Yes, I was sick, but I wasnt about to miss "Rock of Ages"... especially with our seats being in the 2nd row.  So I dosed some extra Advil Cold & Sinus & off we went.

You knew it was going to be different when they hand you the program, along with ear plugs!!! No joke!  We were laughing so hard at that... & then we got to our seat & saw we were RIGHT IN FRONT of the speaker & I thought, hey, with my ears hurting already, I may need these.
For the record, my 80's rocker side won out & I didnt need them!

The other thing that you noticed before it started was no orchestra warming up... but instead, sounds of Def Leopard, Whitesnake, Poison coming out of the system.  People were singing & having a great time before the show even started. 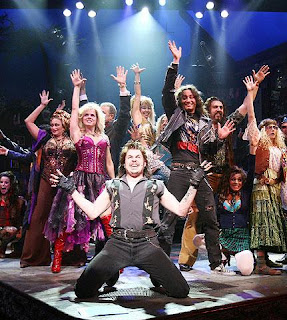 I told Ricky when we walked in though that I know they thought he was probably a "plant" in the audience since we were in the front & there he was with his long hair & a black leather jacket... he personified ROCK!!!  He did get the glances!  But he wasnt the only rocker around... lots of long-haired men were around us.  One guy with short hair even spray painted his blue... not what you'd probably see for Les Miserables...

The show was HILRIOUS!!!!  The "narrator" (which is the guy in the black shirt) was the funniest thing I've ever seen.  He even interacted with the audience, which made it even awesome.  And the "Hippie" was also too much fun!  Put them together & I laughed so hard, I was coughing my sick head OFF!!!! 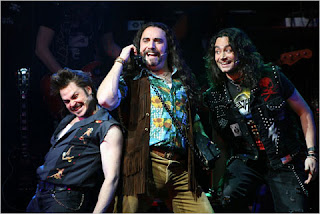 Constantine... Constantine... Constantine... He is just adorable.  Boy can WAILLLLLLLL... I wasnt his biggest fan on American Idol.  Come on - he was on the year Bo Bice was!!!  But he totally redeemed himself here.  He can SING... & sing rocker, 80 style!  This is the perfect job for him... its gotta be fun to do that for a living.... & yes, at one point, he sat down on the stage to sing a love ballad & since I coulda jumped up & hugged him, I have to say, we locked eyes... leave it to me though - he's singing this beautiful 80's ballad (which will always be the best ballads EVER) & I started laughing :)  He turned his head & didnt look back... I'm, if anything, a great distraction! 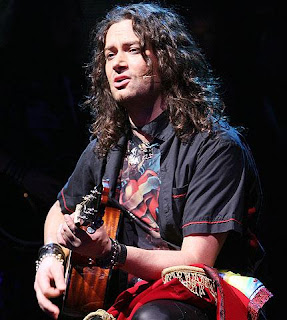 To say that this show isnt "kid appropriate" is an understandment though!  Even on the web site, it says, "With its abundance of T&A (but mainly immature) content, consider this a good night to call a babysitter.  Besides, the lyrical genuis of bands like Twisted Sister & Asia is wasted on the young." .... T&A ... umm, yeah!  Every female role, except one, plays a stripper... & the one role is the leader of the strip joint... & we were in the 2nd row & was so close that I told Ricky, "Um yeah, brazilian waxes must be an expense on this tour"!!!

I dont get embarassed easily but some of the moves, again, right in front of us, had me turning my head & saying, "OH MY GOSH!". 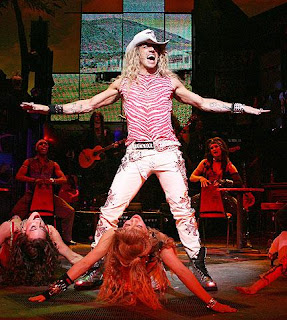 At one point, one of the ladies had come off the stage & was literally arms distance from Ricky.  She bent over & slapped herself on the butt right in front of him & then started rubbing her chest.  I had to laugh at Ricky because he literally turned in his seat, AWAY from her & he turned like 20 shades of red.  If you knew how embarassed Ricky can get, you woulda laughed at him too... poor guy...

Ricky surprised me by buying me the soundtrack when we left ... over 75 minutes of the music on this CD by the original cast - so all the fun, I got to take home with me & replay it over & over...

PS - for the record, Ricky & I already said if our little acting daughter, Lindsay, says she's trying out for a role in "Rock of Ages", we'll be chaining her up in our basement! :)