Friday... first full week of June.
How is that possible?
I know we're going to blink & its going to be the Holidays..
(did you all cringe like I just did?)

Let's not worry about Christmas trees yet
let's frag!!!

Yes, we're still on the car-hunt
& I have said more then once that I truly believe
that car salesmen are sucking my will to live.

I had my heart set on a Ford Escape, but the more I test drive them,
the more I'm not sure that's the car for me...
EVERY ONE of them has had something weird wrong with it on the test drive
Except one... that I LOVED!!!!
But they wouldnt even deal on the price.
Hello?  Do you NOT want to sell the vehicle?

But I ended up driving a sporty car
... & kinda liked it...
so now, my eyes are open to ANYTHING
SUV, car, truck, motorcycle
Bring it on

But that just means even more car lots to visit
Lord, give us strength

I've got to find some answers
... that means to Pinterest I head today...

I got some little cucumbers in my Co-Op basket yesterday

Arent they the cutest little boogers? 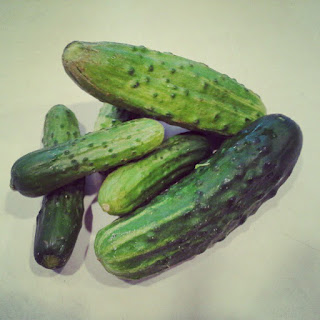 When they handed them to me, I said,
"Oh, PICKLES!"

She said, "they'll be pickles if you know how to pickle"
I kinda gave a "That's what I meant" look

But now - I want to know how to turn these into real pickles...
And as I go to the Bible for answers on life
I will go to Pinterest for answers on how to be crafty & domesticate

Anyone have any thoughts? Tips?

Summer time
Which means LIFETIME TV is on at my house

DROP DEAD DIVA!!!
Anyone else watch it?
Its fantastic
except that they have Kim Kardashian on it
HUH?
Now wait - I'm a Kim fan
Think she's beautiful & am fascinated by her life
But an actress?.... NO!!!
She's a better actress on her reality show

and DANCE MOMS!!!!!
They need some new batches in though
Still love to watch the routines at the end... amazing kids...

Dont they know 'So you think you can dance' is on tv now?
& that me, being the dance pro that I am (not really)
that I HAVE to watch - to critique & yell my opinion at the screen?

We can only get it on one old tv that uses Rabbit Ears for an anetenna
Its the TV in front of my treadmill in the basement
I may have to pull up a bean bag & adjust the rabbit ears
... feel like I'm a teenager again....

You know I had to put another up this week...

Kinda true, huh?
I'm not sure I did know how to spell 'ridiculously' before...
or 'photogenic'

Want to see something disturbing?

There's an app out that makes people AGE?
Are you kidding me?
I'm seeing the app 'live & in person'
I dont need to envision what I'm going to look like in another 30 years

I think it bothers me because that picture of Sophia?
That's exactly what I look like in the morning NOW!!!!

SPAT OF THE WEEK:  RUNNING ON THE ROAD!!!!!
So as you've been seeing, the Hubs has been pounding the pavement with me
Great to have his company with me
... but he's new to the road...
& what a road we live on too

But you have to be careful on these roads
& having run them for 4 years now - I kinda got it down
I stay on the left side of the road on flat even ground
then you can see the cars coming at you & if they dont see you,
then you know you can get out of the way
.... better then you not seeing them come up behind you & them also not seeing you
that's a bad thing waiting to happen

BUT... if you go UP a hill, I get on the right side
because these cars are like DUKES OF HAZZARD
coming over the hills... jumping them...
I think I even hear a YEEHHHAAWWWW sometimes
... & see a Boss Hogg white hat in the window

ANYWAYS...
Ricky is constantly jumping from side to side when a car comes
Not even looking behind him when he runs from the left to the right

In the end, the winner will be the one who doesnt get hit by a car
Want to take bets on who that will be?
& no - to win this bet,
neither one of us are allowed to shove the other in front of a car


Hope everyone has a fantastically fabulous FRIDAY!!!!