I know some people will totally be like "Are you crazy?"... & I know some of you are secretly agreeing with me.  You don't have to come out of hiding.  You can stay safe in the world of Thanksgiving wonder & let everyone think you are blissfully enjoying the day....

I will go on the record & say the only thing I do remember liking about Thanksgiving was my grandma's dumplin's ... & yes, that's dumplin's with no "g" ... its good, old fashion, country cooking dumplin's ....those made the holiday perfect & I used to actually look forward to eating them like I'm looking forward to this weekend to see "Catching Fire".  The anticipation!

Maybe because when I was young, I had a job at a grocery store.  You ain't worked a job unless you worked in a grocery at Thanksgiving.  People are in a hurry, people are loaded with food, people are grumpy. 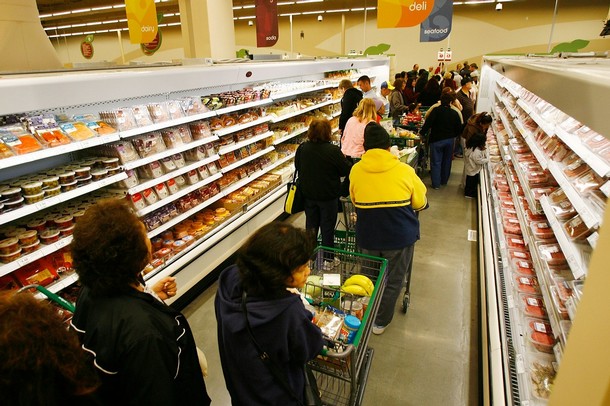 I can remember being out to dinner with my mom & dad the day before Thanksgiving.  We had to run in the grocery so my mom could pick up something quick, like cool whip for pie... the store manager saw me walk in & put me to work on a cash register because the store was nuts.  Its chaos.

People are making a big deal about stores being open on Thanksgiving.  Hello?  I was 16 about 25 years ago & & guess what?  The grocery WAS OPEN on Thanksgiving!  At least till noon.  So I had to work on Thanksgiving most years.  ... again, with crazy people who need last minute things.  Talk about worn out.

I'm thankful for ANY time our family gets together for dinner... not sure what makes one dinner in November any more special.

You know with me being a vegetarian, I've gotta add the obvious thing.... all the killings of poor turkeys.  I will say, I'll go with a Chick-fil-A thought & say that the cows get a break for the day, but still, poor turkeys everywhere are shaking in fear....


I just see people already stressing about the holiday... where to go, all the travel, what to cook.  Doesn't sound like a 'thankful' few days building up to it, does it?

To finish up with my depressing Thanksgiving post - is it me or isn't Thanksgiving supposed to be the 3rd Thursday of the month?  What the heck happened to have it on the 4th Thursday?  Who decided that?  Who declares what day Thanksgiving is?

This is how I felt when I saw Thanksgiving weekend actually goes into December!

But to take my own thinking & to be thankful every day, I will say a few good things about the day...

1. I do love watching the Macy's Thanksgiving Day parade.  My favorite is when they do Broadway show songs!

2. Its my cue to officially start listening to Christmas music full time.

3. SALES SALES SALES!!! I will be out in the Black Friday chaos trying to find a deal or two... makes me feel accomplished for the year if I get at least one killer deal.

4. No judgment if you go through the grocery line with 4 different kind of pies... Apple, Cherry, Pumpkin & Pecan... get in my belly

6. The start of fun Christmas shows on TV... Hello "ELF" being on TV every night on some station.  I never get enough of it.

So what about you?

Do you LOVE Thanksgiving?

Are you a secret closet Thanksgiving hater?

Come on, you can admit it - what stresses you out about the holiday?