With MTV VMA's this weekend... which I didn't even watch... I am inspired by music this week... so let's confess some things about MUSIC today


... One of my first albums was Stryper, To Hell with the Devil... & Whitesnake's album - the one that had all the songs Tawny Kitaen rolled all over the cars with.  Could you get two more opposite albums?  Definitely showed I loved hair bands. 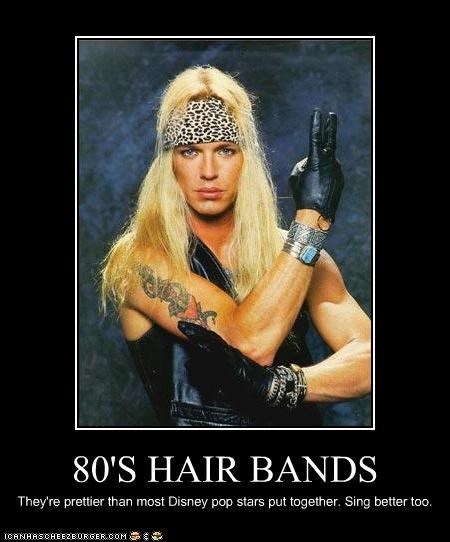 ... I always used to listen to my brother's Hall & Oats albums.  They were just here in concert a few months ago & I really wanted to go see them.  Hall & Oats had a lot of good songs if you look over their play lists.

... Yes, I was a New Kids on the Block freak in the 80's.  I never could pick a favorite though. Love the bad boy, Donnie but I always loved Jordan.  Who doesn't love the front man?

... I have a memory of Dolly Pardon always playing growing up.  She's classic.

... I take the first comment back - I remember my FIRST album.  It was a kid's worship album by the Gaithers.  & do you know I can still sing some of the songs from it.

... Country music was always coming out of my dad's garage.

... I always hated country music, but some of it has grown on me through the years. I always said its a true sign that I'm aging.


... I had a poster of the Monkees on my wall as a teenager. Yes, I was a teen of the 80's but Davy Jones just made me happy.  MTV had a thing in the 80's where they would play The Monkees episodes over & over. I was hooked. I saw the Monkee's in concert 3 times in my life.  Davy Jones and Mike Nesmith both share my birthday.  I am still in mourning that Davy Jones passed away.

... Let's not count how many times I've seen Steven Curtis Chapman in concert...

... Steven Curtis Chapman & KISS were both main staples in our wedding.  Perfectly describes who Ricky & I are.

... I never knew I could know so many KISS songs until I married my husband

... He never knew he could know so many Steven Curtis Chapman songs until he married me.

... If you put my ipod on shuffle, you would probably get every genre of music song after song.  I really do love it all...

... except Jazz. I hate & loathe Jazz. I don't understand it.  It only makes me want to pull my hair out.


... I don't understand how people sit in an office, or in a car & don't have music playing.  I think that's a definition of insanity.

... I've always been a fan of soundtracks from movies.  Its a way to get a variety of songs in one place.  Clueless, Dirty Dancing, A Walk to Remember & Charlie's Angels are some of my favorite.

... Disney soundtracks are on a whole other level.  I will never be too old to break out in any Disney song that is played.

... At a wedding or a funeral, I'm usually good until I hear the first beat of a song.  Music makes me cry the most at emotional events.

.... Elvis "Always on my mind" is probably one of my favorite all time songs.  I kinda like the Willie Nelson version too.  I think I loved this song after seeing the movie about Elvis & Priscilla where he recorded it to try & get her back.  I'm a sucker for a love story.

... I feel so un-American when I say this, but I'm not a huge Stevie Wonder fan.  When they would have Stevie Wonder nights on American Idol, I would just turn it over.

... Speaking of American Idol, Bo Bice, Clay Aiken & Colton Dixon were some of my favorites.

... I love Song Pop on Facebook just to remember old songs I haven't heard in forever.  Anyone else play?

... Songs from the 80's can instantly take me back to my teenager years.


What's your favorite kind of music?
Does music bring back memories for you?
Does Taylor Swift irritate you too?