The weekend I had hundreds of strangers sweat on me.... Ironman 2014

I had an amazing weekend.  I could talk about Saturday & the trip Ricky & I had to our State Fair (which by the way, I didn't eat one nasty fried piece of food there... blah)... but this weekend was all about IRONMAN LOUISVILLE to me...

My morning started early with me watching the swimmers get in the water & start their day.   It blows my mind how early these people start & how long their day is ahead of them...

The heat was still there... but the temperatures dropped to 92 degrees. YAHOO!!! ... (insert very sarcastic attitude)... at least the heat advisory did actually drop.

Truth be told, I did think it was hot, but it wasn't as bad as I thought it was going to be.

That is, until I stepped into the tent where I worked for the day...


So yeah, I choose to work hands on with the women athletes in the tents as they were in T2 (Transition 2)... I feel so technical saying T2.  But these women were coming in from a 112 bike ride & were sweaty & exhausted, & we had the job of helping them change & prepare for a 26.2 mile run.

Because its basically a changing area, all the tent had to be enclosed.  In a 92 degree day, an enclosed tent is basically like 105 degrees inside... with no air... It was stifling.  It made walking outside waiting for the next person feel like it was paradise.  #perspective

I wasn't sure what I was supposed to do with this being my first year in this area.  I literally got a brief overview that took 15 seconds & then they said, just follow someone.  So I stuck with a few of the ladies dripping in sweat - I knew they had been there for awhile.

I was told the first thing was to give them a cup of water, ask if they wanted some cold water thrown on their back, take their helmets & their gear & help sit them down... then the goal was to have them talk to us, make sure they were making sense, see if they had any injuries, anything that needed assistance.  & then just help them change.  Whether it be just changing socks, shoes.  Getting their hats or visors on them.  Lathering them up in sunscreen. Even stripping clothes off of them & putting on clean clothes.  Which, have you ever had to take off a sports bra or put one on when you have sweat all over your body?

Let's just say, by the end, I was the PRO at stripping off bras & putting them back on people.  #newjob  A lady even told me when I put her bra on her, "I had no idea it could be that easy.  Can I take you home with me?"

It started off being slow enough where 2 people could work with one person at a time... but the crowd zoomed in & everyone was 1 on 1 with each athlete.  I even at one time was working with 2 people at the same time.

You had to make sure they had everything they needed, make sure their bib was tied around them, & then make sure all their gear they left behind was put up & back in their bags & ready for them to pick up at the end of the race.

Why did I love it so much even though it was awful in the heat?  Those one on one conversations I got to have with women.

Someone said, "oh, you're working in the tent?  People are going to treat you like dogs in there"... I know every person I worked with, & all the other volunteers agreed, every single person was so appreciative & kind to us.

I saw a girl who looked like a baby... turned out she was 23... but I told her I thought she was 16 & I wanted to give her advice on being careful out there.  She hugged me & said, "Thanks, I needed someone to tell me they cared"

I had a woman who was from Scotland that we got talking about accents.  I told her that I loved hers & she said, "You definitely have a Kentucky accent"... then we started saying words the same to see what each sounded like.

I had a lady who came in whose daughter had come through earlier.  She & her daughter had trained together & was excited to do their first Ironman together.  Her daughter was way ahead of her but she left a note in her mom's bag that I pulled out & handed to her & said, "you may want to read this"... her daughter drew a picture of the two of them crossing the finish line together" & it said, "I may finish before you, but I'll be there waiting on you"... the mom started crying... so of course, I started crying... & then quickly wiped away her tears so we could keep her dry

I had quite a few people who had notes from loved ones tucked inside of their bags for them to read...

I had a lady who scared me & I had to call medic on.  She wasn't talking right & she couldn't get calmed down.  The medics gave her salt pills & Coke to try & get some things back in her system.  She just was not doing well.  They talked her into going to the medic tent & letting them check her.  When she was panicked about having any penalties or being pulled, I sat & talked with her & told her she would be fine, but she needed to be safe & smart.  I got her laughing a bit & then she agreed to get checked.  I prayed for her... I wonder if she finished.

I had a lady whose feet were so swollen after her bike ride, she couldn't get her shoes on.  I had to rub her feet & massage them until she could bend them a bit to get circulation back in them.  In the end, we gave her some pickle juice to get cramps from over taking her & getting her body moving again.

I had a lady who was a total diva.  She brought a Princess towel, had to change her full wardrobe, even brought make up & a brush & redid her hair.  I laughed & said, You are coming in here totally prepared.  She said, "Looking good makes me feel good"... whatever works for you lady.

I saw a lady who came in at the end who was struggling.  She sat there for about 10 minutes & kept saying, I'm not sure I can finish.  She had to be in her 60's.  I knelt down to her & told her that she had to make the decision but whatever she decided, she already completed the swim & the bike portion - something I have never done - something I could never imagine doing - that she was amazing no matter what decision she made.  I saw someone walking her out of the tent.  Not sure what she decided. 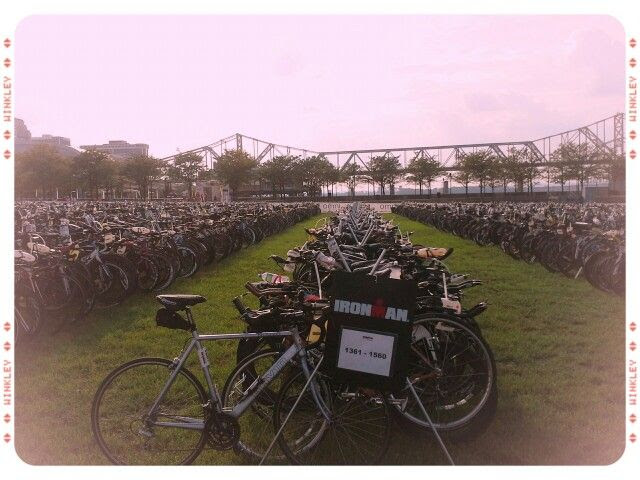 I loved it because their names were on their bibs & as I wrapped them around each persons waist, I made sure to see their names & then use it.... making it personal.  I'd hug them or pat them on the back & say their name & tell them to finish strong / have a great race / you are amazing... always leaving them with encouraging words.

I figured up a few things to let you know if you want to work in the women's' changing tent.

You DONT want to:

This is what I got on a picture I put on Instagram last night... 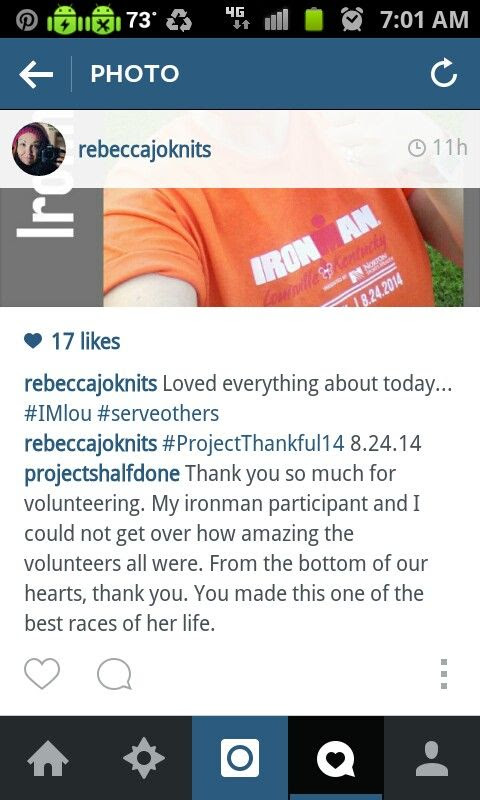 I think all the volunteers had the same attitude... making the race better for these amazing athletes.

I spoke with a lady who traveled down from Indianapolis to volunteer.  She said she was going to work the course but then realized how much they needed tent people & she said, "I thought, this is what it is to serve others. To be hands on.  To really be a face of Jesus"... I loved this lady.  & I just said to her, "Amen"... it honestly was a spiritual God-given moment to me as well.  To look people in their eyes & help them.  To encourage them. To even say quick prayers of safety over them as they left.  Serving doesn't have to be in mission fields to spread the love of Jesus.

At the end of my shift, I was a sweaty, stinky, tired, but it was the best feeling.

I got home, took my shower & got ready for bed.  I kept thinking of the people STILL out running on that road to the finish line. I pulled up the web site & watched the live feed on the finish line.  I actually saw 2 of the women that I helped get ready cross the finish line.  I was like, "I KNOW HER... I KNOW HER"... I felt proud myself to see them cross & hear those words, "YOU ARE AN IRONMAN"

A total stranger to me... but someone whose life crossed mine... even if for a few minutes.