The weekend I had a crudtastic race....

So I'm trying to get back to real life...
except there's this whole "my mouth feels weird" & "I'm still afraid to eat" thing happening.

Friday, I headed out at lunch to pick up my race packet for the final race of the Triple Crown... the Papa John's 10 Miler. Or as I call it, "The most despising, hated, horrible, miserable race that exists". Sounds like fun, huh?

Someone asked me if I hate it so much, why do I do it?

Well, mainly because its the last race of the Triple Crown & I like doing all 3.  Why? Because a t-shirt is involved.  I'll do a lot for a t-shirt. But mainly because in my half marathon training, it always falls right when I need to do 10 miles anyways - so why not do it where people are handing you water & cheering you on & you get a medal?


It just so happens this 10 miles is also in a park with horrid hills that I just dont care for.

But let's back it up.

Friday, I went to the packet pick up with still no wonder if I was going to make it to the start line of the race.  I mean, my mouth was still killing me - the hole is still in my gum.  Plus, the pain has been more intense on Wednesday & Thursday than it was the day of the procedure.  I am still scared to death to eat normal food so I've been on a liquid diet all week long too - & I can feel the lack of nutrition.  I think one day, I literally got something like 9 grams of protein. I'm supposed to get like 95grams. Yeah.... I've just felt blah all week. Plus, I tried working out ONCE & it was awful. My jaw was aching so bad - so I hadn't worked out, nor ran, all week long.

You can see why I was leery about showing up at that start line.

But I set the alarm anyways... & Ricky told me that we can do it.  Even if it was just me walking, I can do it. He was my biggest encouragement.  Mainly because he knows me - I would beat myself up for not doing it in the end.

So we get up early & I get my knees all held together with KT Tape & we head to the start line.

Everything seemed to go really smoothly on this race morning - a rarity.  We got there in plenty of time, got a good parking spot, missed traffic by coming in the back way, got to the start line with just 5 minutes before the gun went off - everything went perfectly. 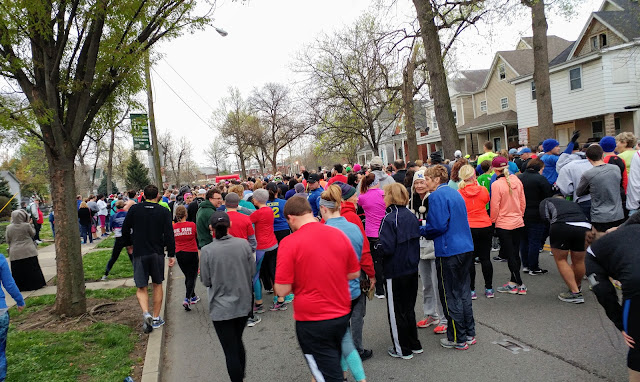 I just felt so blah from the beginning.  Instantly, I could feel the heart beat in my gum where the missing tooth was.  It wasn't horrible.  But it wasn't comfortable.  & then we got to about mile 3 & I was like, I'm not going to be able to do this.  Ricky again, being my biggest cheerleader was just telling me that he knows I have the strength to get through this... & in reality, we were at the point of going into the park - it was just pressing through & making it out to go back - or turn around at this point which would have been so disappointing. I still mostly wanted to chose to turn around....

but I'm all about PRESSING ON...

& then got on the back side of the park & was wanting to punch myself in the face for being so stupid.

MISERABLE.  I was miserable.  I had to walk the majority of the park. Even running on the downhill had my jaw throbbing.  & when we got out of the park & I hit mile 7, I literally said in tears, "I'M DONE - I'M DONE - I'M DONE!"... like screamed it.  I just wanted it to be all over with.

I told Ricky I was not running another step.  I basically was like a child throwing a fit at this point.  But there was no option but to walk the direction we were going to get back to the car - so Ricky told me we were just going to enjoy the walk.  No pressure - no hurry.  My time was already screwed. At the 10k mark, I was already like 8 minutes slower than my time from the last week ... & getting slower by walking.

So we just held hands & walked.  It made it easier. The pity party ended & we just had fun talking & watching squirrels fight... & I got to show Ricky a house that I love every year.  They have no grass - their entire front yard is flowers. & they bloom for only a few weeks & then its just like dead flowers in their yard. So bizarre.... but so pretty those few weeks of the year. I was glad to get a picture of it this year. 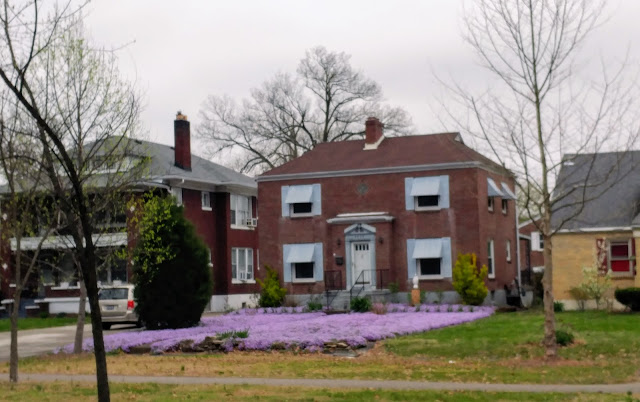 & then we were watching all the policemen on the road putting up ribbons on the trees.  See, in our town, a police officer was killed in the line of duty.  So horrible. He was a young man with a young family... he has 2 babies with one being a few weeks old.  His poor wife.  But they were going to take his body on a route that afternoon around landmark areas of his life.... & that area where we were running was where he grew up.  It was something to see all the blue ribbons on every tree down the road. 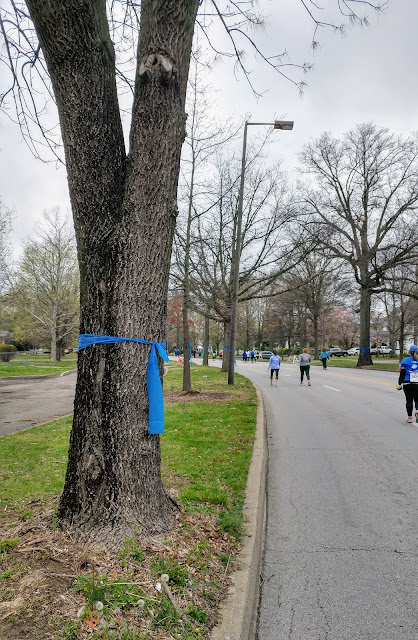 Finally - FINALLLLLLYYYYY - we were coming up the hill to the last mile.  At this point, it was almost comical what my time was & we even stopped mid race to take a picture of the finish line behind us.


& as we rounded the corner, Ricky told me, let's run. I got tickled because I tried to run & I felt so weak & no energy & my calves were cramped & I just felt like I had never ran a day in my life.  I dont know why it made me laugh so hard... but I got so tickled that it pepped me up enough to run the last quarter mile to the finish.

& in all honesty - I didnt even care.  I usually pout about horrible times & kick myself in my head... I honestly didnt care.  I was just proud I made it through after the week I had.

Though I have to admit, at the end, I was questioning if I'm going to do the half marathon coming up in a month. Ricky kept telling me I have a month to heal & recover & I'll be fine. I just dont want to feel this bad again in a race & I'm afraid its going to be just like this.... blah... I guess I'll cross that bridge in a few weeks.


The best part of this race... when you do a Papa John's 10 miler, you get Papa John's pizza at the finish line.  Me? I'm still afraid to eat anything chewy so I just went for the banana & Gatorade & told Ricky to eat a piece for me. He was happy to oblige.  Poor guy earned it.

& then we walked backed to the car & I told Ricky, "let's run it"... & got tickled all over again at how sore my body was.  I think the crazy was leaking out.

The rest of the day was low key for us.  I had some plans for the evening that fell through, so we just hung out around the house.  Ricky took a nap while I knitted & watched a documentary on a guy that lived off of Craigslist for 30 days.  Crazy to me - people are so trusting.... I would have ran into a murdered for sure if I tried it.


Sunday, I headed to church & so glad to see my MSM girls since I missed the week before.  I ended up getting both 7th grade groups since the other group's leader was on Spring Break so I had nearly 20 girls... & it ended up being some great conversation about what Jesus was like as a teenager.

I ran to Target after church to pick up some dog food & some more soft food (I dont think I'm ever going to eat hard food again) & then couldnt help myself but treat myself to some goodies.  Ricky just shook his head when I showed him my new Beast & told him he had to tell me how cute he is!!! 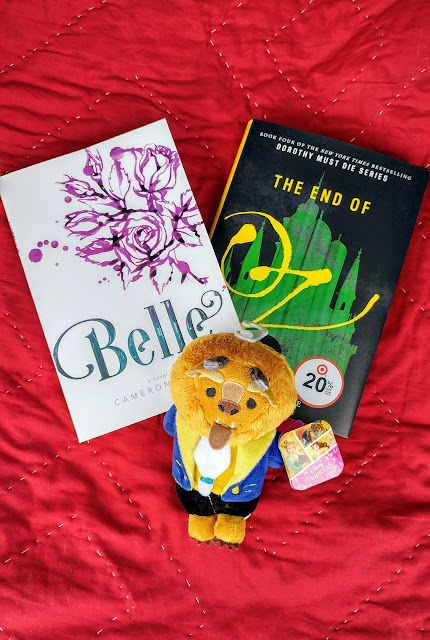 It was such a beautiful Sunday... warm, sunny... perfect.  So I took advantage & took my book in the back yard with my fur babies & soaked in the Vitamin D


It was such a pretty day that I went ahead & put together a stroller that we had gotten from Amazon.  The intentions was to put Zoe in it since it zipped up & then we could take Bruno in his cart.  Zoe wanted nothing to do with it.  She kept trying to find a way out of the covered up netting (we put the netting in because I knew she'd jump out)... she was pressing her face against it with the most pitiful look & then tried to bite her way out of the netting. So the stroller aint going to work for her.  We tried it out with our little grumpy old man... he's all about it. He loves anything where he gets to venture out but exert no physical activity.  He's my spirit animal.

& then we got to go over to our neighbors where I got to pet on some baby chickens & see the biggest rooster I have ever seen in my life! & then even get to touch a turkey!!!  So many animals for me to love on!!!!  They are expecting some eggs to hatch soon too.... baby alert around these parts!!! I'm all about any animal creature being born.

& then got strapped in for the WILD RIDE of the finale of THE WALKING DEAD..... I think I'm still holding my breath!!!!!!! #teamshiva

But a lot I guess was accomplished.... & while I was in some pain, both physically & dentally (is dentally a word?) ... & hungry... I felt a little bit of pride... & disappointment.... a roller coaster of emotions - just another weekend in the life, right?

Would you push your animal in a stroller?