The weekend that lazy slammed into my back....

I just want to know what happened to Spring?

Seriously... I sat in my house freezing, with the heat turned back on.  This isnt funny Mother Nature.

This weekend was one that originally started out one way & ended up a totally different direction.

I originally had 2 photo sessions scheduled but when the forecast turned on me, they got rescheduled & I ended up being a slug... & that's not a good thing. I was supposed to run 5 miles for my last long run. I'm telling y'all - I just couldnt make myself. Especially when it was cold out... & my treadmill has been threatening to throw me off of it (truth)... but we'll get to that in a second... but spoiler - I totally skipped my long run. for the 2nd weekend in a row..... BUTTTTT for the record, I'm going to try & get in my long run today since the sun is supposed to be out for the day & warm temps are creeping back up.

Anyways - Friday was the usual... grocery shopping, Penn Station with the hubs (this is really becoming our Friday tradition) & a bunch of lazy happening into the night.  Mainly because the hubs had to work on Saturday morning so he was in bed extra early, & when he's in bed, I dont want to bother him so I basically just keep the lights down in the house & do my old lady activity of knitting.  It's quite.

I ended up catching up on Trial & Error.  Anyone else watch that?  It reminded me so much of Park & Rec or The Office. I laughed so hard at it. & it looks like its going to come back... probably minus John Lithgow... but the rest of the cast is just as funny.

Speaking me of trying to be quiet when the hubs is trying to sleep - I was laughing so hard at this, it woke him up & he yelled, "Are you laughing or crying?"... it does kinda sound the same.

Needless to say, when he left for work, I was bright eyes & couldnt go back to bed.  SIGHHHHH....

So I do what I like to do on my Saturday mornings... Bible Journal. & this time, I got to play around with these new babies ....watercolor gel crayons 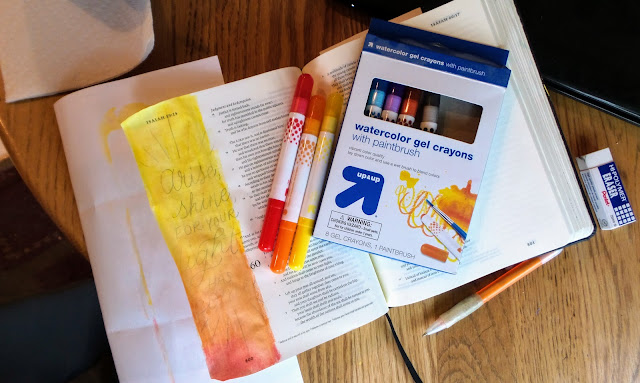 I did a little IG Story on how I created this page too if you're ever interested in my bible journaling....

I loved how the color turned out. 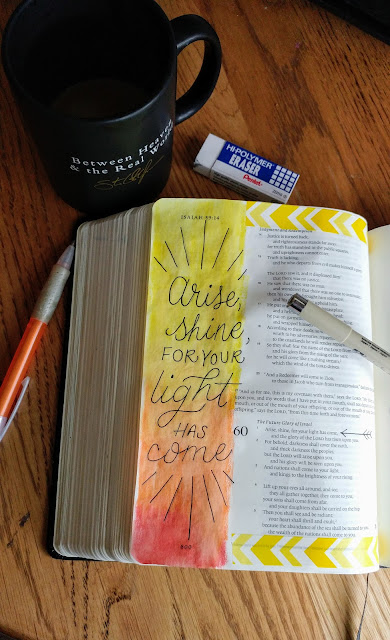 & as usual, when the hubs is gone, I was able to get some cleaning done.  Got a few loads of laundry done... & then he called me & told me to head down the hill - we were going to look for a new treadmill.  YEHHAWWWW....

I had talked about joining a gym since my treadmill was on the fritz & Ricky reminded me how far away we live from the gym & its not really that convenient ... especially on days that I dont want to run outside anyways - cold days, snowy days, rainy days.  He's got a point. I do like being able to get on the treadmill any time of the day in my basement & not give two thoughts about it.

& I get that I just talked about not wanting to run anymore... but I still love a treadmill for walking & getting in my 10,000 daily steps.

So I rode down just to look at what my options were....

ended up going into the Family Christian bookstore where they are on their last week of being open. I'm so dang sad about this.  But came out with a few more goodies with everything being 70% off now.

Then Ricky got off work & met me & off we went looking for a new Milly. 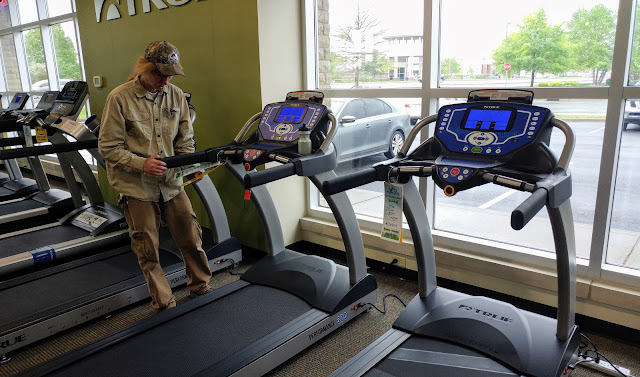 We went to a few places & then I feel like I hit the jackpot!!!! I found one that was on clearance - half off & has everything I was wanting & plus some.  I am so excited about getting it.


After deciding on that (it was like picking out a new car... geez...) I had to calm my nerves down - which means going to a craft store.  I came out with a few skeins of yarn & some lettering tools.

Ricky picked up some Chuys & I met him at home....& that's when the lazy really hit.

I debated doing something active... I mean, I just bought a new treadmill - active should be in my blood.  SHOULD is the optional word there.  Nope - instead, I ended up taking a shower & spending my whole night getting caught up & binging The Imposters. LOVING IT! I got through most of it... still have a few episodes to go...

Our whole area was all excited about Thunder over Louisville - the biggest firework show in the US... me?  I just was happy to be under the covers, warm with my spoiled dog who just wanted to be held for hours on end.... that's the life.


Sunday, poor Ricky woke up just not feeling good. He had a horrible head ache & he's having issues with his hernia again. He's in some serious pain... my poor guy... I'm afraid it could be his appendix too... he's just miserable, so he just stayed home while I went to church.

I left church to go to my women's bible study group. It was the last one in this study we are doing & not everyone could make it so we ended up having it at Q'doba so we could eat lunch together.

I was so giddy excited though when I walked in & saw a familiar face... one of the girls in our bible study group used to be in my youth class - Jordan.... (is this telling anything how old I am and/or how long I've been in youth ministry?)... but Jordan brought in another one of my old youth girls - they are like best friends & I ADORE both of these girls.  I especially LOVE seeing them together.  Their friendship is so special. They just make me so happy ... together? They make me EVEN HAPPIER.  I was expecting to see Jordan. I wasn't expecting to see Carly's face... so when I saw her across the restaurant, I ran across the place & grabbed her & hugged her so hard & didnt want to let go.  It made my day totally.  Such a fun surprise!!!

I was so glad she stayed with us during our study discussion too... I told her she's now a member & she's gotta come back.  It's in the rules ;) haha...I really am hoping I see more of her in our group.  We're such a diverse group of ladies - I know she would fit right in.

It made me laugh so hard though when I was talking about the group of 7th grade girls I have now & Jordan & Carly where saying that they wanted to go meet these girls & tell them what it's like to be a "Rebecca OG"... haha... part of the original group of girls I've had.  I gotta tell you, it made my heart just smile knowing I have kept connection with so many of my girls through the years.  They are all so special to me... truly... 100%

I left our group & had intentions to go to Target but get this... I hurt my back getting ready for church earlier in the morning.

DID I JUST NOT TALK ABOUT JINXING MYSELF?  Yep... I just said last week I cant believe my knee / back / arm hasn't hurt during this training. Let me tell you - my knee popped Saturday night & feels off, my Bicep Tendon has been aching so much, I couldnt knit Saturday night  & yeahhhhh - I put on my jeans Sunday before church & turned & twisted my back. I was in such dire pain after our group, I had to just come home & lay down...

after picking up a Starbucks... of course... 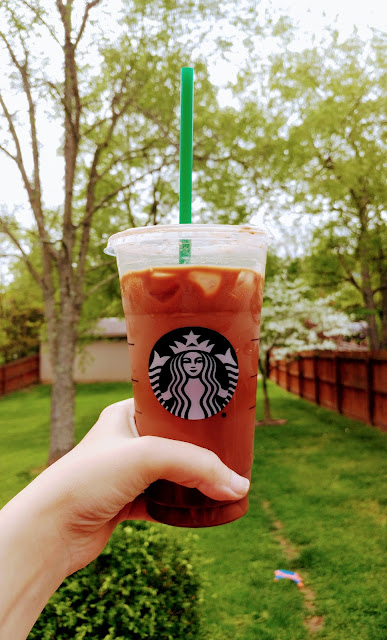 But I KNEW I was going to jinx myself. Why did I even say anything?  I'm hoping its a quick muscle spasm thing.... geez....

So the weekend ended just as it began... on my couch... full of dogs laying all over me... I guess I can't complain.

Is it still warm where you are or you still riding a weather roller coaster?

Did you go to Thunder over Louisville - or even hear of it?

Do you watch The Imposters or Trial & Error?