The weekend that I learned your career isn't everything... in an award for careers.... 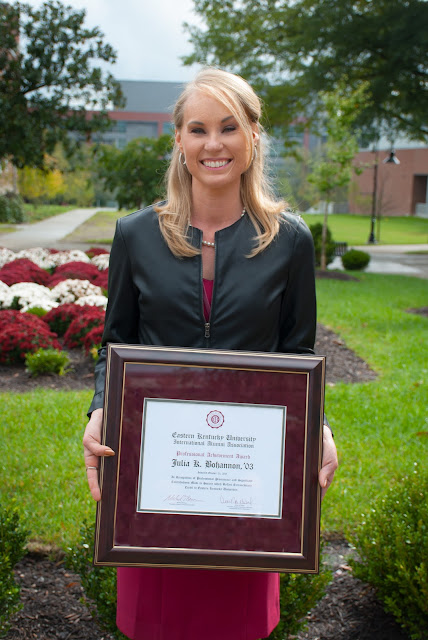 What an exciting weekend.

I didnt think it would BE all that exciting when I got home on Friday, after suffering through the day at work, only to get home & find out that I had a fever, a double ear infection AND a sinus infection. Good times.

But we had to get up at 6am the next morning to travel down to Eastern Kentucky University & I was scared to death I wasn't going to make it.

So what does anyone do in cases like that?  Pop LOTS of medicine, snuggle in bed & go to sleep early.

It didnt help that when the alarm went off at 6am - I still had a fever.... BOO!
Ricky asked me what I wanted to do & I said, "We can't miss this.... I'll dose up on more Advil - let's go".... & off we went - before the sun even came up.  Not exactly how most people enjoy spending their Saturdays. 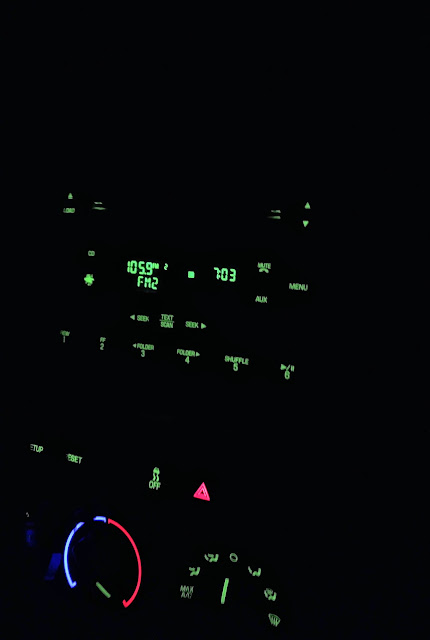 & of course, any early Saturday means we have to find a Starbucks on our 2 hour drive.
For the record - it should be noted - I made a coffee from home & was perfectly OK, but the Hubs was the one who was freaking out trying to find a Starbucks. See, its not just me. 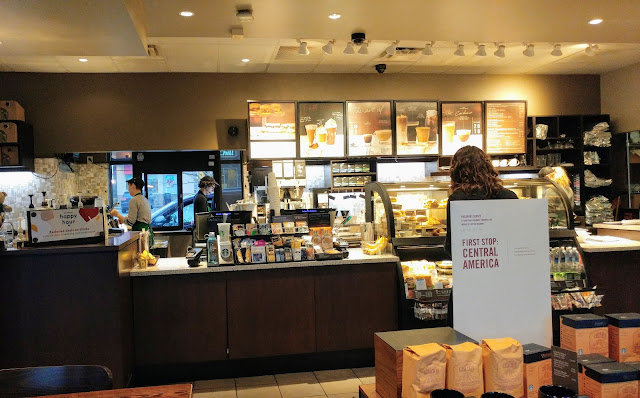 But you can bet that if we were going to stop at a Starbucks, I wasn't going to pass up getting a fresh drink.  The heat from the Flat White actually tasted wonderful on my throat & ears.

The ride wasn't that awful - even though it was cloudy & gloomy & I was looking forward to being able to watch the sun rise on our drive. No such luck. 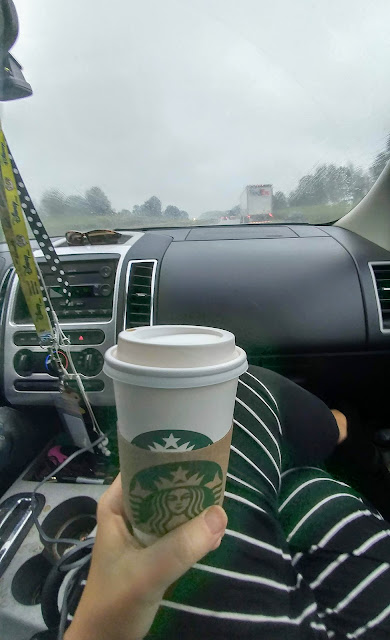 We ended up getting to our meet up point the exact same time as Julie & that gave me time to run into Cracker Barrel to use the restroom when the rest of the Nashville gang pulled in.... & off we went to EKU.

It was Homecoming week there & there was a brunch where they were honoring alumni for various things & our own Ms. Julie was receiving yet ANOTHER award for all her work that she's done.

Let me say for the record, she was in San Francisco earlier that week, left there & went to Phoenix & then got home on Thursday, to turn around & go to EKU for this award.  Did you know that ROCK STAR SCIENTIST EXISTED?  Well you know now! 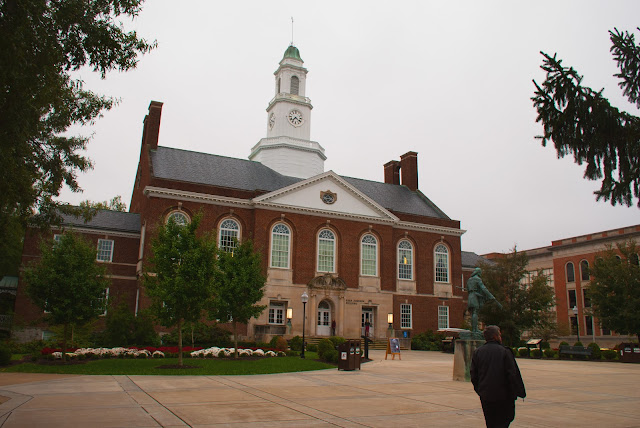 It was fun being on the campus that Julie & Steve grew up together & learned on.  As someone who never finished college or did the whole college life thing, its all so interesting to me to see campuses & how beautiful they are & I get so envious of everyone who gets to enjoy that part of life.

We had to get our name tags & then there was like a happy hour sort of meet & greet - I guess for a lot of the alumni to see each other after another year of being away from each other.... 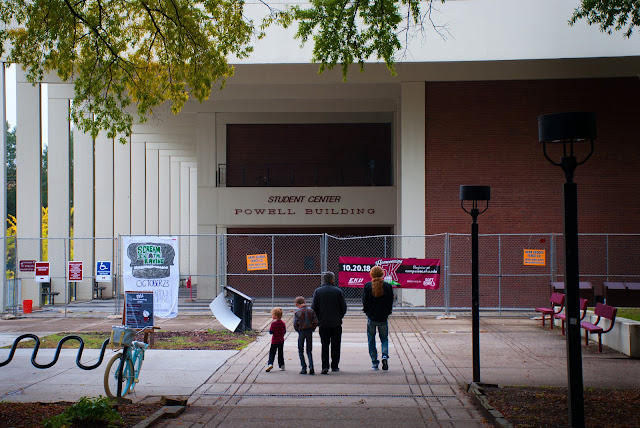 He took us into the bookstore, where - if you can believe it - I bought some books :)   But seriously - they had Disney Art books that are retail at $40 for ONE DOLLAR!  & I got 2 Elin Hilderbrand hard back books - FOR ONE DOLLAR - how do I walk away from this sort of bargain?  & I'm doing college kids a favor - they need to be cracking hard in text books.  Not dramas on Nantucket Island!  It's my public service duty! 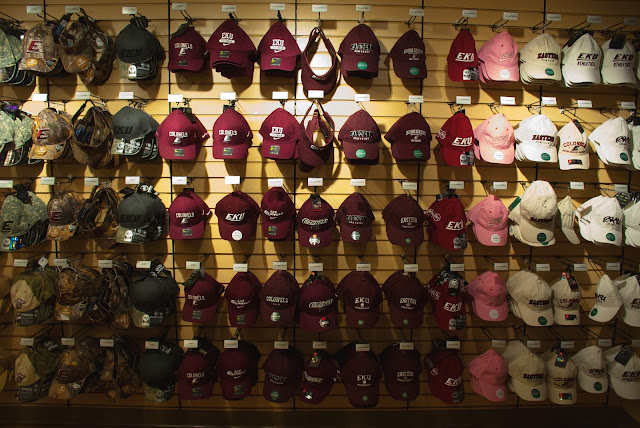 We got back just in time where they were opening the doors for the brunch they were having.  & man, we were super lucky because we had a table right there in the front next to the stage. 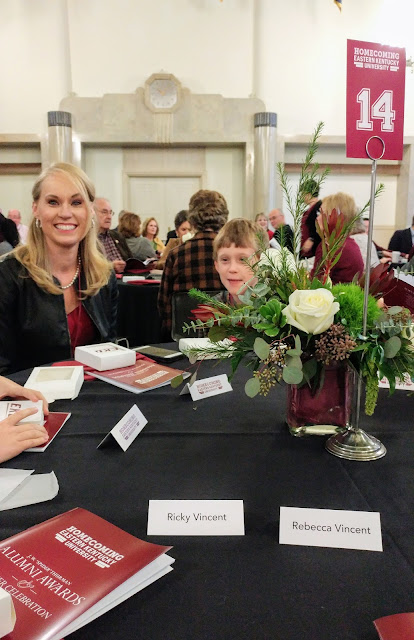 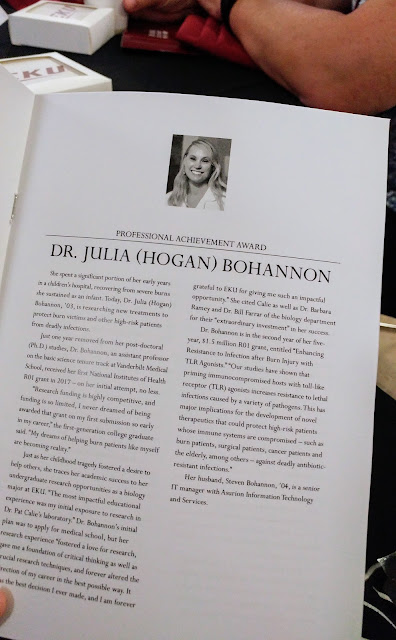 It was such a nice brunch to eat & a nice little program with EKU's acapella group singing for entertainment.  & who doesnt hear acapella & doesnt think of Pitch Perfect? 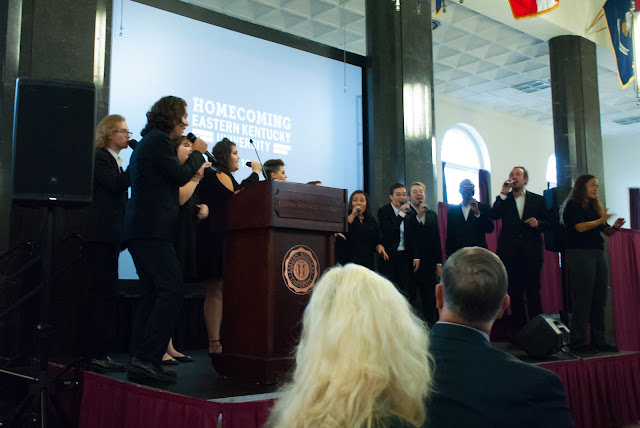 & then it was time for the awards.

So many people doing so many incredible things.  All in different areas of the world & different fields. It was just so impressive.

But of course, we were most excited to hear the accolades of the one we were there to celebrate. 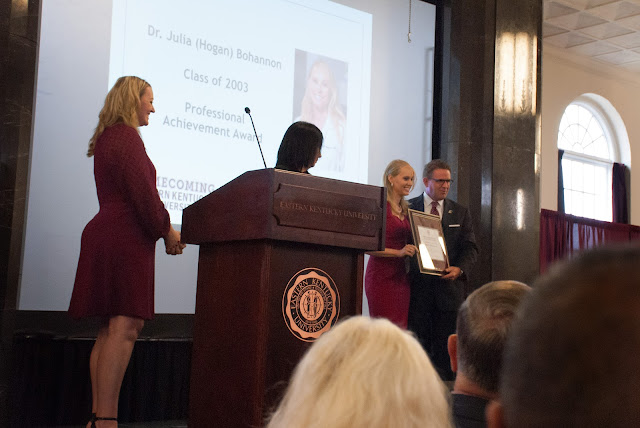 Julie is the youngest recipient ever to get this award in Professional Achievement. Isn't that the coolest thing ever?  That just says how much she's already done in her field of work at her age. SO impressive.

Next up, they had 3 people who were inducted into their sort of "Hall of Fame" of alumni.  These people got to give a speech after they received their plague - let me tell you, I was so taken with what they said.  Not that the speeches were just mind blowing - but that they were all talking about what was important to them.

I mean, there was a woman who was there for her achievement in education - & she had 3 degrees from EKU herself.  Another woman who was a lead in her field in finance & talked about a teacher telling her that a girl can be smart in math was life changing to her.  & there was a man who was decorated in military uniform badges & talking about everything he has done in the defense in our country with the things he has designed & created.

One mentioned God - talking about how dream your dreams because with God, all things are possible.

The other talked about family - & how she loves her career but her family is her top priority - I especially loved a line she said, "Your life is what you focus on"... that's powerful & preaches in itself

& the military gentleman spent a lot of his time talking about his friendship with another military friend who was struggling right now & asking us to lift up prayers for him & he also spoke of work he & his wife did together in ministry serving others & specifically kids  in poor parts of Kentucky during school & Christmas seasons. 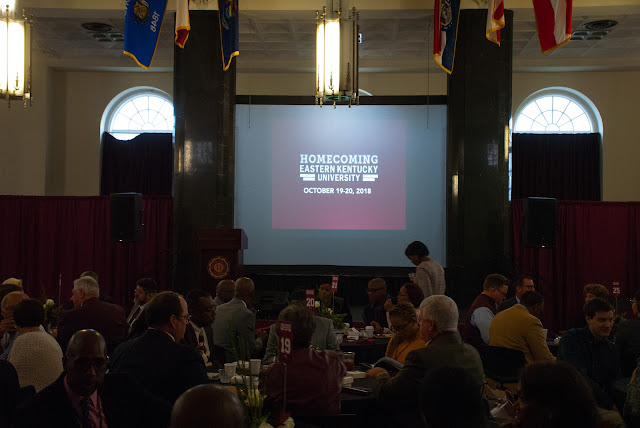 I thought it was so interesting.  Here were 3 people being recognized for what they have done after earning their degree. & they have done amazing things.  Made a name for themselves in all these field.  But to ask them what their important priority is, or what stands out to them on what makes them who they are.... it was faith, friendship, family & serving.

Isn't that interesting... & cool?  To know you can make it to the top of your field, be #1 in your career, but if you dont have the HEART for others, what does it get you?  If you dont have FAITH in something, how sad life can be.  If you dont recognize that family & friends are always going to be there for you, not a job position.  & that giving back to others is what gives joy in your life.

The simple things.  The core things. The things that make humans, well, human.

I thought that was so encouraging to me - & I hope it is to others as well... if you feel like you're not at the top of your field. Or if you feel like you aren't worth anything because you never got that college degree.  If you feel like you are not considered much in this world because you dont have the office job that pays 6 figure salaries.... take heart.  Look to the ones around you that you love.  Focus on the faith you have in your relationship with God.  Learn to love those friendships & others that you can serve.  This is what it's all about.... using life for good. No matter where you're at - no matter who you are - no matter what your career is.

In the end, we left with our family, proud of our girl & all the things she is doing - because for her, she's trying to make a difference for others with her research.  She's trying to find that nitch in life herself on serving others, being helpful, giving hope to people who may not otherwise have it.

& for that, she deserves to be honored. 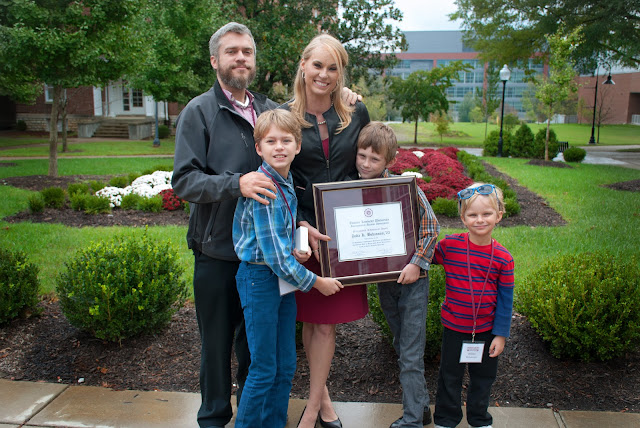