The weekend we made it through a COVID Christmas

We made it!  We survived Christmas!!  I know it was a strange one for us, but honestly, I put my mindset in it from the get-go & it really did end up being a really good one. Could it have been better? of course... but there were moments that wouldnt otherwise have happened had it not been a COVID Christmas, so I was about finding those silver linings & they were shining everywhere.

I'll try & keep things brief because I stepped out of blog world last week & had a 5 day weekend so lots to talk about.... let's try & crunch it together.

When I signed off work Tuesday, I actually had to go get a COVID test.  My first.  I had just been feeling bad for a few days & over last weekend, I felt just rotten.  Turns out, the COVID test was negative - thank God... but the doctor said, "its a good thing you came in"... she said that all she could see were bubbles everywhere & there was so much fluid on my ears & told me "So.... you're ears could be on the verge of rupturing any day now"... WHAT?  WHATTT???   She told me that when there's too much fluid on the ears, it causes the eardrums to rupture - but not to panic, because it will actually bring relief of the pain... BUT, to get back the doctor ASAP to get on antibiotics so it doesn't cause permanent damage.  Geez. Great. Merry Christmas to me. 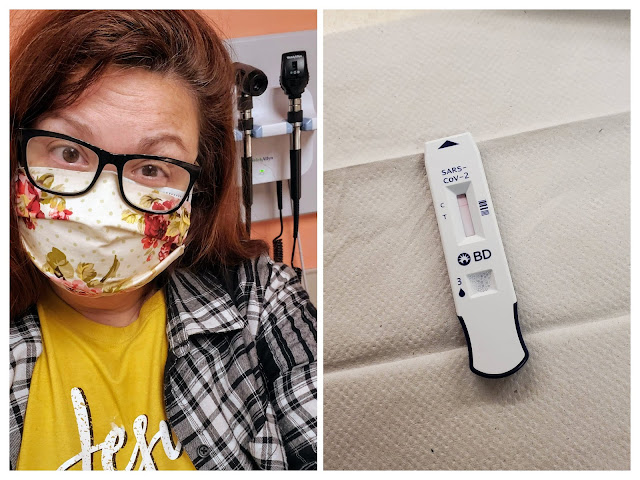 I ended up leaving with a nasal spray I have to use twice a day to try & dry out the nasal cavity & told to take allergy medicine - which I can't because any sort of antihistamine will knock me on my back for days on end.  I have zero tolerance for any sort of medicine.. that might as well be called "COMA IN A PILL" to me.  My poor ears.

I woke up on Thursday & had to fight morning work traffic to go see my cardiologists. I've been having some heart issues lately & went to see my doctor that has been my heart man since I was 15 years old.  Yep, I've needed him for all those years.  Let me tell you - the man must have drank some vampire blood or something in all these years because he looks exactly the same.  His hair, a little lighter - but still looks in shape, no wrinkles... I honestly need to know his secret.

He sent me to the hospital for some blood work - because that's what I need, more blood taken out of me (maybe there is something about that vampire blood theory?) - & scheduled me for some more tests & sent me home with a holter monitor on.

OK... see previously where I say he was my doctor since I was 15... so that's mid 80's.  I remember the holter's of those days.  The kinds that had wires everywhere & they'd tape them together & tape to your skin so you could always feel the pull on your skin if you twisted or moved too much.  You had to wear a cassette player around you on a strap - carrying crossbag style... that was the biggest pain.  You had to sleep with all that stuff on you too!  This new thing?  I had to wear 48 hours & I said, so no bath? & she said, Oh yeah, these were made to swim in! WHAT??? & honestly - it was 3 little wires that didnt go around my body & that little black thing was the biggest part of it. You just clicked that button in the middle when you felt an episode happening.  Amazing.  I honestly forgot I had it on the entire time.... 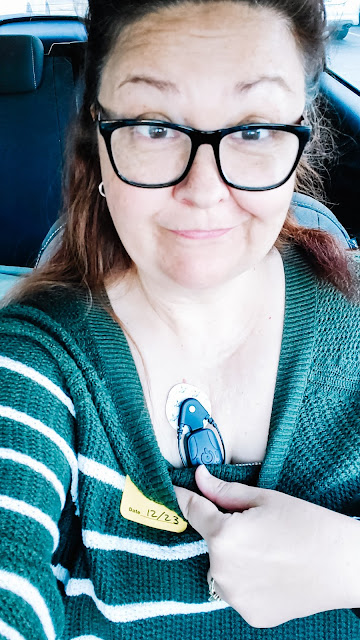 I had the rest of the morning & afternoon to myself so I tried to so some shopping in places I found that weren't busy ... & got The Hubs a pecan pie from his favorite place for his birthday the next day.

I had it setting out so he would see it on Christmas Eve as he was leaving for work.... FUN FACT - you can eat pecan pie for breakfast on your birthday apparently. 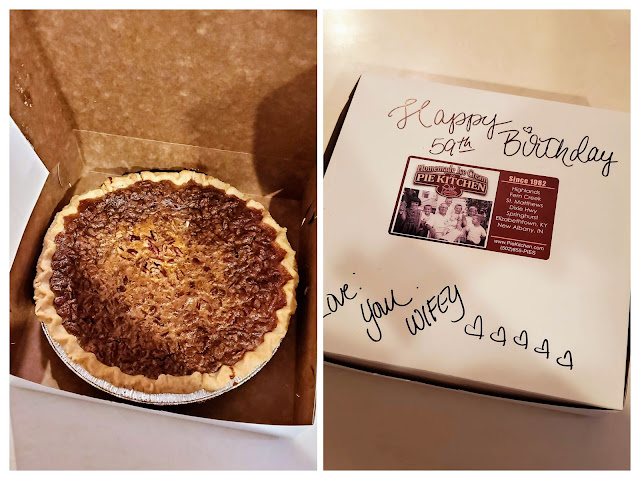 So Christmas Eve, I was going to run out & get some final things while The Hubs was working... but man... these ears.  The world was spinning.  Hard & fast & enough to make me so nauseated.  Plus, that nasal spray was making me sick too... so I ended up just staying at home & ended up getting some baking done.  Good thing I didnt fall into the oven with my luck & dizzy balance.
I ran over to see my momma for a little bit & give her some gifts.  She was doing much better.  She got a new tablet & was excited to play around with it when I left.
The Hubs & I were having a hard time trying to figure out how to do Christmas with everyone with COVID this year.  Ricky's family had canceled because its a pretty big gang all together so we agreed it was the best decision.  Then, for Christmas with my brother,  we were going to sit outside around a campfire but who knew the frigid Tundra was coming down... it ended up getting in the teens & SNOWED!!!!  So everyone put on masks so we could run gifts over.  Made the twins get together real quick so I could document this weird Holiday.
Look at my brother's trees!  He decorated them.  I swear, its such a shame he didnt pursue a job in interior design or something that showcases his artistic talents. 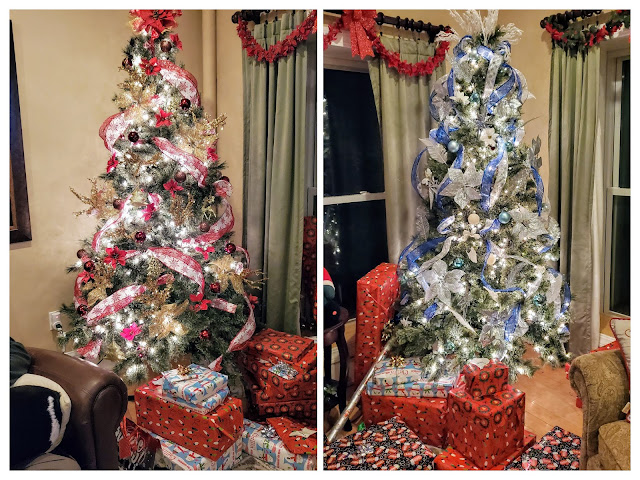 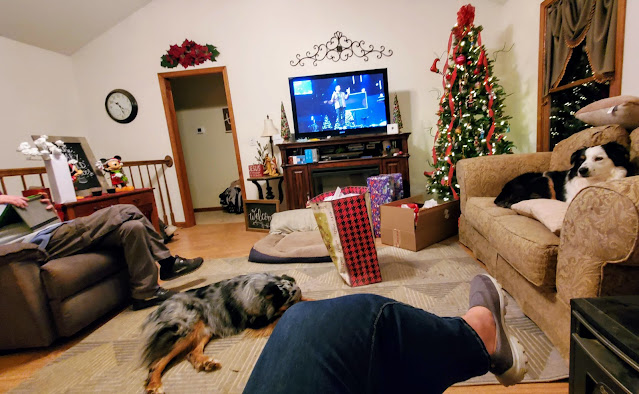 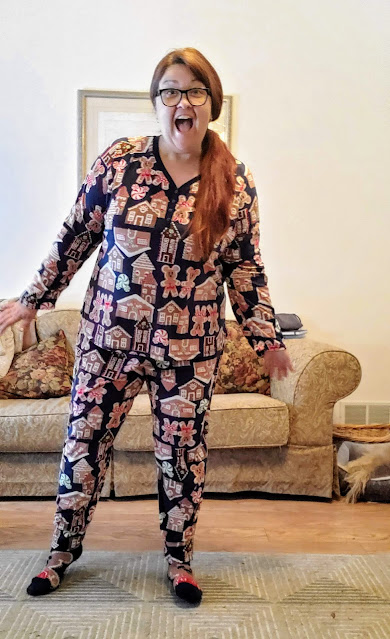 I woke up at 5:00am on Christmas morning & excited to do my tradition of sitting by the Christmas tree with my coffee & just enjoying the stillness. It was even more beautiful waking up to see it was truly a White Christmas. 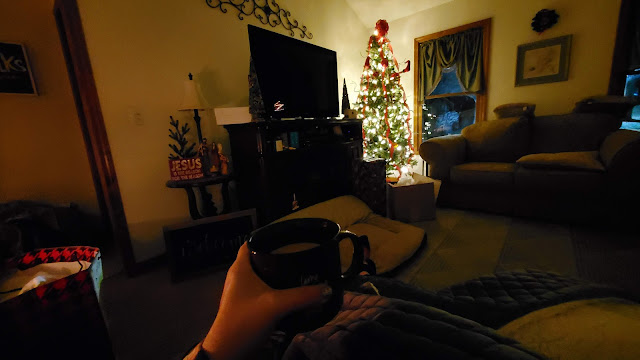 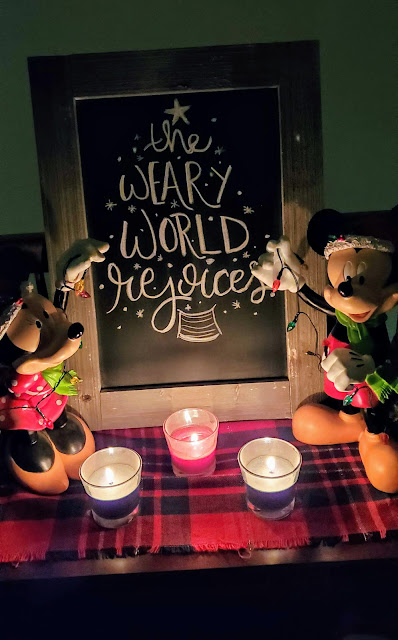 I was surprised when The Hubs woke up super early too & came to join me.  I ended up making some cinnamon rolls & we turned on Mulan & watched it at 6am.  ... I LOVED the movie.  We both did. 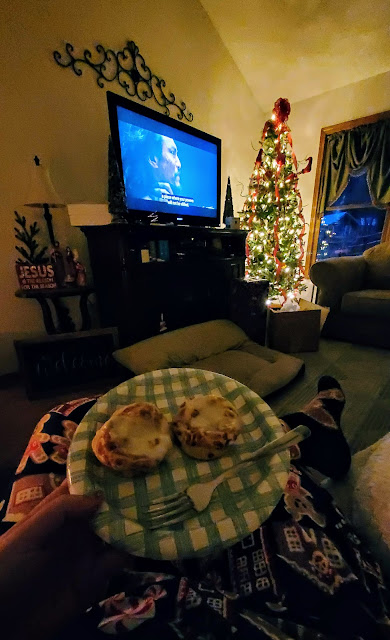 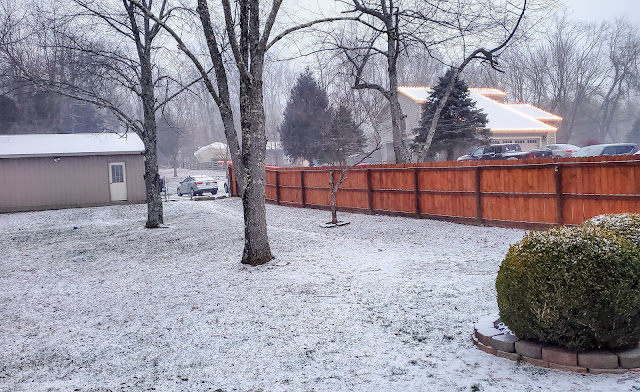 The Hubs & I pulled out our gifts to one another & we just had the best time.  The dog were all about being in the middle of things too... curious little creatures. 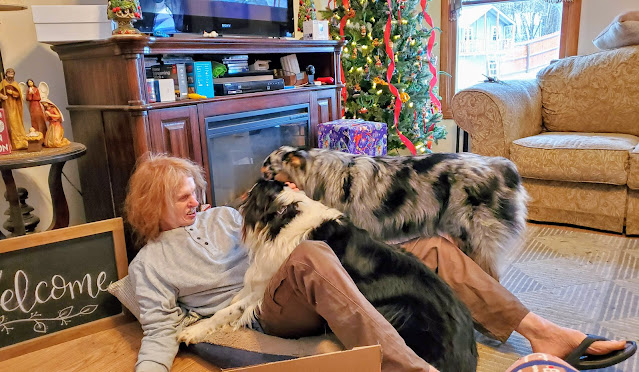 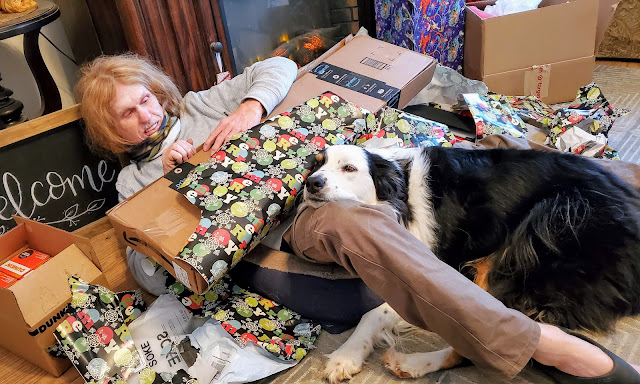 We just enjoyed the slowness of the morning & just had fun opening gifts & little surprises for each other.  It really is the little things that bring such joy! 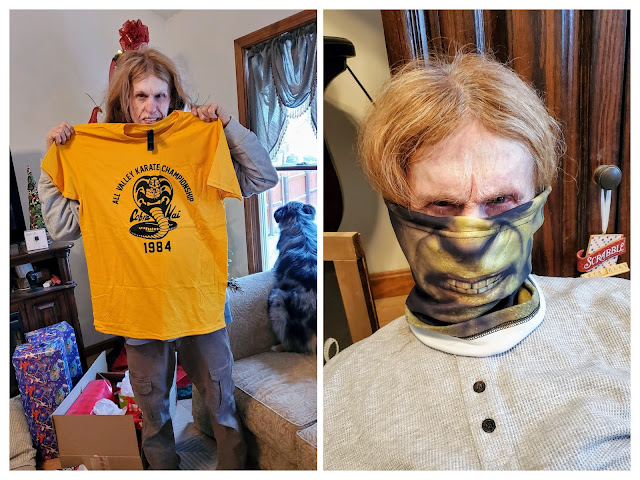 The Hubs said his favorite gift was probably that Cobra Kai shirt - HAHA. See - it is the fun surprises that makes the Holidays.  I'm so glad he loved it.  We both love that corny show.
We were playing with our new toys & got the call that our twin grandkiddos were ready for a visit & we rode over to see them.  Yep, 2 of our girls were in town & staying with their mom & stepdad & everyone was being very cautious with COVID.  We had some talks on how to best handle the situation & with some health issues for various people & of course, the two littles, no one wants to risk anything - so we just agreed to go over & put gifts on the porch for them to open later & then just stay in the yard to visit. 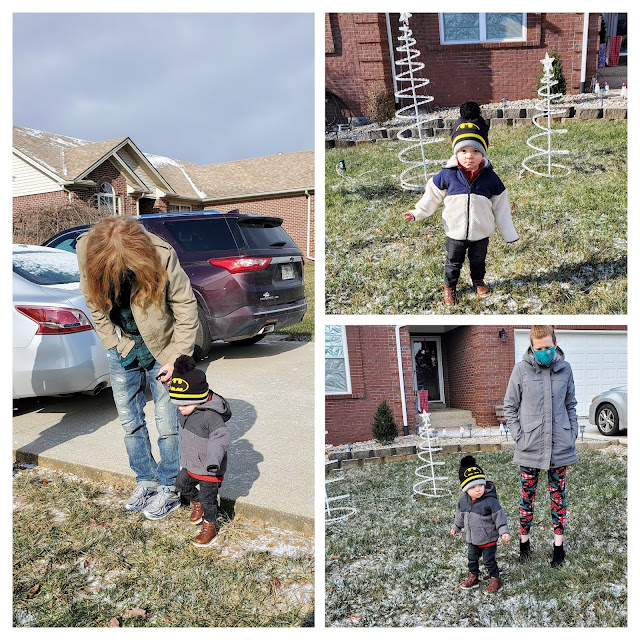 Honestly - its better than nothing, right?  So glad to see everyone. One family came from West Virginia & the other from Minnesota so it was just good to see their faces, even if covered a little bit... & of course, so happy to see those cute little boys. Yes, I wanted to run up & kiss those little faces, but its OK.  I'm just glad to see them at all.  I can't believe they'll be 2 in just a few months.  Where does the time go?
It was 18 degrees so I was proud that we made it outside for about 30 minutes... but we didnt want those little tiny twin noses to freeze off & they apparently dozed right off to naps when we left.  Glad to have gotten a picture of everyone & we all agreed this isnt how we wanted to do Christmas, but its what is needed to keep everyone safe.  & we're hopeful of getting together in the summer when everyone is vaccinated.
The Hubs & I got in the car & thawed out with the heat on full blast & then drove over to Louisville to see my Mother in Law ... & again, we kept a social distance in her home & kept masks on... & we were so excited to see her new Christmas gift - A PUPPY!!!!
It's super fun kissing a puppy with a mask on - lol... that little baby is SO TINYYYYY.  & such a puppy.  Biting my new boots & getting those laces all broke in for me.  This did not help our puppy fever one bit. 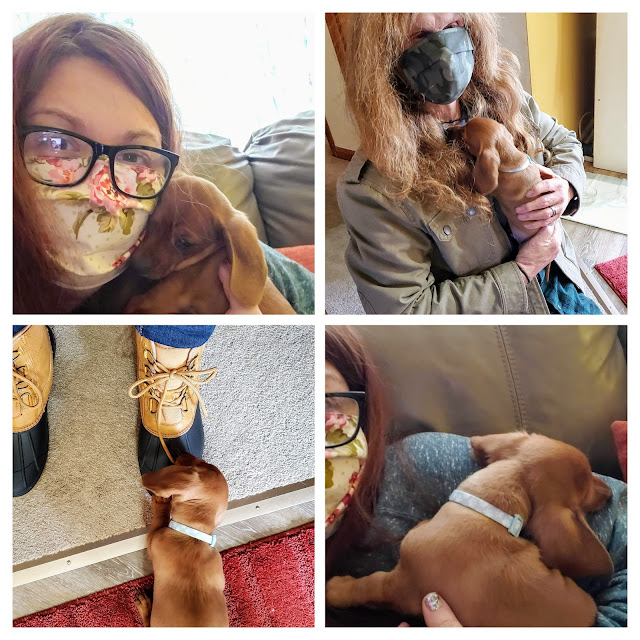 We got home around 3pm & we just stayed in the living room the rest of the evening, staying warm, watching movies & playing games.  The Hubs got me a new chess set because I'm about the Queen's Gambit - & it came with a Chinese Checkers set.  My grandmother played that with me days on end.  I still remember her pattern of getting her men out - & it had me as a MAJOR champion.  She'd be so proud of me. 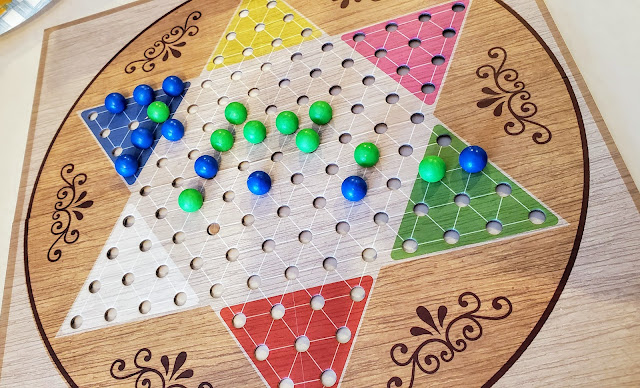 We usually go to the movies & for Chinese/Japanese on a usual/ordinary Christmas Day.  So what did we do this year?  We settled in for the new Wonder Woman movie that came out on HBO Max & I made some Chinese for us at home.  It was really the perfect evening.... all except the movie. Oh my gosh - so bad. SOOOO bad.  I really thought it was one of the worst super hero movies I've ever seen.  Oh well - cant win them all. 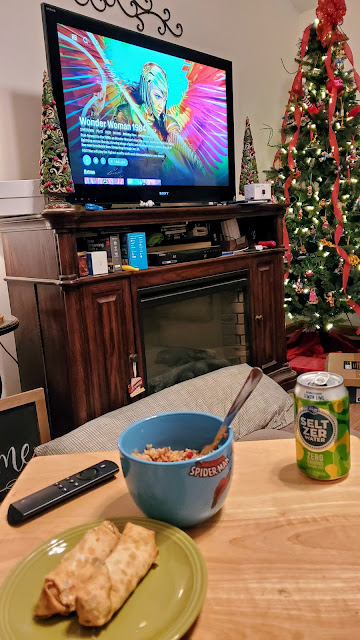 The rest of the weekend?  Just a lot of resting, relaxing, movie watching, reading, nothing exciting at all....
I did end up back at the Little Clinic on Sunday morning because my ears  were in such dire pain, I thought for sure something horrible was happening.   They said that there was even more fluid on them & they were so red & inflamed.  So they gave me some steroids to try & take down the inflammation & upped the nasal spray (UGH! - if you need me, I'll be puking in the bathroom). 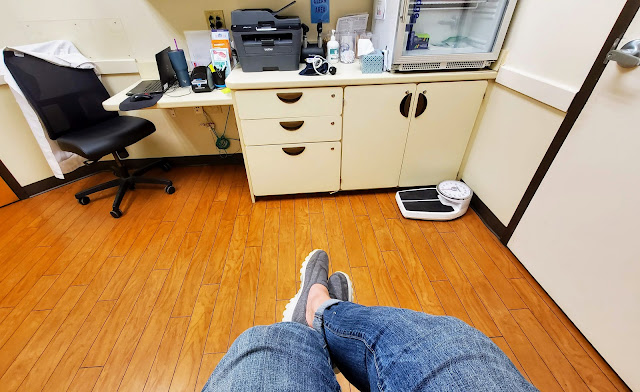 So there we have it... Christmas 2020 - the strangest one in the history of Christmas's... but what a memory we all have & a story we'll talk about years down the road.  How much more will we appreciate future holidays where we can get together & hug & laugh together & play games & eat together? & see everyone's face below their eyes?
We still have 2 more Christmas's to go & I'm not sure how they will work... but one thing I learned - I'm not going to worry about it - if it happens in the yard, or in the summer, its OK.  Because small things dont matter as much as the big things of my family & loved ones being healthy.
How was your Holiday?
Did you have some social distance / masked up gatherings?
Did you watch Wonder Woman?  Tell me your thoughts.
Do you have ear issues?
Whose ready for 2021????