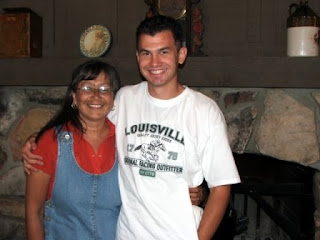 I recently posted a prayer request for Amber & her schooling for her dream of becoming a nurse. Now - I'm going to ask again for prayers for her brother, Ryan. Ryan is in the process of trying to become a fireman - just like his big brother, Rollie. The process is already rolling - he's taken his written test & passed with flying colors. Next up is his physical - which he has been training for with determination like no other. He was talking to us last night about it & he wants to be on top of his game, & of course, right now, he has strep throat! Isn't that the way the devil works? So we're going to pray him out of this sickness & pray that the timing of this physical exam is perfect. He said he doesnt want it to be scheduled too early in the morning because the cold air makes it harder to climb the 10 story building they have to climb. I wouldnt quite understand that part of it - you wouldnt see me climbing that many stairs unless 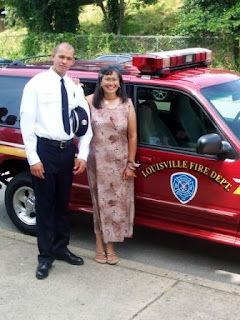 I was absolutely HAD to - & I mean ABSOLUTELY!

We got to watch Rollie go through this process of becoming a firefighter - & that was an amazing thing too - full of answered prayers as he was living in Denver, Colorado at the time it began. Many a trip back & forth from Louisville to Denver during that - but it was so exciting to see him at his graduation ceremony. Hopefully we will get to experience it all over again with Ryan. We just love those kids like our own family so you can bet we'll be cheering them on in all that they do! I just know Steph would be so proud to see the "baby" follow in his big brother's foot steps & to see him head into such a noble career.