I walked into my Jazzercise class today & it was packed to the rim... people everywhere.  I literally had to grab a back corner, by the doorway & was glad I even got that spot.

It didnt bother me one bit though.  Why?  Because when there is a room full of people like that, there is just an energy.  It pumps you up more when there are 25 other people doing the same thing you are doing!  The music seems louder, you can jump a little higher, run a little longer... its hard to even give a reason "why" that happens, but it just does....

And I think about when we take the Jr. High kids to the Believe Conference - WOW!  Talk about energy!  A room full of THOUSANDS of kids.  And kids are full of energy anyways!  But direct that energy towards the SAME idea of worshipping God, & its just a buzz in the air.  Something that is almost contagious!

I mean, look at this picture from last year of all the kids worshipping.  How do you just stand there with your arms crossed?  You dont!  You cant! 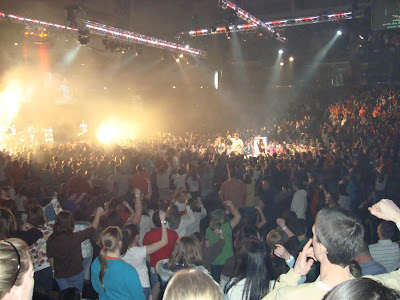 I'm excited because we are gearing up to go back to this convention next week with the Jr. High youth... I'm looking forward to that crowd & that energy to pump up my soul.

Driving home from working out, I thought, wouldnt it be a fantastic & amazing world if there were energy like that everywhere you went.  Just like that aerobic class, where everyone had a similar goal... & granted, people did it differently.  There are women who are like super model beautiful who do high impact the whole time & dont break a sweat... or women who are more "mature" & do things maybe a little lower... but they all are there to work out - to get their body in shape & doing similar things to achieve that goal....

I just think how hard it is for the youth of today to get ENERGIZED for God....I know especially when they are in areas of their lives where they are NOT surrounded by Christians, its hard for them to be the one to stand up & be bold. Adults too really...

But just like at Jazzercise, when everyone else lets out a big scream, its easy to do it, but when its a small class, I'm usually the only one who'll let out a big WHOO HOOO during a move (Yeah, I'm THAT person).... When not everyone in a small youth group sings loud, its hard to belt out a song... but put that same kid in that arena with 1,000 others & see how loud that voice can carry!!!

Then I thought of something else as I was driving... Jesus spent a lot of time in crowds as well.  But every time he wanted to talk to his Father, he did it alone - away from the crowds.

So I guess God gives us that energy to sustain us until our time alone with him... And that's where it really matters... that one on one time... that time where you do get away from the crowds - the good crowds AND the bad crowds & its just you & your Father & you get to listen to what He speaks to your heart & to your soul... & that's the best feeling you could ever get....

For where two or three come together in my name, there am I with them. -Matthew 18:20