*****
Yep... finally, after delays & problems with the plane, Julie & the boys arrived.   And that little turkey Isaac... Ricky & I see them coming around the corner.  It was pretty crowded so we couldnt be up near the "DO NOT CROSS or we'll tackle you & body scan you" line... we were standing back a bit.  But Ricky was holding this massive Iron Man balloon.  Isaac saw us through the crowd & his face was priceless.  It just lit up & he took off running... I lean down because I know he wants to run into his Nanny's arms... this is going to be a teary Kodak moment.  But then, ZOOMMMMMMM - right pass me he goes.  Right into Pappy's arms.  "PAAAPPPPYYYYYYYY" was all I heard.  Next time I'm going to be the one holding the balloon.... 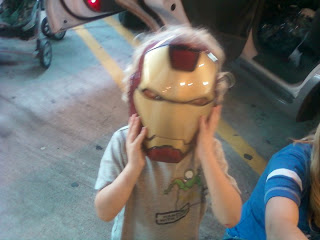 *****
That's ok though... we now have TWO grandbabies now so I can love on Lucas.  He's too young to push me away :)  He did want his mommy to hold him, but when you hold them & run away from their parent, they have no choice but to let you hold them... I'll all about forceful love.


*****
Ricky locked his keys in the car at the airport... (no, that's not a cue for spat of the week) ... but it was so funny - the AAA guy came to get the keys out & noticed Isaac in his Ironman mask.  He said, "Who are you?" - Isaac looked up at him & said "Tony Stark" ... for those of you who dont know - Tony Stark is the character that is actually IronMan... I think Ricky was boasting his chest in pride at his little grandson.

*****
It is 4 week till the Kentucky Derby Mini Marathon... the excitement is building.  I know I need to get new shoes before then.  I did 11 miles on Saturday & I felt fantastic - except for my feet!!!!  They felt like they had blisters all over them by the end.  They didnt - but they felt like it.  And my arches were just sore.  I think I'm going to go get fitted for some running shoes this time around.  Any favorite kind of running shoes anyone recommends?
***** 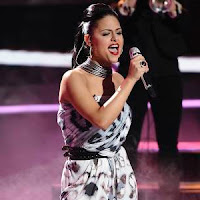 Everyone was so surprised Pia was voted off American Idol?  I was, but wasnt.  I think she was awesome on the song she sang.. but there is something about her.  She just didnt have the personality the other contestants have.  And I've seen around blog-land that a lot of you felt that way about her.  I truly do believe she has the best voice of ANY American Idol contestant.  But if you dont have that personality that stands out - you dont have a chance....


*****
SPAT OF THE WEEK:  WEDDING RINGS .... We went out to lunch after church on Sunday with our buddy, Carly Sue (hi Carly... waving!!!) ... & I looked down at Ricky's hand & what the heck is on his hand?  Its not his wedding band.  So I ask him, "Wheres your wedding band?" - He was like, "duh - right here on my finger?" ... um - no!  That wasnt the ring I bought him.  Well he got another ring that he likes & he will wear that one sometimes - alternating the rings.  I told him that isnt REALLY his wedding band.  He said if he wears it on that finger, then it is... but I didnt buy it for him... I get that if someone sees a band on that finger, they would assume he's married... but its not the one I gave to him.  Oh, ask Carly, this conversation went back & forth for about 10 minutes with me saying the same thing & he saying the same thing.  "But its not your wedding ring".... "But its a band on my wedding ring finger".... geez... how boring our lives would be without these spats... 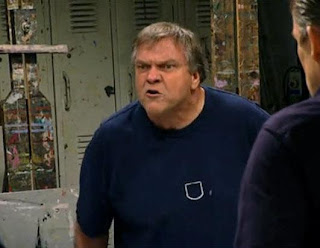 Speaking of Donald Trump - anyone catch the EXPLOSION that was Meatloaf last week?  Wowwwwww... That is what you call a "temper"!!!!  Over missing paints?  You totally know he felt so dumb when they found that paint in the corner... ooopppsie!!!
I did have to laugh when Marlee calls Gary Busey a "genuis" .... really?  REALLY? ... wouldnt it be funny if he made it to the finals?
*****
Between John Rich on Celebrity Apprentice & George W. Bush... I mean Afred E Newman... I mean, Scotty on American Idol, I'm starting to get a "hankering" for country music... who knew!!! YEEE HAW!!