Too much FOG & a FALL? What a crazy story-telling night!

I just saw on Facebook a bunch of people talking about some big basketball game on tonight?  I havent seen one game all year, not going to start now.  I'd only watch it if the players had on some swinging fringe or rhinestones... now THAT would be a fun ball game! As it is, I'm sticking to my hunky men of Dancing with the Stars... & we're LIIIIVEEEEE!!!!

8:00 - "Tonight we challenge the dancers to pick songs important to their lives... their dances will tell a personal story... love, loss, and triumph..." -Tom

8:07 - "I want to bring how I got started in media, which was in radio" - Wendy "When I was working... I wouldnt even stop at my parents house when I was tired.  I slept in rest stops so I didnt have to explain my radio dream...that was the time who I learned who I was as a person"

8:12 - "... We usually start with Len, but we want to congratulate the woman who got engaged on national television..." -Tom to Carrie Ann who is flaunting the ring.  "You should be in your happy place" 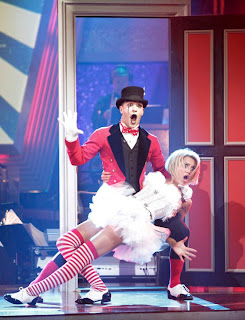 8:31 - "I just finished wrestling training & got a call that said you need to come home right now... my mom was in an accident.  She was so scared. I saw it in her eyes... I thought I'd give up & not wrestle anymore.  She said no, you're not going to give up your life for this... she slowly deteriated & passed away in 2005... the one thing she was into was dancing" -Chris "This is very much a heart felt piece"

8:45 - FOG ALERT!!!!! the fog was so thick you couldnt even see Kendra on stage...& then she's wobbling down the stairs like she's lost on where she's at... that was almost funny!

8:46 - "There is NOTHING wrong with a good stripper... it was arousing... & if it had that effect on me, can you imagine how it effected the men in the audience?" -Bruno

8:54 - "I want to tell a story that is emotional.  I'm picking the song 'I'l Be There' because at the age of 9, I lost my cousin to a car accident.  I saw it with my own eyes....my other cousin died after getting jumped" -Romeo

8:55 - "Something is really bothering Romeo & its not the shoes" -Chelsey

8:56 - "I'm doing this for my cousins... they're probably looking down laughing at me wearing these leprauchan shoes" -Romeo

9:03 - "I picked the song "Fantasty" by Earth, Wind & Fire because my mom listened to this song a lot.  Unfortunately, my mom & dad divorced.  My mom saved every penny so she could gain custody of her only child.  She was more proud of me going to college then me being in the NFL" -Hines 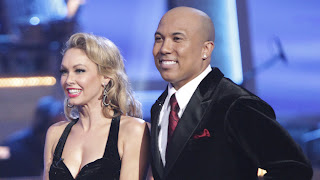 9:17 - "I would love to dance to the song "You Raise me Up" ... this song gave me courage to start "Happy Hearts Fund" that starts schools after natural disasters" - Petra

9:20 - "You were like a vision from Heaven & you looked like an angel" - Bruno "Your beauty is great, but your heart is even more beautiful"

9:28 - "When I hear the song "My Prerogative" its going to take me back to the days when I was fighting" -Sugar Ray

9:39 - "Let me introduced you to the actress who is embarassed to act" -Maks
"I dont like acting sexy in front of people... unless I have a beer" - Kristie

9:44 - "I think tragedy leads to amazingly beautiful moments... despite the mess up, something magical happened after that" - Carrie Ann "You were connected to your vulnerability & your strength to over come it"
"You cant keep good talent down... when you got up, it was better then ever!!!"- Bruno

9:49 - "I always loved that song ("Stay Gold" from "The Outsiders"). It means to strive, to hold those moments in your life that are most special.  We used that as our wedding song.  This week is my wedding anniversary.  Phylis & I feel like we're soul mates.  Life has meant for us to be together" - Ralph

What did you think?  Too hard on Ralph again?  Feeling bad for Kristie?  Impressed how well she handled it?  Confused if Chelsea is still with the guy who wrote the song for her?  Because I see her & Mark together... I'm telling you - LOVE CONNECTION!   What did you think of all the stories of people dying done to the RHUMBA?  The dance of love?  A little odd... I definitely think Hines is the champion of the night... who was your pick of the day?  ...  dont tell me you were watching basketball instead...