April 17 - Sunday - Time to say goodbye.... we took Julie & the boys to the airport.  Here they are waiting in the airport... Isaac with his new toy... & see Luke back there on Ricky? He was sicker then a dog.. he had a fever & just wanted to be held & wanted to sleep.  I felt so bad for him!  Then it was time to go & Mr. Isaac did NOT want to go.  It was awful... horrible... words dont even explain.  Ricky had to get a security pass to be able to help Julie get both boys to the gate.  I wasnt even sure they were going to let him on the plan because he just kept screaming.  Oh my... this was just a bad day... 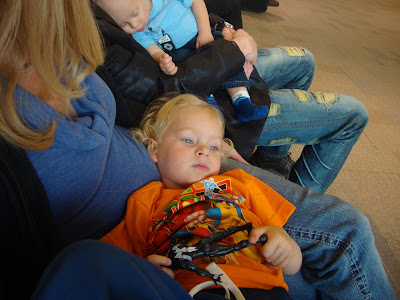 April 18 - Monday - Tax Day .... Back to work & back to routine... & this was tax day.  I work in accounting, so it was a day full of cutting checks, writing envelopes, getting paperwork together... Whew...Busy day back! 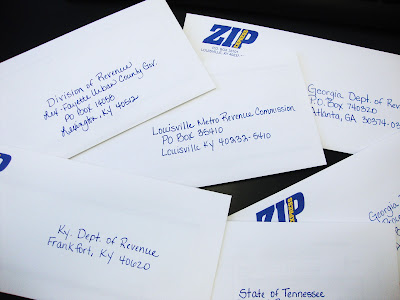 April 19 - Tuesday - Its BLOOMIN' - after 16 months!!!! .... a co-worker got this plant for me LAST Christmas - yes, Christmas 2009.  It grew leaves but never bloomed.  All the leaves died off & I repotted it & more leaves came out immediately & this time, I got BLOOMS!  And this plant is amazing.  Like literally, at the beginning of last week, the stalk with the flowers wasnt even there.  Its like you can sit & watch it grow... so when I walked in & saw these huge blooms open, I was shocked.  It was a nice way to start a morning... 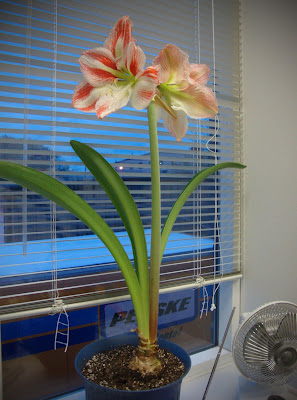 April 20 & April 21 - Wednesday & Thursday - UGGHHHH!!!!!! .... I could feel something coming on actually Sunday.  But it was staying off... until Tuesday night... & then it kicked in full force on Wednesday & Thursday.  My ears were killing me.  And I was told when my ears hurt, sinus medicine helps.  But my throat was like razor blades were just laying along the lining of my throat, so I downed BAGS of halls drops.... I'm not a good sick person. 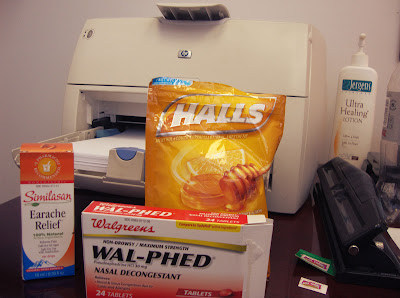 April 22 - Friday - No Picture.... I had to take my dad to the hospital & it was too early to even think of a camera.  We got him home & I ended up napping... Headed to church for Good Friday service & was so caught up in the service to think about snapping a picture... it was a busy, tiring, hectic day... & no camera... I'm a failure...

April 23 - Saturday - Where's Noah? .... My goodness - we have been hit with some MASSIVE storms.  I'm talking about storms this week that had us sleeping in the basement a few times during the week.  And now, the results of all the storms - FLOODS.  Our roads are hilly & the water is ponding BADLY.  I ran out to get new running shoes & this was just one SMALL area of our road.  (The only safe place for me to stop & take a picture actually) .... most of the road looked like a LAKE... I've never seen it this bad around here before in my life... I kept waiting to see animals meet up 2x2... 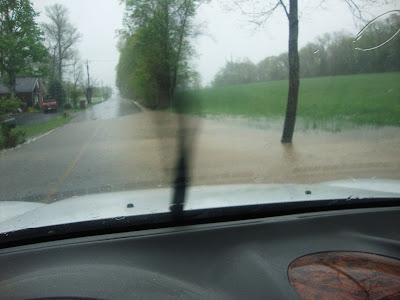 Hope everyone has had a wonderful Easter Weekend!!!

I do plan on posting more pictures of the boys this week... so be prepared :)