* My goodness - it was a warm beautiful day... I ended up coming home from work & sitting outside with my Kindle while the sun was setting.  Made me long for Spring more then you know 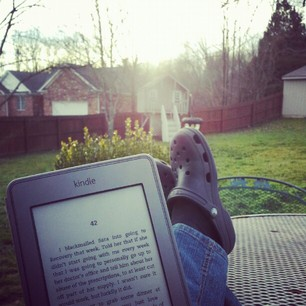 * Started a new project with some Noro yarn I had.  I started 3 different projects & pulled them all out until I just decided to do a hat.  Then by the time I got it finally good & going, I was tired & said, forget it, I'm going to bed.

* I love the look of Noro - but it feels like YUCK... they better be glad they have beautiful colors that work up. ( & yes, I know they have a silk Noro that is softer... this aint it) 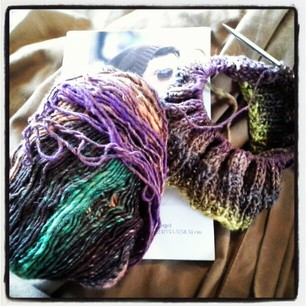 * Headed to see the Princess Diana exhibit.  Nothing like waiting till the last minute.  Sunday was the last day.  The line to see this exhibit was HUGE.  But the workers said it had consistently been that busy. 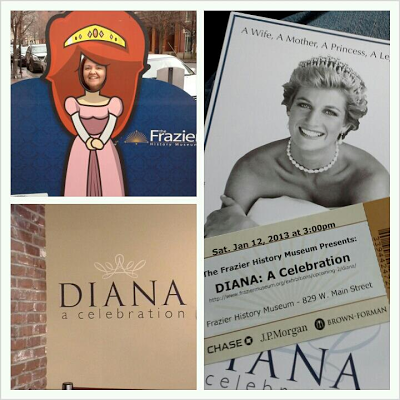 My favorite part?  There was a prayer book from Mother Teresa & it was opened to show Mother Teresa's writing about how Jesus is so good & Jesus is love... it gave me chills

* My sweet hubby endured with me.  He kept saying, "Am I the only man in here?" ... for the record, we found 2 others... that looked equally as bored with their wives.  But to make up for it, when we were done, we ventured around so Ricky could see guns, knives & exhibits on cowboys & Indians   I will say, I enjoyed that myself. 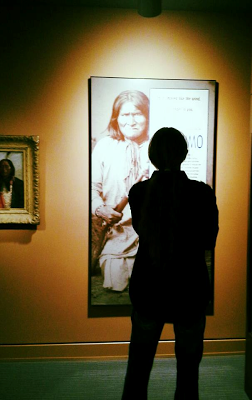 * I actually bought 2 Christmas presents for 2013... no joke... now, let's hope I dont forget that I bought them come December!

* Came home & Ricky got our Blue Ray player hooked up in the bedroom .... we had a movie night.  Hunger Games!  Yes, I had seen it before & when I saw it in the theater, I had dreams about actually being IN the Hunger games.... yep, after watching it again - I had dreams again of it.  SCARY!!!!!

* Ricky was saying he wanted some meat or protein for lunch - that he was feeling weak with all the vegan cooking for the week... so we headed to a place that he normally gets a burger at.  I ordered their veggie burger - which is AMAZING .... guess what Ricky got?  A veggie burger! haha!  Guess I'm really rubbing off on him.

* It was rainy & the temperature dropped... I just wanted to go home & put on sweats & lounge.  Ricky & I both nodded off for an afternoon nap.

* GOLDEN GLOBES!!!!
- Les Miserables!!! HUGH JACKMAN!!!  Anne Hathaway!!! All winners!!! I was one happy girl.
- Amy Poehler & Tina Fey were fantastic!  They need to host every year... & they need more screen time!
- Will Ferrell has to be the funniest person alive
- Louisville girl Jennifer Lawrence won!  Was happy for her - but didnt care for her first line of "I beat Meryl"
- Jodie Foster's speech was both moving & bizarre.  It was like she was talking out of her mind one second & then being profound the next.  & then flash shots of Mel Gibson & it made it all even more bizarre.
- The trend of the night?  Women's chest's showing.  Katherine McPhee, Amy Poehler, Kate Hudson, even the chic that won Best Lead Drama... all had dresses cut down to their belly.
- The lady that won Best Lead Comedy - she obviously wasnt comfortable in heels.  My advice, go for flats, or barefoot.  Who cares - you're the winner.  Strut on that stage in comfort!
- Wonder if it was awkward with J-Lo & Ben Affleck with his wife in the same room?
- Bill Clinton - that was a surprise - or as Amy Poehler said, "Hillary Clinton's husband!"
- Josh Brolin freaks me out... he has morphed into his father... how did that happen?  I still see the Goonie's guy, but turned into another person.
- I cant see Kevin Costner speaking now without thinking about Whitney Houston
- Lucy Lu gets my nomination for worse dress... that HUGE dress was too much for her little boy
- My favorite?  Probably J-Lo... she's the only one who can pull off a nude dress like she can... 2nd - Anne Hathaway just because she's class to the extreme

Now, let's get into this week & see where it takes us!

Email ThisBlogThis!Share to TwitterShare to FacebookShare to Pinterest
Labels: Picutres 2013