So I have to give major props for my hubby for Valentine's Day.

I've been with him for 20 years & I'll just say, I'm very aware of things
so he's never really surprised me before.
Yesterday - he surprised me.

I came home from work & I'm the first one home.
I walked in & noticed the house alarm was off.
I freaked out.
I stood in the middle of the kitchen thinking, "I KNOW I turned it on when I left"
....then I noticed music playing in the background...
& then noticed tennis shoes on the kitchen table
WHAT?

Then Ricky popped around the corner yelling "Happy Valentine's Day"
....making me almost pee on myself!!!!!!.....

Then I see this spread 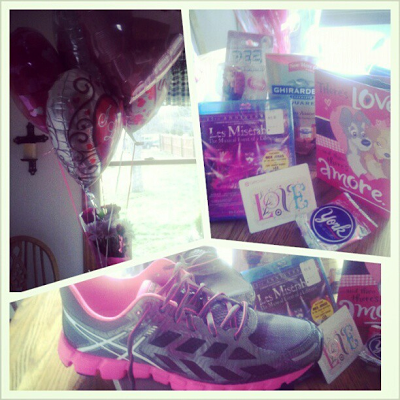 Funny how I didn't see the massive amount of balloons - only running shoes! haha!!!

Yes - he just bought me some for my birthday, but these are lighter ones for different workouts
... & he got me candy (Got me the Brave girl in a Pez because he said he thought it looked like me), chocolate, a Target gift card, a song Disney card & the 25th Anniversary Les Miz Blue-Ray
(does he know what he just caused in our house?  24 hours of it playing on our TV)
.....I told him it wasn't about all the presents he got me - it was the time & thought he took to put into the day for me....
I was flabbergasted

To top it off - he went on a 5k run with me
Now that's a pretty awesome husband - I gotta say!

OK - from Love to Disaster

Anyone else a tad freaked out about this Asteroid coming close to earth today?
It freaks me out...

Remember, I'm the one who when they broke on TV with the President last year with news about Bin Laden was killed -I was sure they were going to say there was an Asteroid coming towards the earth,
aka Armaggedon.

& then I turn on the TV this morning & see a meteoroid hit Russia?
HELLO!!! See the video of it?
Just like the movie

If we don't make it, know I called it here first
....thought it wont make a difference because we wont be here...
Find me in Heaven & give me a shout out that I called it - OK?

You can tell we're in Kentuckiana - or Horse Country
when on the local news station, for the past 2 days, they are reporting on a horse's health
Even talked with the jockey this morning about how the horse was doing

We take our horses seriously in Kentucky

I dont know if its because my brain is too influenced with tv/movies
but anyone else think that crazy cop in California isnt really dead?

He has repeatedly said he knows how the cops work...
he's obviously not afraid to kill anyone....
so how do we know its his body that they found in that cabin?

Its been a nose bleed kinda week for me.

.... just randomly, I'll get nose bleeds for a few days...
& when I say nose bleeds - I'm not talking about a little inconvenience

I'm talking about my bathroom counter, or my clothes looking like a horror movie- slasher film

My Friday Fragments have taken a turn for the worse
... now we're talking about blood...
we'll just move on

If you haven't seen this yet, you really should watch it

When I first saw it, I got all teary eyed & choked up
Its funny because I thought about it running last night & thought why did I get so emotional?
After all, when my family gets together & runs in a field, it doesn't make me cry
...because we do that often...

See - the power of music
Put a song like "We're not going to take it" by Twisted Sister behind this
... I bet it would totally change the emotion...

Scandal:  I want Olivia Pope's wardrobe.  I actually did buy long gloves like she wears.  Except mine aren't leather, but more like cheap fleece.  Nailed it :)

American Idol:  I gave up completely   After seeing the joke of guys they put through, I didn't even care about the girls. I may watch when it goes live... probably not

Dance Moms:  I love how Abby & Kathy can get random kids that already know how to dance & they put them in a competition & they're like "That's from MY company"... how does that make sense?

The Bachelor:  Thank you Jesus that Sean has a sister that knocked sense back into her brother about girls that don't get along with other girls.  Tierra is OUTTA there... & did you see?  She's already engaged to someone.  Good luck to that man.

Glee:  Are you kidding me?  Mr. Shue & Miss Pillsbury STILL didn't get married?  Stupid.  Probably more stupid then me still watching Glee.  But Sue showing up in the same wedding dress did make me laugh.

The Carrie Diaries:  gave up on it.... sorry young Carrie Bradshaw

The Taste:  Why does everything have to be internal organs of animals?  I want to barf

Laugh of the Day: