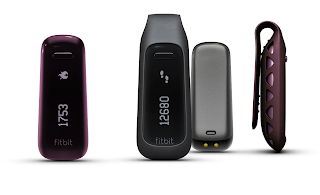 Believe me, I'm not getting reimbursed or given anything for this.
I bought one totally on my own & this is just how much I love this little gadget.

The relationship started when I saw my friend, Carolina Girl talking about it
Well, we're like twins - except we look nothing alike :) - but we would be BFF's if we lived closer to each other & I trust everything she says.  She was the one who started talking about this little gadget.

You talk about fitness gadget's & my ears are all perked up.

I found out another friend of mine had one, until her daughter had lost it in the land of child hood play-land - but she loved it too when she had it.  Another trusted opinion.

Got it & charged that baby up... & instantly fell in love.

So what's so great about it?

First, I like that you can wear it easily.  The case it has straps onto anything.  If you dont have pockets, ladies, you can even strap it to your bra.  The case is tight too where it doesnt feel like its going to fall off of your pants.  I've wore it running & it never even jiggled.

I also love that it's pretty accurate.  My pedometer I was wearing before was never that accurate.  I would run a half marathon & at the end of the day, my pedometer said I went 10 miles.  Obviously wrong.

I LOVE the web site.  The FitBit links up wirelessly to the web site & contains all your information.  How many steps you have taken, how many floors you've climbed (the hills I run count as floors, I love that) - you even can have friend & compete to see who gets the most steps.  If you're competitive, you'll love that.  You also earn 'badges' that lets you know of your accomplishments.  I strive every day to try & get a 10,000 step badge.... its the little things in a day.

You can sync your FitBit if you have an iPhone & use the app, but my red-headed-step-child Android doesnt do it.  So I actually bought another sync unit (its like $9.99) & put it on my work computer so my FitBit links up at work & I leave my other one on my computer at home.  I'm always around either one of these computers, so it works out fine.

I also love that it syncs up with My Fitness Pal... so I enter all my food there & see my calories, but my FitBit also takes in consideration the calories I'm burning moving around.  LOVE THAT! You can also enter your food on the FitBit site as well if you're not on My Fitness Pal.

Something I've also never seen before - it tracks your sleep & even gives you calories burned throughout the night.  (YES - extra calories!) But it will show you when you wake up & when you're moving.  You put it on your wrist & I guess the movement of your hands lets it know when you are awake & moving.  I don't think its 100% accurate - but its pretty good.

It has an alarm on it as well that vibrates on your wrist so it doesn't wake anyone else up. I've yet to try that.  I've got enough stuff waking me up :)


I don't know if you're into fitness gadgets, but I think this is something everyone should have.

If you have one, let me know what you think...

If you have any questions, just ask - I'll be more then happy to answer

Now I've got to go walk around my office to get in a few more steps for the day :)