Its been over a year now with some changes in my life...

I gave up Diet Coke last March ... still can't believe I did it... & now, when I see anyone drinking soft drinks, I cringe.  I hate I drank so much for so many years knowing what it does to your body.  But at least I stopped.

The other thing, I gave up meat last February. 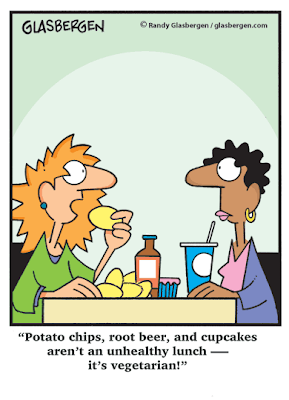 I've been very happy I made those choices.  I'm just someone who always wasn't a big 'meat' person anyways.

& its not really that hard to do.

Some restaurants make it harder then others, but what I've found is there are plenty of sides on any given menu to fill you up.

I'll also say that my skin has changed.  I used to fight so badly adult acne.  Seriously - it was worse as an adult then when I was a teenager.  But I notice now that my skin doesn't break out anywhere near the way it used to.

& I know giving up meat is a lot for people - but I found this article in a vet's office & loved it.
It was about healthy eating & the effects of just cutting meat a little out of the American diet.  The difference it can make. 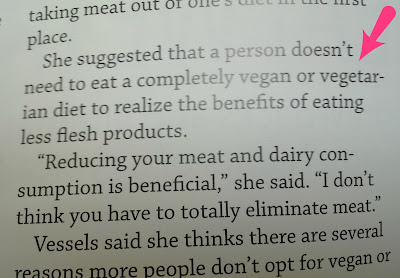 I keep hearing of more people doing "Meatless Monday's" ... & maybe stretch it to 2 or 3 days a week.  It significantly makes a difference. 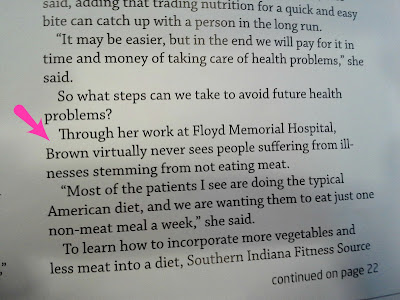 & I will say, I have had some struggles with how my body feels... I think its mainly because I've always had blood issues... anemia.  My blood has always been low.  They don't know why - I've even had to go to a hematologist & they couldn't find out anything unless I wanted even more extensive testing & research.

Hey - I'm OK with feeling run down & tired - done it my whole life - as long as it's not something obvious - I don't need to be poked & prodded to find out more answers...

But I have felt the effects in my training for the half marathon.  I really feel like that's been the downfall of my time this year.

I can tell I'm Vitamin B12 deficient ... I could feel my anemia coming back & researched what a B12 deficiency looked like.  They might as well put my picture up there.  Complete with the white spots on my skin from the lack of vitamin boosting the melanin. & come to find out, you get B12 mainly from animal products.  Great.....

The best way for a vegetarian to get B12 is through dairy & eggs.  I don't drink milk.  I only drink soy or almond milk which holds no B vitamins.  I'm not a big dairy person truthfully.  I like cheese, but don't eat it but probably once or twice a week.  I do eat eggs - but usually just on the weekend. ... so there goes my B12

So recently, I'm dipping my finger back into a new way of eating

It incorporating seafood.  Which is great for Omega 3 & good for the heart, if you eat the right seafood.

I think my body is screaming for something... so I'm going to see how it reacts to eating just a little bit of seafood.  Maybe one meal a week.

(Forgot to mention:  Since I had my neuropathy issues before, I can't take Vitamin B supplements... my body just doesn't react well with supplements... that's what they think caused my nerve damage last year...so that's the reason for wanting to eat my vitamins instead of taking a pill... )

I promise you though, I'll never eat anything that walks the earth... no chicken, no cow, no cute little piggy, no turkey - nothing that breaths air .... I can't make myself do it.  It nauseates me to even think about it.

So we'll see where this next year takes me... if seafood helps my body... trying to incorporate even MORE veggies.   Its about doing what's good for a body - right?

Are you willing to give up some meat?

What changes have you made in your diet to feel better?

Are you a milk drinker?