Since all the graduations have happened the past few weeks, I found this little question survey on your graduation year....

This should be good for a laugh!


1. Did you know your spouse?
Nope... we had run into each other though when I was a cashier at the grocery store & he'd come in.


2. Did you car pool to school?
Yep... my school wasn't near my house. I went to a Traditional School which that was the only school in the area with that program... so it was a long drive. But me & some friends from school would take turns driving since it was such a long haul.

3. What kind of car did you did have?
A Toyota Celica. I think it was a 78... or 79?  It was a 70 something. I just loved it. It was a mess.  It was passed down from my friend's sister, who passed it down to my friend, whom we got it from. The paint was all messed up on it, the seats were a mess, the steering wheel had leather chipping from it, dont think the air worked... but it was still magical to me. First cars usually are.

5. It's Friday night...where were you?
Usually with my friend Stephanie.  We were usually cruising up & down Dixie Highway, with the main stops being Rally's at one end of the highway & Taco Bell at the other end. We'd just cruise from one location to the next... always until we'd all get run off.  It was so fun.  & then we'd usually be at one another's house watching MTV & catching up on all the latest videos. 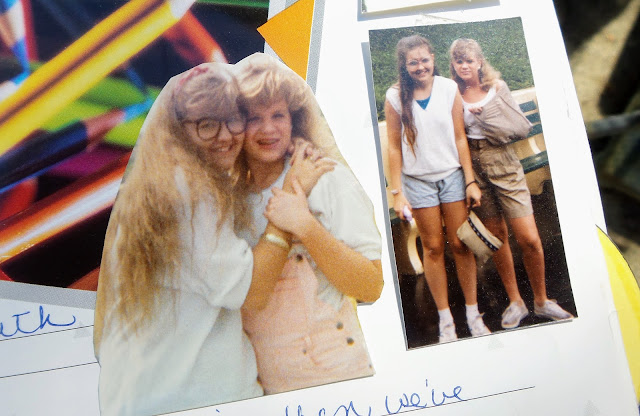 6. What kind of job did you have in high school?
A cashier at our local grocery store, Winn-Dixie.  I loved that job actually. As a little kid, I thought working a cashier was the coolest job ever, so when I got to do it as a teenager, it was pretty neat.  & when I started, it was JUST when they put in the scanners. Like, the first week I started, I remember hand entering prices in the register & then these CRAZY CONTRAPTIONS came that you could scan a bar code.  But you know technology - it's never great at the beginning, so it was still a lot of hand entering numbers.

7. What kind of job do you have now?
I do books for 3 companies... & photography on the side... & also serve in Youth Ministry.
All over the board.

8. Were you a party animal?
Oh heck no.  Now, Steph & I loved going to parties for the social side of it, but 'party animals'? We were known in the area for the ones who didn't drink or do anything bad.  I'm glad to be known as that kind of girl.

9. Were you a cheerleader?
Excuse me while I wipe my tears away from laughing at that question.

11. Were you in band, orchestra, or choir?
Nope... I hardly did much in school for outside activities.  With my school being so far away, it wasn't ever easy for my parents to come get me when I couldnt drive, so I didnt stay after school for anything. & when I could drive, I had a job to keep my car & gas in it so I just never joined anything in school.  That good ole 95 cents a gallon gas added up when you had to drive forever to get to your high school.

13. Did you get suspended or expelled?
I'd die if that happened.  Again, read my answer on "party animal"... I'd freak out if I did something to even warrant a suspension of being expelled.

14. Can you sing the fight song?
No way.... I never could. But I do actually know the first line of it now for some reason... how? I have no idea. I think it may be written in our year book or something.  I wasn't a 'school spirit' kinda person....."Let's give a RAH for dear old high school......"  That may not even be right. I may have dreamed it.

15. Who was/were your favorite high school teacher?
Mr. Walsh.  I think he taught History.  Funny that I dont remember that.
His son was in our class - & his birthday & mine were the same... funny the things you can remember... but I saw somewhere that Mr. Walsh died awhile back. It made me sad.  He was always a nice man to everyone.

16. Where did you sit for lunch?
At a table.
(not sure what this is getting at... do people eat at different places in school?)

17. What was your school's full name?
Louisville Male Traditional High School.
& they were BIG on you saying the WHOLE NAME.  But we all just called it Male. 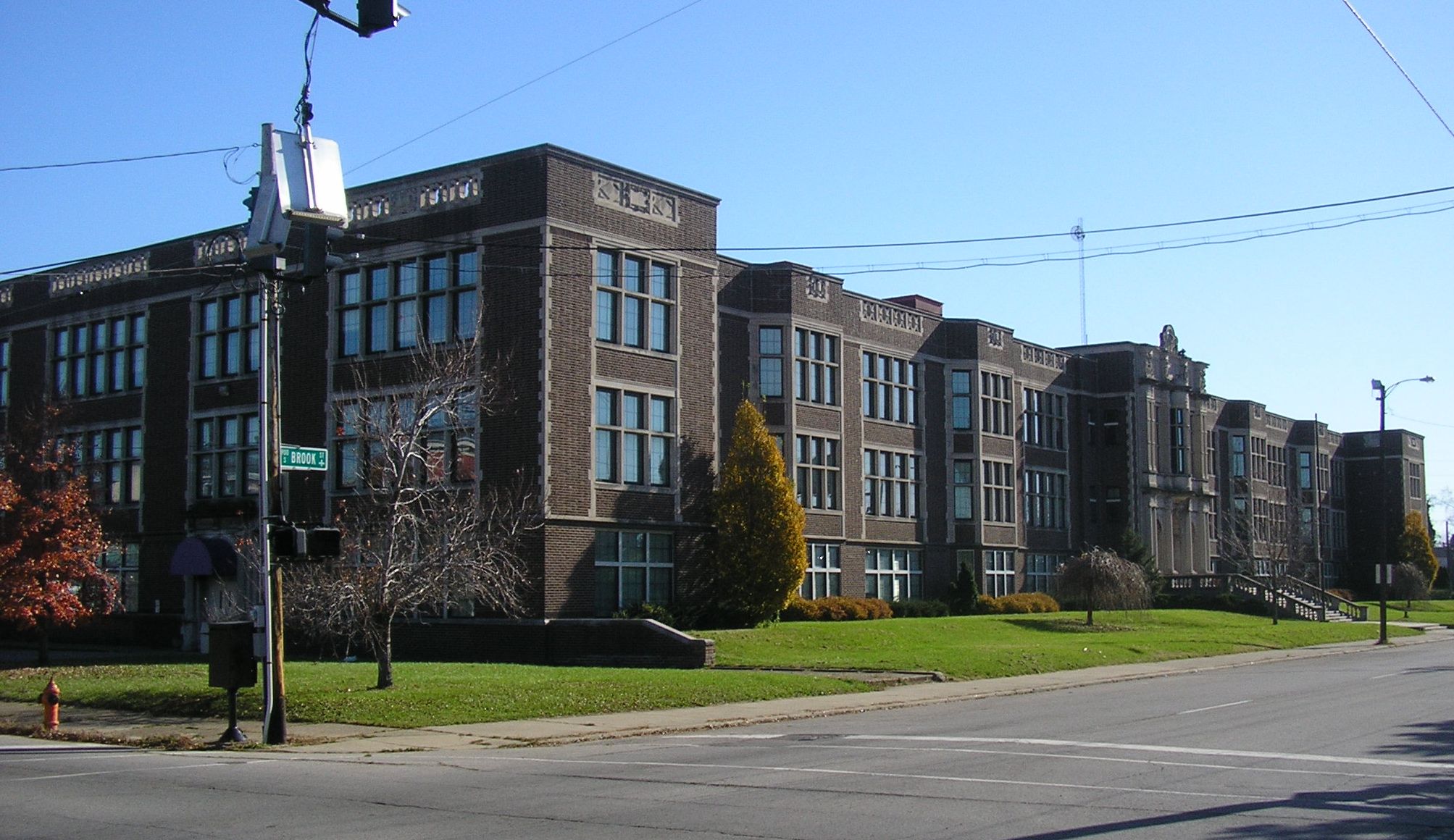 That right there is my school...
Even though now, Louisville Male Traditional is at another building today.
My class, 1990 was the 2nd to the last graduation class from this building.

18. What was your school mascot?
Bulldogs!!!

19. If you could go back and do it again, would you?
Yeah... probably... again, a nerd? I liked school.
& maybe I would be more involved...
It's always interesting to think about going back & redoing some things.  I love me a good 'do it all over again' kinda movie.  I'm looking at you Peggy Sue Got Married

20. Did you have fun at Prom?
Meh... It was alright.... it had its moments. But it's never like you imagine it'll be.
I do remember though that I had the same dress as 2 other girls. I thought it was hilarious. I think we even all took our picture together.

21. Do you still talk to the person you went to Prom with?
Nope.  We didnt even talk much after prom.
I just went with this particular guy because he was a dancer.  I LOVE TO DANCE & I wanted to be on the dance floor for my prom. I didnt want some guy who was 'too cool' to dance, or some guy who COULDNT dance & tried (YIKES!)  so I made sure I had an awesome dance partner for the night.  & we did dance. That was fun.

23. Are you still in contact with people from school?
If you call social media 'contact with people' - then yeah.
It's funny because I had a lot of people I was friendly with in school - I got along with mostly everyone, but I just never had those CLOSE friends that you grow old with & still meet up for lunch with & talk the good ole days with.  I basically had my bestie Stephanie, & she didn't even go to my school for the last 2 years of high school... so everything I did outside of school itself, was done far away from my school & not with anyone that went to my school.  It was a unique situation, to say the least.  I always said I needed to go to the high school's around my home - their reunions. I'd probably know more people at those. 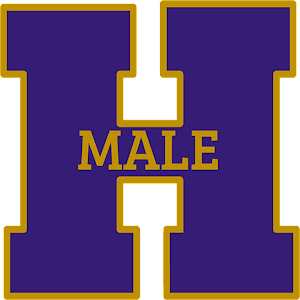 25.  Any graduation day memories?
I was sicker than a dog.  Like horrible SICK.  I had a fever of nearly 103 & my mom took me to the doctor & he said, "We'll get you to your graduation" & he dosed me up full of antibiotics & drugs.  I remember feeling so flush & faint but walking across that stage to get my diploma ... & then just wanting to go home while everyone else went out to celebrate, where I think I slept for 5 days.  ... FUN NOTE - years later, we found out my appendix had ruptured some time in my life when they took my gall bladder out & the surgeon said he cant believe I wasn't ever sick enough to notice.  That night is the only time we (me or my parents) can remember me being so sick. The surgeon said it was a good thing I had taken all those strong antibiotics that night or it could have been REALLLLLY bad.  How scary is that? I SURVIVED GRADUATION is my story.

So tell me some good stories of your Senior Year