The weekend I forgot how nice it was to finally breathe....

a weekend where I took it easy.  A slow, relaxing, no schedule, no need to be anywhere weekend.

I think I forgot how amazing these weekends are.
& now I want more.

Friday, kicked off with a grocery trip - where I had a "Jesus Debate" with a guy trying to sell me our local newspaper. I told him I didn't need it & good luck on selling some.... to which he stopped me & in his best preaching tone, said, "You're a Jesus believer, right?" (I had on a Christian t-shirt) & & I assured him I was - to which he went on to lecture me about if I was a real Jesus believer, I would never wish someone luck & then went into a long discussion on why & where the Bible refers to that. Ok guy... take a breath....

but then he went on & was telling me some bizarre things that he believed the Bible told him in his studies & finally I just knew there was not going to be any discussion here.  He was very VERY intense on his opinions - at one point, I interrupted him & said, "Are you a Baptist preacher?"... just to get a laugh - & no offense to any Baptist. I was raised Baptist - but Baptist preachers are VERY hell & fire sort of sermons & this is the kind of intensity this guy was coming at me with....

Finally, I just had to tell him, "I have Jesus... I'm good.  No matter where that's at, as long as I'm with Jesus, it can be anywhere in this universe"... he didnt know how to respond. He came at me with another attacking thing about how the devil is taking us all down sinful roads every day & how much of a sinner I am (... I wanted to say, You are too dude....) & my response?  "I have Jesus... I'm good"... I finally learned that I was going to be banging my head against the wall to discuss anything with him on what I believe against what he was telling me... so I just started repeating to everything he said, "I have Jesus... I'm good!"... he was getting so aggravated but finally just broke & laughed at me & wished me well as I told him "I hope you sell papers & I'm NOT wishing you luck on that" ;) it was a crazy conversation to say the least - & took about 30 minutes of my time in the grocery. UGH.

I treated myself after that conversation with the new Strawberry Green Tea from Starbucks... a total thumbs up!!

But my Friday night was spent finishing up editing my latest session & watching the movie The 5th Wave. Isn't that a book?  I have to say, I wasn't too impressed with the movie.  Dumb really .. & that ending? Do they really expect to make another one? Glad I didn't pay for that in the theater.

Saturday had me up feeling the BEAUTIFUL day.  The humidity gave us a break & I was all about it - especially since I didn't have any plans on my schedule.

I took some time to work on my Bible Journaling... 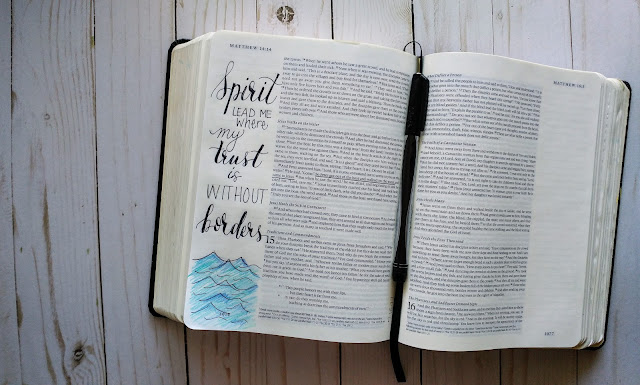 & then made some iced coffee & then did some house cleaning.

I've learned that cleaning my house is something that can happen when I'm not running to a dozen places in a day... who knew? 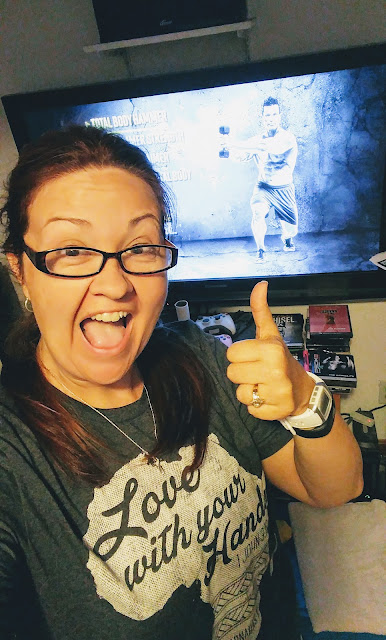 It was time to really take advantage of a carefree day & no schedule & cooler air by going outside & reading with another cup of iced coffee... & my little shadow, Harvey Dent. 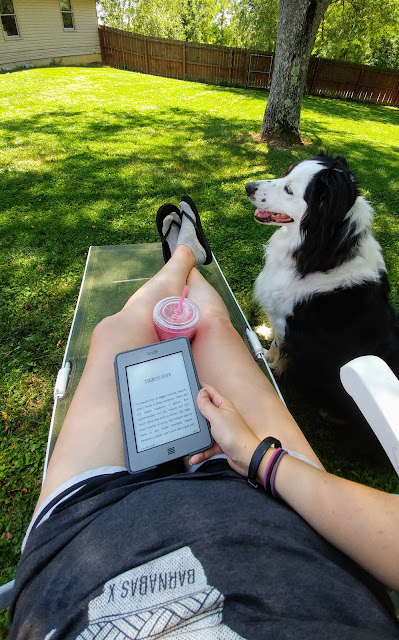 I enjoyed every minute of it... because it wasn't long before the hubs came out with his lawn mower making me move... that's ok though. It made me go in the enclosed room where I wasn't slapping my legs every 5 minutes from bug bites...

& then when he was finished, he took advantage of the nice day to ... & then Harvey Dent wanted to be involved in the family love.

Ricky needed to run down to Home Depot & I told him I'd go - which he said he didnt know how it felt to go somewhere with me on a Saturday since I'm never home (funny guy) & he even let me run into Target to pick up some mason jars. I'm on a total mason jar salad kick right now... even meal prepped for it during the day.   AGAIN - the things I can do on a free day - SHOCKING!!!!

But I took the drive with him but couldn't make myself go into Home Depot - but I'm a smart girl... I took my knitting with me so I entertained myself while he was in there. 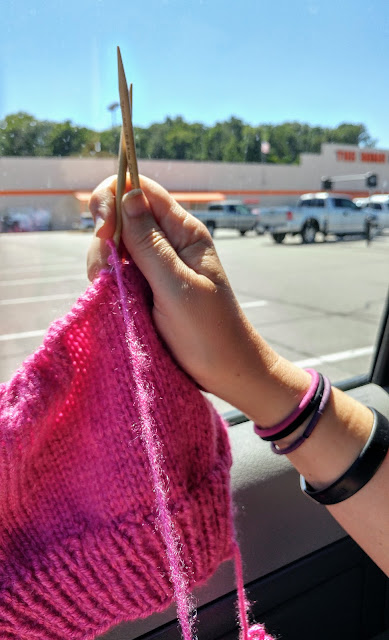 We got home & I took a shower early & then gave Bruno a bath (his skin is SO MUCH BETTER) & then I splurged with another movie for the weekend... I ended up knocking out SO EARLY on Saturday... like 10pm... I am officially old. I remember those days when at 10pm, we were just gearing to head out & meet up with friends. WOW.

... I'm glad I went to bed early though because I was out walking in wet grass in my yard 3 times during the night with Bruno. A solid nights sleep just doesn't happen anymore with our little blind boy.  That's ok - I'll do it to keep him around with us....

I turned on Netflix with my knitting & iced coffee & turned on What the Health... I have so many thoughts. The main one - I want everyone to watch this.

I hate it because people have their minds so set on their opinions on going vegan or cutting out meat or animal products & I just dont get how someone can see studies like this & continue to feel like its totally ok.  Not even for the animals (which is huge for me) but for their own health.  That people come off totally off meds they have taken for years & the turn around in health of some people - & even the athletes that are doing Ironmans & weight lifting competitions all by eating vegan (people are hung up on protein)... it's just so eye opening & full of information - if you want to hear it.

I feel so passionate about it because I have family & friends that just REFUSE to hear anything about this life style ... plus, you just want the best for your family & friends & want them to really HEAR this information....but minds are shut off from it.  So frustrating to me.  & I get if they watched this sort of documentary & then made the choice, but no one even wants to really hear the information on it all.  That's what is frustrating to me.

I do recommend you catch it if you can... & watch it with an open mind to change in your life... be your own advocate for your health & those you love.

But after watching that & pulling out my vegan cookbooks & finishing knitting a hat, it was time to head down to see my Joysters...

We were a smaller group for the day with a lot of our gang traveling for vacation... but its funny to me how 6 people is now a 'small group' when we first started out with 5 of us as the WHOLE GANG.  How we've grown.  Love every minute of talking with these ladies.


I left from there to head down to the grocery to pick up a few items that I forgot to pick up on Friday... I really was on this Mason Jar Salad kick especially after watching that documentary.

I got home & fed the dogs & ate some dinner myself & then it was on to put these babies together... 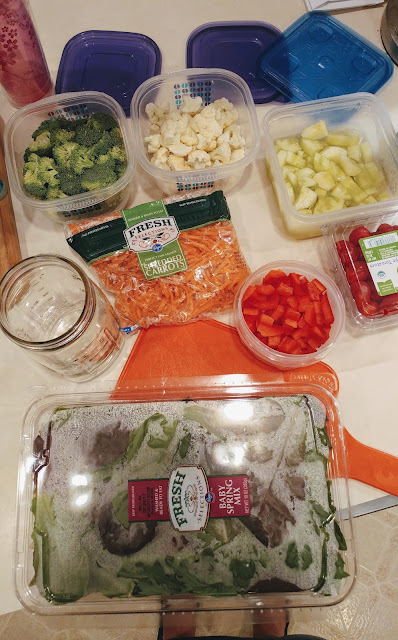 I am so excited to see how it turns out.  How they taste.  I've got one sitting in my work fridge right now counting down to lunch.  I brought in a bowl because I'm not sure if you can just eat it out of the jar (which is why I always read to get the wide mouth jars so you can do that???) or if I need to dump it to mix it together.... we'll see about 1:00pm today. 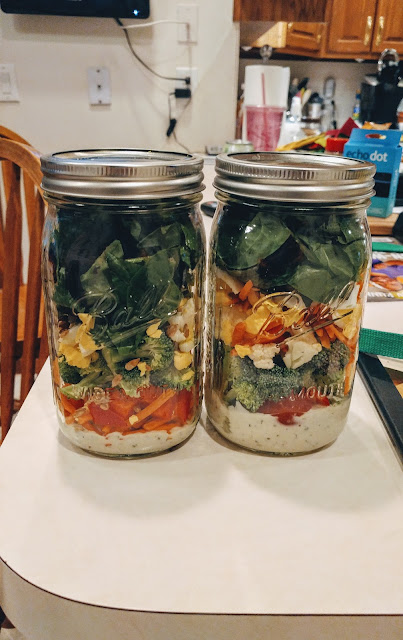 I just made 2 because Wednesdays is my #lunchwithmylove date so that's a given I'm eating out... & that will give me time to make up 2 more on Wednesday night. Should be easy enough since everything is already chopped & ready to go.

I ended up crawling in bed later than I wanted... I try to go to bed early now because I expect those yard walks a few times a night now.  Needless to say, I only had one last night... at 3:40am.... my poor Bruno boy. YAWN....

Get a break in humidity?