The weekend I left my 2nd infusion looking like Hitch....

Here we are with another weekend behind us... & round 2 of 5 down of the iron infusions....

This one went much better - still not great though.

First of all, it was a nightmare dealing with the doctor's office last week. I had called them & told them about the weird side effects from last week, & the high fever for so long was really concerning to them.  So they told me NOT to go back to the infusion center, but come to their office to have them done so they can monitor me.

OK... this was so frustrating because it was like they didn't understand I have a JOB... a job I NEED.... a job I love.  That was the whole issue about finding me this infusion center that was open on the weekends.

The nurse was SOOOO rude to me on the phone when she kept telling me I had to come there & I told her I wouldn't be able to take off 3 hours to do this during the week... & then reminder her that the fever was 3 hours AFTER the infusion anyways - so being there for the infusion wasn't really for any point to 'catch' anything.  The nurse just kept interrupting me & then said in the most hateful tone, "Just call me when you decide what you want to do" & hung up.

So the rest of the week, I kept trying to call to see what I should do - my options to them were, I'm going to the infusion center or I'm done. I am NOT going to lose  my job over this.

& then the doctor's office wouldn't call me back.  I even asked them one day to PLEASE call me back & for them to leave me a message since it's not easy for me to talk on my phone at my desk.

They called... & didnt leave a message.

I was so frustrated with all of it.

Finally, on Friday, a much friendlier nurse called me & told me to go back to the infusion center & if I had issues, go to the ER.

OK then... at lease I had some direction.

Cut it to Saturday morning where I told Ricky there was no point for him to go with me because its just boring sitting in a hospital all morning long - especially when he needed to work on cleaning out our basement where we'll be getting our new furnace put in next weekend.

I get to the infusion center & the nurse was like, "Oh, the doctor called & wants a premed of steroids, Tylenol & some Benadryl"... well, that would have been super nice for the doctor's office to tell me some time during 100 calls I asked for them to tell me what I needed to do.  #grrrrr

If I had known, I would have definitely had Ricky go with me.  Because I am a WIMP on Benadryl. Like, it knocks me out flat cold, like I was in a ring with Mike Tyson & got the right hook to my jaw. OUT!  & I knew I wouldn't be able to drive home taking that.... so I told them to skip that part of it.

The premeds were an additional 30 minutes to run through the IV.... 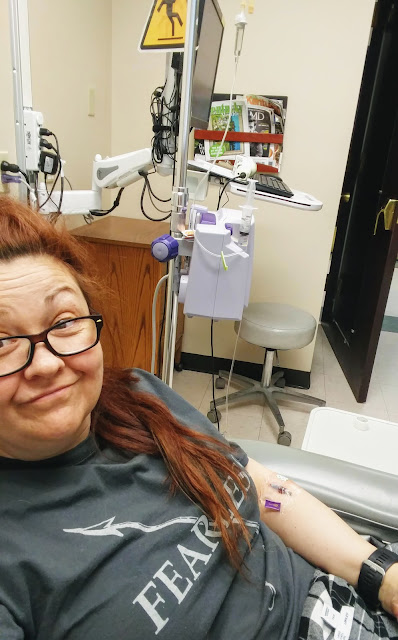 & then the nurse got ready to infuse & told me, "We're going to expand it to an hour"... I was like, "We did an hour last week - can we do longer this week?".... She then tried to convince me I had it for a half hour last week.

Let me back up & let you know - this nurse didn't seem to know anything.

I had asked her what the steroids were for exactly - why they would give them to me... her response was "I dont know - I can ask someone. I just know its the doctor's orders"... m'kay then.

& then she tried to put my IV in the SIDE of my arm. Never saw that before. & mercy me - it hurt SO BAD.  It burned like someone was putting a hot needle though my skin... I had instant tears & she said, "Does that hurt?"... nah, I just like wincing in pain with tears streaming down my face for the fun of it. She had the nerve to say, "This is what I do on everyone else - why wont it work for you?" & then proceeded to pump some saline through it - I literally CAME OUT OF THE CHAIR - it was like FIRE being pumped through. I screamed "GET IT OUT OF MY ARM".... & I can tolerate some pain, let me tell you!!!....when she took it out - blood gushed EVERYWHERE.  Like it was a blood bath.

& then she said, "You're just a special little flower, aren't you?"

I literally wanted to say a few rude things back to her but was just so over the whole thing at this point.  Seriously?

This nurse didnt even help me during the whole time. My last nurse?  She gave me a pillow, a blanket, a drink - checked on me if I needed or wanted anything.  This nurse offered nothing. I sat in this chair for 3 hours with my flannel shirt bundled up behind my head & she never offered a pillow.  She was HORRIBLE.

I want a shirt with that on it now.
I'd love to wear it the next time I knew she was there. #grrrr #evenlouder


But the last 45 minutes, I told her my face was feeling funny.  It had this "cold" but "hot" sensation under my eyes. It was so weird.  It just didnt feel right.  & the feeling kept going down the side of my face.

Oh my gosh... I never have been so happy to just get away from someone's presence in my life.

But as I was walking out to my car, I could feel my face just getting colder but hotter.... it was so weird.

I get in my car, look in the mirror - & the whole side of my freaking face is swollen! 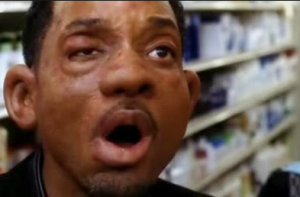 I called Ricky so upset & about ready to have a panic attack... which gave him a panic attack because he was far from me... & then I just cried the entire way home.

I think if I was able to take the Benadryl, it would have been OK.
We did see that one of the more common side effects of the iron I'm getting is swelling of the face. That would have been nice to know - but instead of my wonderful nurse, it was Dr. Google that gave me the news.

& the BEST thing? I felt AWESOME on Sunday. Seriously - AWESOME!!!  I felt like I had energy, I didnt have chills, or a fever or feel really weak or shaky. I dont know if it's the infusions helping - or if it was the steroid I had - because I know steroids can give you that UMPH sometimes too....

I may have more bruises on my arm from a crazed nurse..... but I'll take it.

My goal is to make it through my next infusion - & I'm praying my first awesome nurse is there. I found out the nurses work there 7 days on, 7 off, so I'm thrilled I wont see this nurse next week.  & once I have this infusion, I go back to the doctor so they can test my blood to see where my levels are at. My PRAYER is it's doing so well, that I dont have to go back for the last 2 infusions.

I believe it can happen, right?  Believe it with me & pray for me, will ya?

So I'm hoping this energy & good feeling lasts - at least through another week... Heck, I'll take a good DAY at this point in my life.