The weekend I was shaking to the core....

This weekend.... whooooo - what a doozy.  Not the best we've ever had... but we're coming out of it surviving & under one roof - abet, one COLD roof, but under one roof. So its all good in the end.

Let's start back on Friday.

I left work to take my glasses back for the THIRD time. Come on people. Do your job.
I told them the first  time that they were making them too strong. My eyes have not DOUBLED in prescription, but the doctor was like, that's what I'm getting off the reading.... so they made them... & I couldnt see.

So what did they do when I went back??? Made them STRONGER. You have got to be kidding me. The girl even made me pick out different frames & gave me some long winded excuse on the way the frame was shaped & with a stronger lens, it would actually balance & blah blah blah.... & I was 1000% blind when those glasses came in. It was like looking through those drunk goggles they put on high schoolers to get them the feeling of being intoxicated.

So here we are again.  Back at the eye doctor.  This makes it trip #6 & they wanted the doctor to see me again.... who finally agreed that the prescription - even the first one - was too strong.  So had to get glasses made AGAIN  & go back AGAIN to pick them up. Geez.

I finally got home & walked in & thought, man, its cold in here.
Granted - I am always cold in winter. Its not anything strange to see me walk around our house in my winter coat.  Seriously.  Ricky will be in shorts & a tee shirt & I've got on a hat & winter coat, sitting on the couch.

So I go into the bedroom & turn on the heater & knit the night away... & notice the furnace is not turning off... & yet, our kitchen is staying 65 degrees.

I go to feel the heat coming out & its more like, "WHAT HEAT?" - it was blowing nothing but cold air.

At this point, Ricky was asleep & I hated waking him to bother him so I figured I'd just bundle up & tell him about it in the morning - & I left a note on his bathroom mirror telling him the situation, when I heard him roll over - & I was like, "He's awake enough" & screamed HONEY - THE FURNACE IS BROKE... which, as you can imagine, got a stir out of him. Poor guy.

He jumped up to check it & indeed, it wasn't running right.

Now, let me remind you, we have had to buy a whole new furnace system not too long ago, costing a pretty dime - & here we are again, with it not working. We've had more issues with our furnace/ac unit here - old & new.

We were able  to turn on the Emergency Heat so we stayed warm through the night - & I may have had nightmares on what my electric bill is going to be with the ER Heat running for days on end.

Saturday, I woke up not feeling the best. I felt like my throat was closing & feeling like the germs of everyone at work finally attacked me.

It was cold anyways & I wasn't feeling that great, so I just headed back into my bedroom with the heater on & just knit the day away & turned on some Netflix. 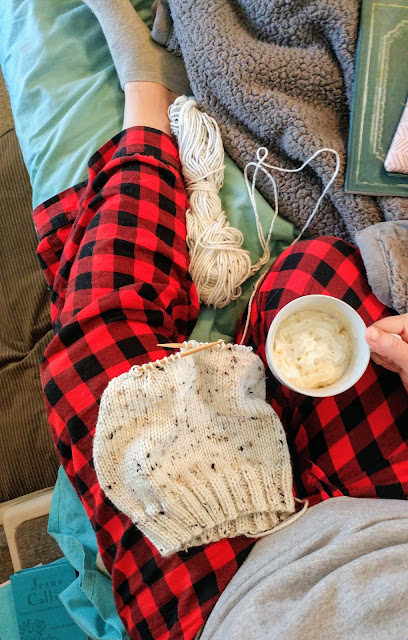 Watched me some more Grace & Frankie (love that show) & then started on the show Lucifer....

& then Ricky decided to go ahead & call a repair man out.to check & see what our issue was.

He came out & told us we indeed had a broken unit - thanks for that on weekend prices - & he would have to come out during the week to fix it. Great....

the look on Ricky's face just dropped& he said, "The repairman left the back gate open"....

The air was totally knocked out of me.  We both just took off running out the gate screaming our heads off.  Both of us in sock feet. Me still in my pajamas.  Ricky ran to the back of the house & then around the back to the front... I just kept running up & down the drive way.

& then all I could hear were cars coming down the road & I just couldnt imagine what was going to happen. I just envisioned the dogs out on the street & these country roads & hills - & cars FYING over them? I thought I was going to throw up. I just kept screaming HARVEY HARVEY HARVEY HARVEY.... I couldnt even think of anything else. I didnt think to scream for Ernie because if your voice is raised, he thinks he's in trouble & doesnt come.

All of a sudden, about 5 minutes later, I look up & around the neighbors side of their house, I see Harvey running full force out of the woods... & Ernie right on his tail.

They ran up to me in the drive way & I thought I would going to pass out.  I couldnt breath. I couldnt stop shaking.

I screamed for Ricky to let him know they were here & he came running back home... & then we both just couldnt speak. We were so numb.

I literally did not stop shaking for over an hour. Like I tried to knit about a half hour after to calm down & couldnt hold the needles.

I also kept the  dogs right next to me. They wanted to go out in the back yard for a bit & I stood at the window & made sure I could see them every second.

I'm so mad the repairman left the gate open. Especially because he didnt even COME THROUGH that way - he came through our house & out the back door. What made him even think he could open that gate up & go out that??? & he also knew we had dogs because he saw Ricky putting them up when he got here.  I am just infuriated with that. I want to call & complain about it but Ricky told me it was an honest mistake.

Those are my babies though. Honest mistake my butt.
I just kept thinking my babies were gone forever & I still just want to throw up thinking about it.

Needless to say, the rest of the night was just a ball of emotions.....
I got a shower to calm down, made the dogs get in bed with me so I could hug them both & I watched the Guernsey Literary & Potato Peel Pie Society

I made it to church & the attendance was down, I guess with the snow....

& then off to pick up my glasses.  Which I THINK we may finally have success.
The bifocals are a little weird to get used to - but at least I can see out of both the top & bottom. Whew. 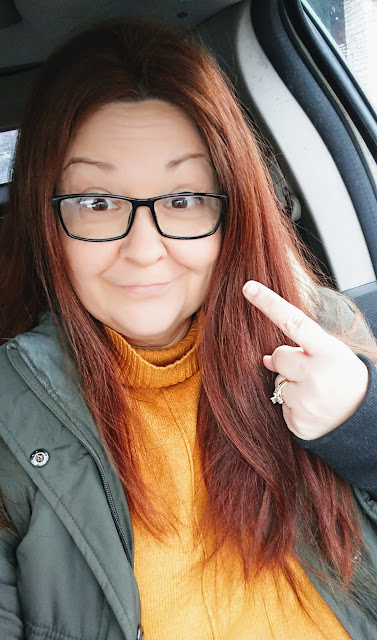 The rest of Sunday was full of cleaning & light bulb changing & just moving to stay warm.

& here we are, back at Monday..... hoping for a warm up - definitely not wanting more snow... &just wanting our heat fixed.

So tell me something good about your weekend.... hope it was less stressful than mine!