The weekend that we cast our ballots

& Happy Daylight Savings Time! ( insert BOOOO!!!!! sounds) .... I LOATHE Daylight Savings Time. It's already miserable enough that it was getting dark by 6pm, but let's twist the knife & make it dark now at 5pm when most people arent even home from work yet. I hate it. HATE IT.  I've already started my count down... 51 more days till the sun starts setting later by 1 minute. 51 long, dark, depressing days.

At least we gained an hour & didnt lose one. That messes with me for a good week in the Spring.

Sorry I missed out on the last few days of October - & Blogtober... but I was on vacation & I just decided to stay away from the computer totally.  It was nice to get a few days away from it.... so let me do some touch points on my week off last week.... 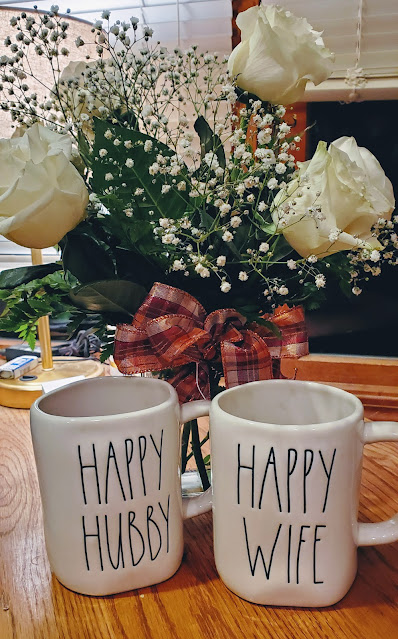 ANNIVERSARY
Yep - 25 years wedding anniversary for us was much like every day in 2020.  We had plans to spent it in Disney World at our favorite Italian Restaurant in the Magic Kingdom, Tony's... yep, the same one from Lady & the Tramp.  But instead, we got some take out in a drive thru & ate at our kitchen counter. Who says romance is dead?

We are big breakfast date people too so we did the best we could with that too.  As I've mentioned before, we're not eating in where people are touching our plates & cups, so we just went to Panera & ordered & ate in our car watching the sun rise. How pitiful is that?

We have some things we do every year for our anniversary that are more like tradition, but we could do none of them... except one. MINI GOLF!!!!  I know... calm down with that sexiness with anniversaries.  But we are a competitive duo.  No - one of us is competitive & one of us just likes to play anything.  I'll let you decide who is who.  We have actually been tied in our anniversary games so this was the year of the tie breaker.  Dang it if I wasn't ahead the ENTIRE GAME.  Was keeping a par of 2 & even got a hole in one. I was killing it. & the back half.  I ended up choking on 3 holes & The Hubs ended up winning by 2.  I always feel like its better for me to lose because I can handle it MUCH better & our day can continue without stomping & tantrums.

I'm just glad we had a decent day to play.  It was cloud & basically the ONLY day of our whole vacation that it didnt rain.... we just had such bad weather all vacation long. Geez. Our luck.

We usually go out to the Disney Store each year & pick out 2 new ornaments for our Disney tree.... but 2020 even ruined that because the Disney Store has gone out of business. & you all know about eating in a restaurant. That was out too. & we also usually do a movie but yeaahhhhhh - no.

Anyone ever see the movie Outbreak from years ago?  About a pandemic... & it all started because of a man (Patrick Dempsey to be exact) coughing in a movie theater.  That movie was made when? 1995... I just googled it. That scene STILL sticks with me & The Hubs.  Every time - to this day - since we've seen this movie, if someone sneezes in a theater, we look at each other & hold our break for as long as we can- LOL ... true story.

SUCH SAD NEWS
The day after our anniversary, I had a coworker who had gotten in touch with me to let me know my manager had unexpectedly passed away. I was shocked. Utterly shocked.  I had worked with Teri for 25 years.  She was the one who hired me.  When I first started, we had a rough start - but I saw over the years, every new person had a rough beginning until she got to know you & then once she was on your side, you had an advocate & a friend.  We stayed in touch even as I left my last job & I even had told Ricky I had planned on meeting up with her to sit outside for some coffee during my vacation - because she JUST retired.  It hasnt even been 3 months....

She had text me on Sept 11 & we chatted how we will always remember each other especially on that day, sitting side by side at work watching the horrific day.  She text me not too long ago to let me know her husband had passed away after a long struggle... & she was devastated that she had to put one of her dogs to sleep.  Teri was as big of an animal advocate as I was so I knew how broken she was over all the loss she went through right after she retired.

Her passing was totally unexpected.  Just one of those things that you are here one minute & gone the next.... & I am just at a loss. 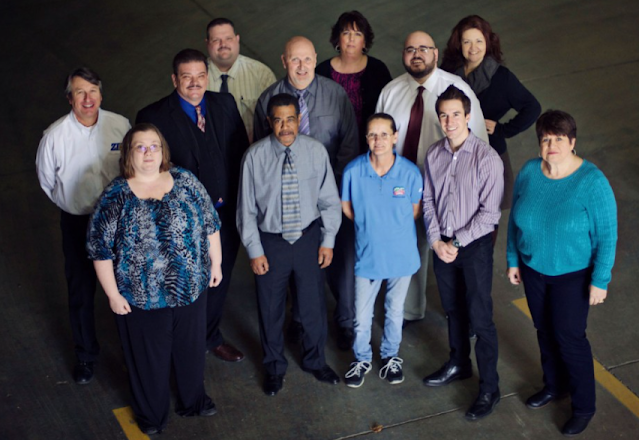 This picture is from my previous job's web site... with Teri on the end on the right & I'm in the back.  She worked there for over 40 years.  She was so excited to retire too - talks of spending time with her sister & traveling & just relaxing.... if this isnt a wake up call for us to remember how short life is & work is not the only purpose in this world.

I always say she watched me grow up.  She hired me when I was 20 years old.... I left working with her when I was 45. You can imagine how much life is in that span of time - for both of us.

She really did feel like family after all that time.  Lifting prayers for her family. Her mother is still here & near her 90's - I cant imagine how she's coping.

VOTED
We had plans to go vote throughout the week while we were off & ended up not making it down there till Halloween.  Which I said was FULLY appropriate with that day being the spookiest & creepiest & scariest day of the year.  Or is that November 3rd?  Either way, we cast our votes.

Our lines were nothing - we walked right in & got our ballots & was in & out in less than 10 minutes.  Probably more like 5.

The best part of Voting for me? The girl who helped direct us to the places we needed to go - she was dressed like Mrs. Potts!!!! I was like - This is my kinda people!  If only I had worn my Belle dress to vote.  The Hubs has his limits on my crazy though. 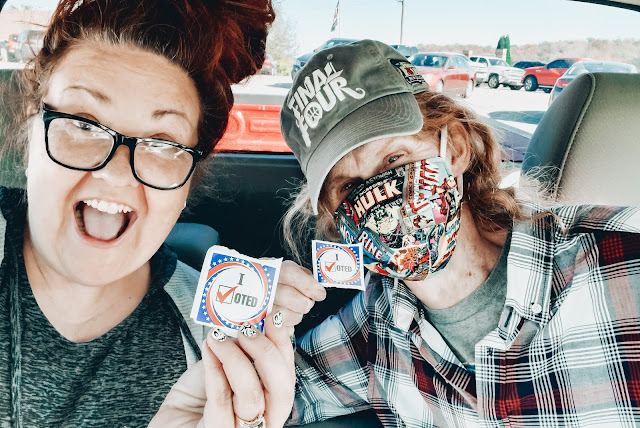 I got done faster than The Hubs & was standing outside waiting for him & there was another woman standing out waiting on her husband. We got to chatting & she just asked me, "you a Biden or Trump voter?".... I have to say, I was a little taken back. I've never had anyone ask me straight out.  I mean, we dont even ask our own family members that question. Is that weird? I mean, we talk politics & what's happening in the world, but never have I asked anyone in my family who they voted for, nor had anyone ask me - much less a stranger.

I feel like in today's world, if you get vocal or take a stand on who you vote for, you instantly take a chance on losing friends or spur on the opportunity for a fight or argument to happen - which is MIND BLOWING TO ME.  This is the world we live in though.

I'm glad to have placed my vote & am thankful that we all have the right to do so.... even in our differences, we can all agree to that.

MISC STUFF.....
I have so much more to talk about since I was away for the past few days, so I'll just try & do them in quick spurts to wrap this up....

* We took 5 - FIVE - HUGEEEEE loads to Goodwill by the end of the week. Its  crazy how much accumulates. & that we still have TONS to get rid of.  We're just ready to clean house - literally & figuratively

* Halloween - I miss living in subdivisions solely for that holiday. I had to drive down to get a battery for our smoke detector on Halloween & took a route back home through a subdivision so I could see kids trick or treating & see costumes & all the Halloween fun.  How sad is that?

* Speaking of smoke detectors - our battery started beeping, notifying us it was dying RIGHT ON HALLOWEEN.  You're supposed to change it on time change days anyways. Good job Smoke Detector.

*  I made a cake over the weekend & wanted to make cupcakes but The Hubs was trying to explain to me why he doesnt like cupcakes, but likes cake.  When its the same thing, but in smaller serving sizes.  It was a legit 30 minutes argument conversation.  How do  people's brain's work so differently.  We obviously never came to an agreement... I just made a cake for him to solely put an end to the madness.

* CHESS - after watching The Queen's Gambit on Netflix, I'm determined to learn how to play Chess. I cant believe I've never done it because I love me some games - especially some mental games.  To say I was overwhelmed  & felt like an idiot was an understatement.  But I'm determined now. I'm going to find me some YouTube videos & some online / app games to learn better & my 2021 goal - BEAT THE HUBS IN CHESS.  Maybe make that 2022. He's pretty darn good.

Did you do anything fun for Halloween?

Do you prefer cake or cupcakes? IS THEREA DIFFERENCE?

Do you have an anniversary tradition you do?