The weekend that had me calling 911 on Thanksgiving...

It's official... the Christmas season has begun. Thanksgiving is behind us.

& for me & my family - I'm super glad to have made it through another one.

If you remember my post from last year - it was the holiday that I spent it all alone, eating microwave mac & cheese sitting at my kitchen counter while The Hubs was with his family & my mom was sick & my brother had to take her around to find a pharmacy open so she could get a prescription filled.  Forget COVID - I'm apparently used to spending the holidays alone.

I guess it's just a tradition now that Thanksgiving is just going to be full of drama & sickness & this time, we took it up a notch with a 911 call.  It was pretty awful...

Thanksgiving started off with the usual stuff... some pumpkin pie making & watching the Macy's Day Parade... which was so bizarre, wasn't it?  I'm glad they still did something at all & with a song from Hamilton performed, it was enough for me.

All the Thanksgiving plans we usually had were all changed with COVID this year.  The Hubs family canceled have their get together as usual so he was home with me.  My brother's household was finishing up some quarantining after a COVID positive in their family (everyone is OK & is now on the other side of it) so I just made some food for The Hubs & I & was making my mom a plate to take over to her.

It's funny because someone asked me what a vegetarian makes for Thanksgiving when you dont eat turkey... I ended up making a roasted cauliflower head. It was DELICIOUS!!!! With a ton of sides.  We were STUFFED by the end. A Thanksgiving round bellies for both of us.... 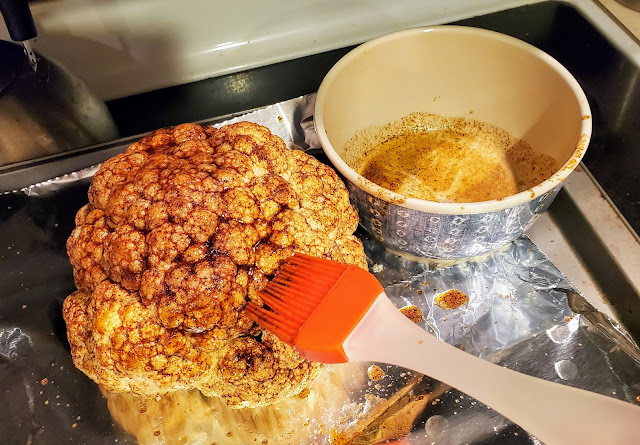 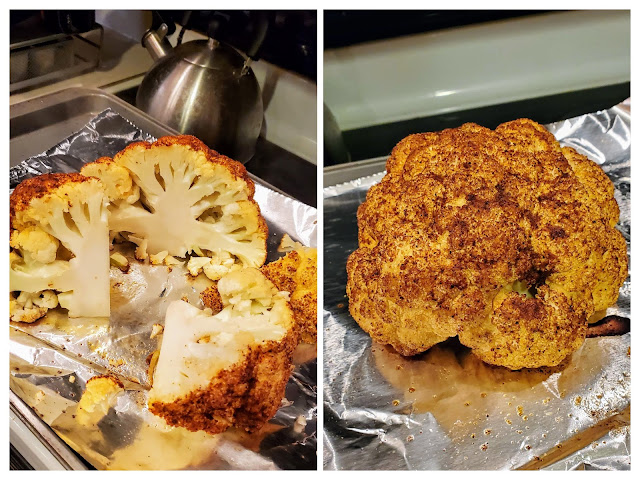 Right out of the oven

I took my mom a plate & a pie & knocked on her door, went in like I usually do... & immediately knew something was wrong from the minute I walked in the door.

I walked back to her bedroom & find her laying on the floor.

It was bad... really bad.  I'll just say, I can tell she had been laying there awhile.  She looked up at me confused & I was by myself & couldnt get her up.  She wasn't acting right anyways so I had to call 911.

The lady on the phone was so kind & helpful & stayed on the phone with me having me ask mom questions -which she wasn't answering - & a young lady from the fire department got there first.  She was just the youngest thing - but she was so good with mom. So sweet & gentle with her.  She got mom to respond some to her... & then here came another firefighter & then the ambulance got there. 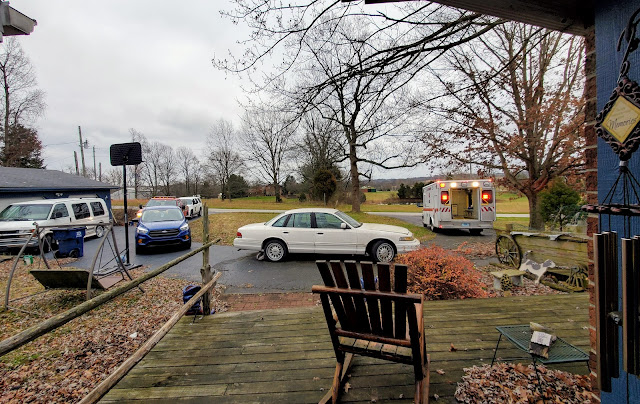 They were shooting questions at me asking the last time someone talked to her or seen her - I had just taken her shopping & I was looking around her house to see if I could find anything out.  It was a lot .. overwhelming.  We figured she had been laying there probably about 12 hours... if not longer.  But they moved fast & she was in the ambulance & gone in a blink of an eye.

They told me I wasn't able to go to the hospital with her & they would call me with any news...so the rest of my Thanksgiving was just a lot of phone calls from the ER nurse - ER Doctor - the hospital pharmacy - the admittance team - another nurse.... it was crazy.  They ended up admitting her & getting her to a room late in the evening.

... I think our Wood family Thanksgivings are just jinxed now.  I have never really been a big fan of that holiday. I think I can attest that I REALLLLY dont care for Thanksgiving anymore.

Friday was Black Friday & just felt so weird.  The Hubs & I have gone out EVERY Black Friday since we've been together- over 28 years.  We've done the 2am wake up calls to be in line standing in freezing temps for hours on end - these were the days that stores werent open on Thanksgiving.  We have loaded up the car, came home to drop off & go back out to shop more.  We get out there to find all the deals.  This Black Friday in 2020.. we never left the house.  I take that back - I had to run over to mom's to take care of her cats... but I did that even in my house shoes.

I ended up getting phone calls all day about mom from the hospital.  All the tests they had run on mom came back OK so they werent sure what happened.  The neurologist had called to talk to me too - & they were waiting to run an MRI on her.  I had talked to mom for a little bit on the phone & she just still wasn't making any sense... it was after 6pm & they were still waiting to take her down to the MRI.

Saturday, I had to run down to drop off books at the library & they had called me & told me they were moving mom to the rehab center shes been at a few times already.  When the EMT had taken mom out of the house on Thursday, she had nothing on her or with her.  When I found her, she didnt have anything on - & they had just thrown a sheet around her & taken her so fast... so she had nothing to go to the rehab center with.

I came back up to our area & packed up her stuff & they told me I wouldnt be able to see her there.  I got there with all her belongings & they told me she had JUST been transported there so if I wanted to take her stuff to her room & help her get settled - they would let me. Because with her being in this nursing home/rehab facility, they said she would be quarantined in her room for 2 weeks with no visitors at all.  & if she's there after 2 weeks, we have to make an appointment to visit her in a heated tent they have out in the parking lot.  I was grateful I got to take the stuff up & see her for a bit.

They were all over keeping things as safe as possible.  Of course the temp & normal questions - but they gave me that face mask too - they had brand new ones in packages, you opened them when they handed it to you - & they said no one could walk around without both the mask & face shield. I had to stay 6 feet away from her too - but glad to even get to check on her.  They gave me 15 minutes to see her & then I had to leave. 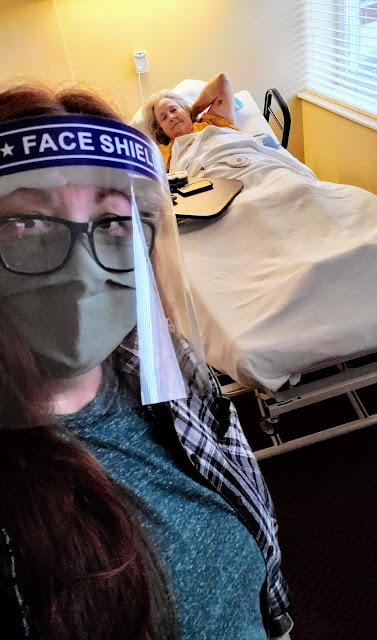 It worked  out well because I got to help fill out her paper work with her nurse & see how she was doing. She looked really good actually.  Her arms were tore up for the needles in the ER (you can see bruises on her arm even in the pic above) - but she always bruises easily & they have issues finding her veins.  She was still a little confused on some things but she understood where she was & what had happened.

I spent the rest of my evening on the couch watching some Christmas movies with The Hubs.  We watched the new The Christmas Chronicles 2 on Netflix & we both enjoyed it so much more than the first  one.  I just think Kurt Russell & Goldie Hawn are just the cutest together. 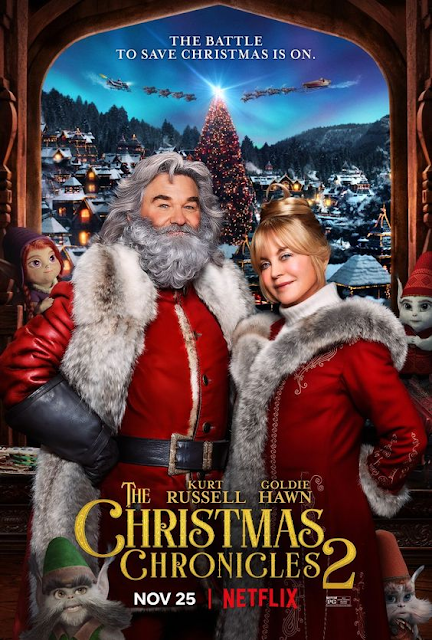 Sunday, we got up early & thank goodness I had made a cup of coffee earlier than I usually do because it wasn't too late in the morning when our electricity popped off.  We thought it would be just a on / off thing because we had noticed it had gone off in the middle of the night also... nope - it was off for 2.5 hours!  At least it wasn't freezing out.

I had ran over to my mom's to let the cats out for awhile & saw the issue.  Apparently a car had wrecked in a pole in the middle of the night & they rigged it to get us through the night - but had come back to replace the whole pole & lines. 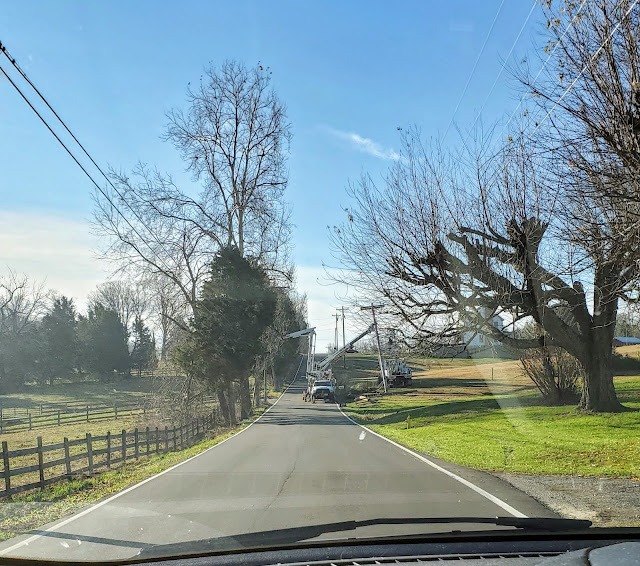 It worked out well that it was a sunny & decent enough day. I wrapped up in a blanket & grabbed a book & sat in the sunshine & read.... missing my coffee.  I almost ran down to the gas station to get a cup of coffee - that's how desperate I was - LOL!

The Hubs & I were sitting outside on the porch - me reading, he was in the lounge chair with the dogs laying on him... & all of a sudden we heard the neighbors heater come on. I jumped up so fast, my blanket just dropped... WE WERE BACK ON. I never made coffee so fast in my life.

Nothing exciting happened the rest of my weekend. Just ran back over to mom's to feed the cats & make sure they were in the house for the night. It's getting cold here the next 2 days - even a chance of snow!!!

I talked to mom for awhile & she was excited to have Hallmark Channel up there in her room.  They're going to start working with her tomorrow in her room since she's quarantined... so we'll see how this week goes with her.

I appreciate all the messages so many of you sent me & the prayers lifted about mom...

& I hope you all had a safe Thanksgiving. I know so many people actually did what was requested & kept the celebrations down to households or followed guidelines of eating outside.  I know it was just a hard, difficult holiday for a lot of people.  Let's just look forward to 2021!

Did you do any Black Friday Shopping?

What was your best deal?

How different did your Thanksgiving look?

& let's give it up to the amazing first responders that worked  on the Holiday & were amazing at what they do!