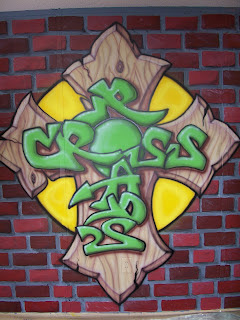 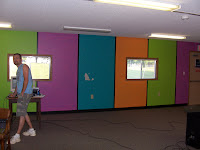 Y reveal the changes that has been taking place in our Jr. High Trailer! I've been wanting to share pictures & stories of the changes, but haven't been able to because we were wanting to surprise the kids. I hope they were surprised with the new look because it is an awesome transformation!
(Before Picture - with all the colors)
Erica, Joe, Ryan, Jeremy & Chris, along with myself, got together ALONG time ago & started on the walls. We started with a stencil that Jeremy made up & we did the bricks on the wall. It turned out better than we had ever imagined - thanks to Tony, my brother, who is also an artist, who came up & showed us how the shadowing & highlighting makes all the difference. Unfortunately for Ryan, he w 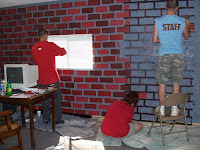 as the only one who was decent at that - so he got the job of the detail work.

Then, my brother designed up our logo for our trailer, CROSS ROADS, & he was off to work. He brought up his supplies & air brush equipment & he made the most awesome design. When he was finis 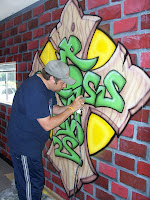 hed with that - he found the Igthus design with Jesus' name & put that up on the front - it was awesome! Then he finished it off with the "metal wall" that has rivets & even made window covers that were designed for the room. It is truly a change.
So the kids finally got to see it today. Jeremy, our youth minister, had all the kids stand behind a door & he had a bus from the nursery in front of the door & had them yell, "MOVE THAT BUS" - It was funny to see their reactions. We had worship songs & during the music, you could see the kids looking around & taking in all the designs. The coolest thing for me - my brother, his wife & their daughters came. My brother probably hasn't graced the doorway of a church in about 25 years - I loved having him there. The kids w 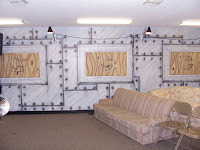 ere so thankful to him & he got plenty of hugs from the gang.

But as Jeremy reminded everyone - the room may be different, there may be changes, but we are all still praising the SAME God who has been there, was there & WILL be there in that same room with us as we learn & grown. The only change we want to see in there now is growth - growth in learning & connection with God! Now, we just get to do it in a cooler environment! 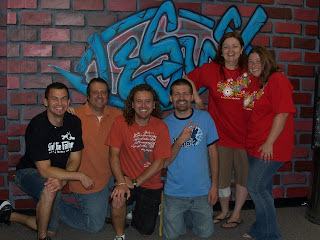