Time for some CUTE! 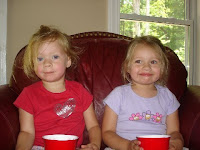 My nieces started school yesterday. Well - not technically school. They're only 3 - but a Pre-K sort of class. This is HUGE for them because their whole lives, they have only been around mommy & daddy, Papaw & Yaya (my parents), Poppsy & Mawmaw (other grandparents) & Aunt Bec & Uncle Ricky. They know my brother & SIL's friends - but the outside world - they just dont care for it. They're just not use to being around other people - so its been hard to get them to venture out into areas where there are "strangers". The bad thing - the world is FULL of strangers & for them, they just dont care for it. They already had a "school" they tried last year that lasted all of 4 days. They made themselves sick about going.
Well, they are getting better, slowly but surely. So their mommy & daddy took them to the door yesterday to drop them off. The parents aren't allowed into the school - I guess that helps with the good-bye's. But Sophia was really ready to go. Everyone's been trying to pump up the girls on how fun its going to be & meeting new boys & girls their age. Sophia is more the open one - she's shy, but it only takes her a few minute to warm up. She was a go - ready for her school!
Madi - OH MY! She's the one who will tell you "I dont like people" - so this was going to be rough for her. Juli told me as soon as Madi opened her eyes in the morning she said, "I'm not going to school!" - a fight on their hands waiting to happen! Well, they got to school - Sophia already made her way in & Madi said, "Nope, I'm not going!" - so after a bit of talking to from her daddy. she finally gave in but her response.............."I'll go in - but I'm going to be MEAN!".......& then she stormed in! The girl speaks her mind - that's for sure!