THE GREATEST WEEKEND EVER! 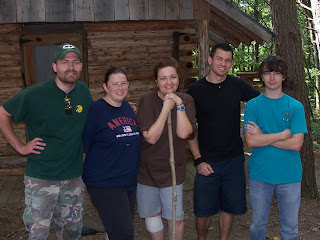 Yep, I'm coming back as predicted - a litlte high, a little wild & a whole lot woozy!!!!! Ironically, the weekend topic was on Fear & every thing we did almost had my name marked with fear acrossed it! But standing there as an example to these kids - I was challenged like no other & I felt like I had to push myself further than I thought I could EVER go!!!
The dreaded "GIANT SWING"....oh my goodness! When I saw what it was - I said I would do it but I said I had to go second - go early & not watch everyone else - or I'd never do it - so Ryan was my partner & we harnessed up & did this! I still can't believe it! My first mistake was looking down on the first try - I instantly became afraid & told them to stop & we didn't make it to the top. You can see from the video - I was freaked out - I think you can actually hear me sobbing!!! But let me tell you - the cheers from the kids & my friends & leaders - it pushed me. So I went again for the second round! WE MADE IT TO THE TOP!!!! I was determined NOT to look down. I just kept looking at Ryan who just kept talking to me & telling me we were OK - it made a huge difference to change the focus. The drop - WOW - BIG! I have never in my life thought I would do that! And for the record, I'm yelling: 2 Timonthy 1:7 - which was our verse we focused on the night before:
"For God did not give us a spirit of fear & timidity, but of power, love & self-discipline."
And coming down - I couldnt hardly even stand up - my legs were trembling & shaking so bad - I had to instantly sit because I thought I would pass out! But all the kids just ran up & hugged me & that made it all worth it!

We also had some amazing team building exercises that were so neat to problem solve together & I just love our church family, our youth, our leaders, my friends - I think we are the BEST team together! But the end of the team building brought us to the dreaded High, wild, woozy!!!! You cant even imagine! You had to climb a ladder - & remind you, I dont even climb a ladder to change the light bulbs because they're too high - & from there -you have to climb up a tree that just had staples sticking out of them. THEN, you balance on a rope, & you lean on each other - the rope gets further & further apart where you have to lean in to keep each other pressed on it. I did NOT think I would do this. The climb scared me more than anything! I watched everyone else doing it & I just kept pumping myself up! Finally, I decided, I've got to try! I just kept thinking, if I leave & never TRY - how angry will I be - when will another opportunity come like this? I got harnessed in & Ryan ended up being my partner. Learning from the swing, I knew instantly not to look down - this was, they say 30 feet in the air - I believe it was like 100 ft - in my mind it was & believe me - that's how I looked at it.

(In the picture - see the ladder at the bottom - that's already high up - & you can see the wires at the top of the picture - that's how high up we had to climb! - I actually have a video som 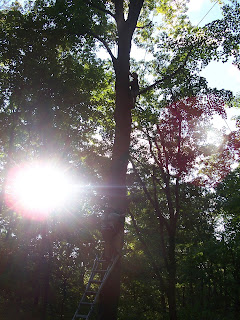 I started out praying for the women who harnessed me in - seriously! She laughed at me! Then I stood at the ladder & felt like Rocky - shifting my weight back & forth & the kids & everyone just started yelling for me. Talking about encourgaement pushing you - man, nothing like it. I went off like a wild woman! I didnt look down ONE TIME!!! Ryan was actually at the top waiting for me & he told me to look up - I looked up & saw how far I still had to go & it freaked me out - I just kept my eyes forward on the tree - just the next level to go - that's all I needed to look at & you know what - before I knew it - I was at the top! The easiest part was going across the rope just because I just concentrated on my partner & working with him - looking into his eyes - trusting & focusing on something other than fear! We didnt make it as far as other teams - but we made it further than others & you know what - I made it further than I EVER THOUGHT I WOULD!!!!!!!!!!!!!!!!!!!!!! I felt like I could conquer the world after that!!! Faling off the rope & just coming down, I felt so happy, relieved that I tried it - just proud of myself! 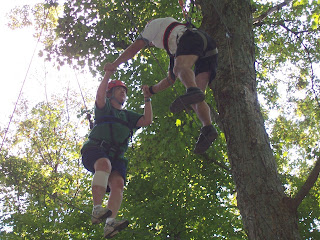 But let me tell you - the scariest thing came after all the kids went to bed. Just enjoying conversation & talking with my friends & leaders, I thought of what the guides told us throughout the day doing these challenges - how each thing we did during the day built up to the next, harder thing we did. Sitting around the camp fire & talking, we started getting into some wonderful Biblical discussions & next thing I know - I can feel the fear in me all over again. What kind of fear? I'm sitting on the ground - no harness needed (as attractive as they are!!) but the same fear that I felt walking up the tree was in my gut again. Why? Because it was just a time to be open & honest with people & things that we hold in, so fearful of what others think, or how others will look at you - it all came to a head. I thought, I've been through the most fearful events of my life today & I DID IT! I pushed myself further than I ever thought I could. Now, I'm faced with a spiritual fear - do I trust people? Do I open myself? Do I put myself out on the line? Let me tell you - I kicked FEAR's BUTT that day! I had probably some of the best conversations ever & heard the most comforting & needed prayer that I ever needed to hear in my life. I can honestly say, this was probably one of the greatest weekends I have ever had in my life!!!!
And let me tell you - these kids - we have some amazing kids in our church! For them to be so encouraging & some of them at their age, so willing & eager to know God - awesomeness right there! The prayers that some of these kids say will melt your heart! And we even had a fellow 7th grader who led a devotion during campfire time - he is a preteen & let me tell you - words he said made all the leaders even think & inspired us! These are the type of kids we ahe - some amazing God-FEARING kids!
I honestly sit here now & reflect over it & still can't believe the things that happened! This is one of those events that words can not & could not describe the experience!
Friendships were built, other friendships were strengthed, trust was given ......let me tell you - fear met its match when it met us this weekend!
I encourage you - if there is a fear in your life - face it - conquer it! 2 Timothy 1:7!!!! And the funny thing I found out - it doesnt have to be a fear of something like heights or bugs - a fear of opening up & sharing or being yourself to people can be just as scary! Like I shared with the kids & I keep telling myself - everyday, push yourself - surprise yourself with what you can do! Don't let fear be a factor to you!!!!
Oh & for the record - Yes I came home with only one bruise!!!! ( No applause needed!!!) But that is from hugging the Giant Swing rubber pad so hard, my arm got caught on the wire. I didn 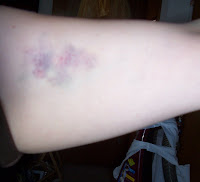 t care - I WASN'T LETTING GO!!! And I know this is long - but I have to say - the reason I came away with so many less bruises than I'm capable of - the people with me! I had SO MANY people looking out for me - holding my hand down slippery slopes, (Thanks Joe!), carrying my things for me & walking with me (Thanks Erica), making me walking sticks & going way out of the way to take an easier slope (Thanks Patrick), giving me a cabin that didnt have steps that I would have EASILY tumbled down (Thanks Jeremy) - so many people did just small things that all added up to taking care of me - & I have to tell you - that right there just made my weekend!!!! 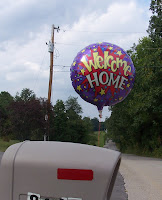 And FINALLY ! I have to show you what I came home to - driving down the road, I see on our mail box a balloon that says "Welcome Home" from my hubby! And I pull up & see our yard is all mowed, & freshly manicured & just looks awesome (I've been asking that for awhile) & I walk in & get another balloon with a card that says "We missed you" from my hubby & all the doggies!

See what I'm talking about - probably one of the greatest weekends ever!!!