Knitting in the Dark

I know I havent given any knitting updates lately. Yes, I've still been knitting, & especially with STILL NO POWER!!!! (Day 5) there's alot of knitting by flashlight o 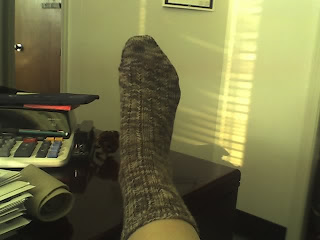 I've gotten stalled on socks though. I'll do that every now & then - crank out a bunch of socks then dread looking at little size 2 double pointed needles! I actually finished a sock that I LOVE - the pattern is beautiful, its a neutral color that I can wear with anything, but I've been stuck on the 2nd sock now for about 2 months! Can't make myself finish it! I definitely have to be inspired to knit on a project.

But I have been working on Christmas presents! Can you believe its that time again? My goal this year, to mak 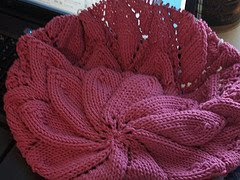 e Ricky's family those awesome Hemlock Ring Blankets. I finished my first one & its beautiful - still need to block it though. I've gotten great advice, but still afraid since that will be my first blocked lace project. I made it with chucky yarn too so its nice & warm & big! This second one I'm doing right now, in the pink, is made out of Cotton-Ease & I'm loving this yarn. Never tried it before - but its just so soft & nice & its coming up very pretty!
So all my knitting friends - just because I havent posted a picture lately doesnt mean I've abandoned my knitting! I still have needles everywhere! And I do mean EVERYWHERE - I actually had a metal knitting needle drop behind my dash board in my car! Ricky just shook his head & told me he hope it doesnt get caught up in my fan!!! That won't happen - my needles are my friends! :-)