Yes - all my family is safe in Texas - they got to go back to check out their home & everything is not as bad as others homes. They lost most of their fencing - all the tress are gone around the area, but apparently, they have NO flood damage! Praise the Lord! They are still staying at Steve's family just because there is a gas-stove there so dinners are possible. Julie said Isaac is getting a little cranky because its still warm but cool baths are making him happy. 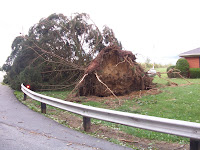 So we think Ike is over with, right? Not so fast!!!!! It headed right towards us! 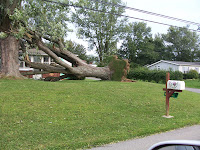 Yesterday morning, just going into church, you could feel the winds blowing & picking up with each hour. By noon, the winds were blowing so hard, the electricity popped off. Then in a matter of minutes - trees were blowing down, snapping like tooth picks, pieces of debris were flying in the air, our church sign blew around like it was a sheet of paper - it was crazy!!! The highway & roads were closed everywhere. People literally couldn't get home because of downed trees & downed power lines. And when I say downed trees - I mean HUGE 30-40 ft trees with roots bigger than my car down! 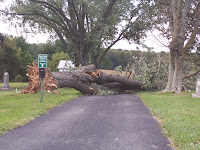 They said the winds were clocked at 85 mph & it has done more damage than the big tornado of 1974!!!! There are over 250,000 people without electricity today now too. We have none at home ourselves & not expecting it for quite a while - could be up to a week (Please Lord - NO!!!) - but I made it to work & they moved our computers to an area that had electricity - so at least, I'm in the land of the living for a little bit!
(The picture on the right is a tree down in the local cemetery....it knocked down some ancient headstones....sad)

And its getting scary because gas is becoming an issue now too - most places don't have power so you can use it - & the other places are running out. And food? Who can cook with no power - & the frig & freezer down with also - you can feel panicked if you let yourself!
But everyone is hanging in there! I've got my flash lights ready for another night of knitting!
And thankfully, I think Ike has almost had his last hurrah - (I think - I don't know for sure because I can't see the news!)