Let there be Light!!!

OH MY GOSH - we have power!!! It came on while I was driving home from Jazzercise. Ricky called me & told me, more like screamed to me, "WE HAVE LIGHTS!" - when I came home, we just ran to each other & screamed & jumped like we won the lottery! We kept saying, "I dont know what to do first!" - I put on some spaghetti & Ricky had to get back on his xbox - the man can only go so long! :-) But luckily, Ricky cleaned out the frig throwing everything away for me on my drive home so I got to get in there & scrub it clean while its empty - that's nice! So there's a picture of my working frig - empty.....that's a bummer - but at least its on! My Diet Big Red & Diet Coke can cool down - YIPEE!!!! 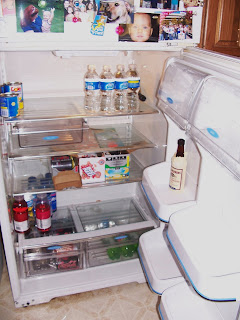 By the way - that looks like a bottle of beer or something on the side - its worshire sauce - I told Ricky to throw it out, but he's clinging to it. I since threw it out while I wiped everything down.

And I had to laugh - there is a bottle of champagne in there. (You can see it peeking behind the water) Ricky has had that since we met & always said we'd save it for a special occassion. Well, we've since become engaged, got married, moved to a new home, had our first grandbaby, had some pretty big things happen in life since we've been together 16 years - & yet, its still in there! I'm wondering what he considers to be a special occassion! If I pass away & someone sees him pulling it out & opening it - break it over his head! :-)
I'm SO HAPPY!!!! A warm shower is calling my name!!!!