I was watchin"Dirty Dancin" for the ump-hundreth time the other day - seriously, who can get enough of Dirty Dancing? It was at the final part where "No one puts Baby in the corner". I have to say - isn't that the dorkiest line EVER in a movie - but who cares....Patrick Swayze coming back to do his dance, his way - you overlook it. But my favorite part in the whole movie is just something so small! When he takes Baby up on stage & starts the music & he walks over & lifts her arm up & slides his hand down her side - there it is - he kisses her nose right before the dance! Anyone know what I'm talking about? I just love that part - just the smallest, simpliest action there is! I wondered if anyone else even remembered that part or noticed.

I was thinking of other movies that just the small parts get to me - in "Enchanted" - when Robert & Giselle are dancing & he just sings to her on the dance floor - I seriously tear up each time - how corny is that! But again - its the smallest thing that means so much!
Another favorite movie - "A Walk to Remember" - & if you are a reader - READ THE BOOK! Its so much better than the movie!!!! There are TONS of scenes that get me in that one - but my favorite, when Landon & Jamie are getting married & her dad, the preacher is talking about the vows & Landon just looks at Jamie & whispers "I love you" - AAHHHH...knees melt! -

The Radio being raised up in "Say Anything" 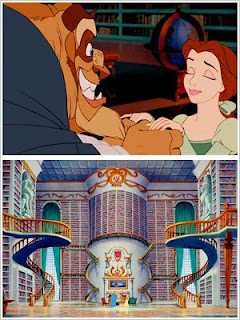 The coin being raised up in the air & dropped in Demi Moore's hand in "Ghost"
The song that Adam Sandler sang to Drew Barrymore in "The Wedding Singer"
AAAHH - the little things ..... don't they make a huge difference? Have you ever stopped to think of the little things you do & how they affect someone? Have you ever been in a bad mood or have a really bad day & just a smile from someone makes a difference - or someone sends you a text that says, "Is everything OK? Remember I love you" - simple things that mean alot!

But of course, the best of them all - when the Beast gives Belle his Library because she loves to read!!! I am truly, 100% a sap because I cried when I saw that part!! And in the Broadway play - its such a bigger deal than the movie - I sobbed like a baby in the play.....yeah, small gestures mean alot to some people - just when they need it the most!