Finally - I can get up some sort of pictures from our weekend - the BIRTHDAY WEEKEND of that cutie pie, Isaac!
Saturday, the "official" birthday - we got to start the day off with a parade! Two little twin girls were in this parade & they were so good waving! So good in fact that every picture I got, has their hands in front of their face waving! I gotta work on their Princess wave with them! (There's Sophia with her hand right over her face - & Madi is behind with a sorta-princess wave going on!) Little Princesses to me on that float! 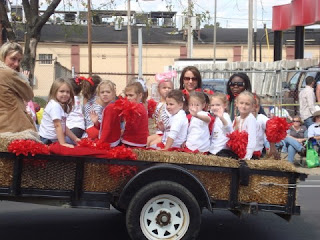 Isaac enjoyed the day & watching all the fun stuff going by! 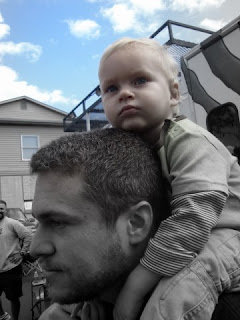 Then we were off to a day at Huber's Orchard & who cares about anything Orchard-y when a playground is around! Its a good thing Pappy is agile enough to run on playgrounds with Isaac... 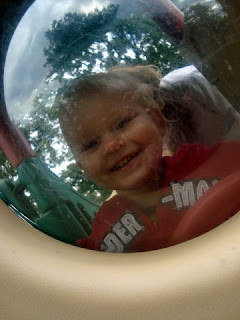 Off to a corn maze! Isaac led the way, having fun running & taking the turns on the path. Ricky, of course, being the kid he is, would hide in the corn even though the signs said "Stay on path"... & then Isaac was off to run THROUGH the corn too... what's a Pappy for, but to break the rules? 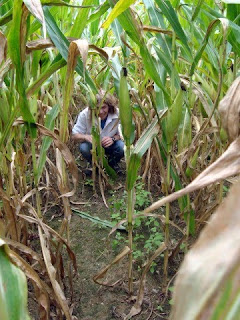 It was a long day at Hubers... enough to wear a baby down. And because he is now two years old, he is due for a good fit - & Nanny is always there with a camera. I think he's cute, even when he throws himself on the floor, screaming for bloody murder! 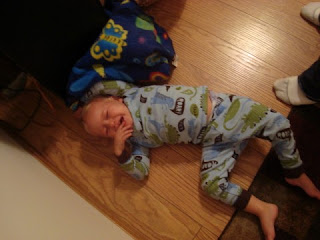 It didn't last long though... he was up chasing dogs within the next few minutes & talking on the phone to Yaya! Here he is pointing to his Mommy... We found out, my mom was asking where everyone was & he was pointing to us all every time... He knows his Nanny!!! He'd point to me every time... heart melt.... & notice Julie's cute little belly???? You ask Isaac where his baby brother is & he points to his OWN belly!!!! 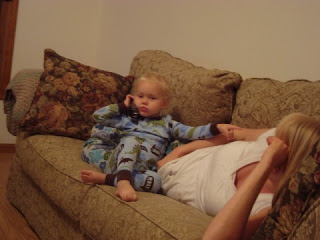 Sunday - we started the day with a cook out for the Stephanie's Hope Mission Fund!!! My buddy Lynn is just amazing organzing it & pulling it off again, along with some INCREDIBLE people from church! Smoked pulled pork... YUMMY! And a cornhole tournament! Steve & I teamed up- & for someone who never played before - that would be Steve, though people may have thought it was me - we did pretty good! Isaac on the other hand wanted to play too & when he was told he couldnt - we get another cute pouty face! 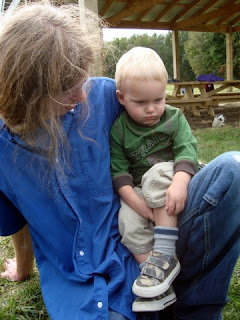 But he occupied himself with bean bags... until someone took one away from him... Thanks Kay (HEHE!!!!) 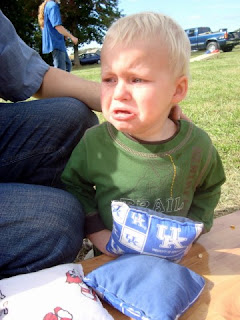 And then we finished up & was off to the BIG EVENT... the BIRTHDAY PARTY!!!! I'm going to show the rest of those pictures tomorrow... I know we're on Isaac overload right now - so want you all to take it in doses! Believe me - tomorrow, you're going to smile & go AAHHH with the birthday pictures...
But I gotta leave you with a picture of my little red-headed buddy from church! Everytime I see this little girl, I just want to pick her up, & hug her & take her home with me... she's the cutest little thing! Tell me that face isnt just adorable... Her's - not mine! hehe!!! 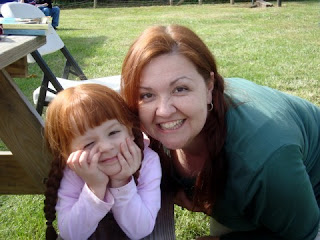 Hope you all are enjoying your day... today is my last day with Isaac - they leave bright & early tomorrow morning... so if you hear sobbing in the distance - that will be me....