Poodles, nickles in the rear & Len's in a good mood???

I was late getting home tonight & thought NOOOOO - not ANOTHER night of missing Dancing with the Stars... but alas, I'm back... & this is what I see from the beginning...Does this resemble anyone you know? 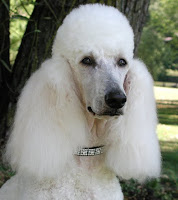 Yes - it resembles our host, Samantha Harris!!! (Who did this poor girl's hair?) I was so distracted by it the WHOLE night!

Let's get this party started!

Natalie & Alex - Its Paso night... LOVE Paso night - all the anger & passion in the dance.  I love this girl, but I was just sorta bored.  Dont know if its because "American Woman" was the slowest song EVER to Paso too... or if I was tired from standing thinking she was a floating flag across the floor...It just didnt do anything for me.  Maybe because the two of them look like they cant stand each other?  She has no problem telling him she has no attraction or chemistry with him at all.  While its nice to see dancer not fall in love & hang all over each other - come on Natalie!  He's one good lookin' Russian - at least ACT like you like him!

Aaron & Karina.  Can I say first, I saw them on some award show this weekend... these two just go through me.  I think Karina has given him a lashing on how to act, because he's trying to act very mature & manly while learning the tango... but to see him fall to the floor & giggling because he was trying to act sexy... umm yeah - not so manly.  The judges liked it... I think they were just tired of seeing him cry. 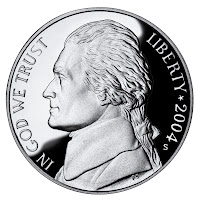 Michael & Anna.  Girlfriend needs to keep her hair dark!  And Michael needs to keep nickels out of his butt!  Yes - you heard me right!  He practiced this dance by putting a nickel in his butt & holding it there while dancing (I have to wonder, does this technique really exist?  Is THAT what's been wrong with Aaron?)... who cares how their Paso went... it couldnt have been good when all you think about is the "Bad News Bears" theme is playing.  Really - what is that name of that song?  Everyone automatically thinks of a little league gone bad when that is playing!  But in the end, Bruno ended up with the famous nickel... & it could be yours for a price.  Apparently, its going on Ebay.

Mya & Dmitry - We get to see these two get out of the studio & help with Habitat for Humanity.  I'm waiting for Miss Piggy to come around the corner, carried on some wood (love that commercial)...All I can say... let this girl build a house every week, because she NEEDS no time in a studio... she's AMAZING!!!!  She had the tango & I swear, she looked better then the pros.  I was just waiting for Len to make fun of them because I've seen him secretly wearing "I hate Mya" shirts... but he actually liked her!!!!  It was crazy good!!!  ... I do think she was jipped though... this was a 30 dance... & they gave straight 9's... BOO! (I can boo the judges from home all I want... & yell at Ricky about it... that's the fun of watching at home & not in the studio)

Mark & Lacy.  They had the Paso & the talk goes back to Mark's past as a fighter.  Who knew he had to put his fighting skills to a challenge in Hell.  Lacy comes out of a wall of fog with the scariest mohawk for a girl & flames are everywhere & the screen is just all sorts of red... I was scared... felt like I was seeing a part of Dante's Inferno...  But really - Mark did pretty decent.  I like the guy... he looks just like a friend of my brothers too.. seriously!  I've got to find a picture.. you're going to freak out when you see how much they look alike!

Donnie & Kim. Things to put on my to-do list... 1. Get a Vegas ticket & go see Donnie & Marie's show! 2.  Get a dress like Kim's ... wasnt that black dress the best dress EVER in dancing history!  3.  Grow another foot to be as tall as Kim in that dress!  4.  Try not to laugh at Donnie Osmond trying to act sexy!!!.... I mean that in the best way!  He looks like he's trying not to laugh when he's acting sexy... but the Argentine Tango was really incredible!  And his "kudos" to Bruno saying "You took me there" made the dance the best of the night... You gotta love Donnie's personality... I really hope this guy takes it all!

And I'm not saying I hope he takes it all because of the picture I just found too.... Is that from a little play called Beauty & the Beast?  And is Beauty & the Beast like my favorite thing EVER?  No - it doesnt influence me at all... 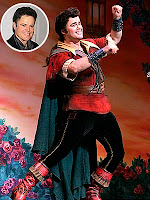 Louie & Chelsea.  Oh yeah... these two are into each other... if they're not - it aint because he doesnt like her.  Did you see how he looked her her?  Isnt young love the cutest? .... I think that Louie's dancing increases when his hair is slicked back.  Maybe he's some sort of Samson with that shaggy do!  But it was slicked back - & he had to grab Chelsea alot - so it was probably the best dance he did.  It wasnt Donnie Osmond level... but it was good for Louie!

Melissa & Mark.  Mark is one of the Flu Boys... one of the pros who the Flu has hit!  So I've been on Flu Fear here in Indiana... I guess the Flu Bug has crept into the dancing studio!  I love that Anna came in & filled in for Mark & her advice - I shall make my life motto now - "Keep the girls up"... huh?  I'm loving the dancing technique advice tonight - first, nickels in the bum & talk of keeping boobs up high?  well - for me, the advice didnt work for her.  I didnt think she really deserved a 10 last week either but who am I?  I am worried for Mark - I think his fever went to his feet - they were red like they were on BURNING UP!!! 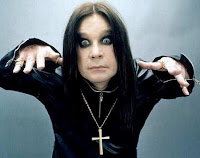 Joanna & Derek.... Maxim.  Our cute little blond dancer shouldnt have danced last week without his shirt - he came down with some MASSIVE flu with fevers of 104!  Poor Derek.  But Max is there to save the day.  (I bet Karina was like DANG IT - He's back!)... Oh snap... there was screws ups with a stumble!  And if anyone saw Joanna on "Superstars" - she's good at blaming others for mistakes.  She's good at throwing curse words at her partners that screw up... watch out Max... Hold UP!!! She just blamed Max... told you... THAT is exactly why I didnt like this girl from the beginning...

GROUP DANCE!!!   We got to go back old school... as soon as I saw Donnie, I said, "Its like my doll!"... I loved that they all made fun of Donnie because he was back in his time era!  Those were some horrible wigs & some UGLY costumes... but it was the 70's!  I love these group dances because you can see they are just having fun... & in the end - Mya & Donnie stood out once again... I'm ready to go find some polyster though & tell Ricky to pull out our rolling skates! 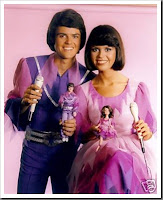 Looking forward to the results show tomorrow - a tribute to Michael Jackson... should be amazing!