I tried... & I saw "TRIED" because our Australian Shepherd, Sydney watches TV.  I'm not even joking!  And when she watches, if she sees an animal of ANY KIND, she must bark.  She'll even run to look around the TV thinking the animal is going to come out of it. 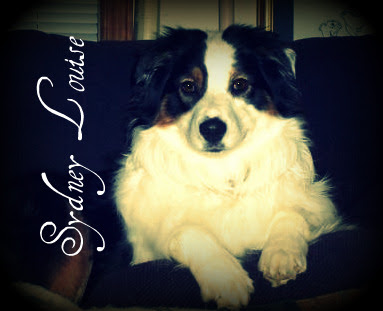 Sydney... she's such a cool dog.  I think Australian Shepherds are the smartest dogs in the world... such good listeners ... smarter then some people I know.
We got Syd from a breeder.  We didnt intend to get one from a breeder - just saw an ad in the paper for an Aussie & we went to check her out.  Well, we got there & were instructed to take our shoes off at the door, had to be sanitized from head to toe in case we were around anything that could be passed on to other dogs, had to stay in one small area of a room where the dogs would be brought out & presented to us to check.

We just wanted a puppy... not intending for all this...

Then they brought out this little bundle of fur... Ricky & I instantly fell in love...

They told us, "You can have a great deal on her - we dont want her - she's useless to us"

Yep - she had a small white spot on her ear & in the world of show dogs, it wouldnt fly.  It would cause her to lose every time.  Both her mom & dad were blue ribbon winners & they were so sad that this "SCREW UP" had to happen (their words - not ours)...

Well, we couldnt pay fast enough & we grabbed our new fur-baby & off we went.

We always think of the life Sydney would have had if she were "perfect"... she'd live in cages, being manicured & groomed & taken on trips for competitions.  I'm not saying anything is wrong with that - in the least... but I just think Sydney would have preferred to be the dog that gets dirty playing with other dogs - gets to roll in grass when she wants - gets to sleep on a real person's bed, snuggled in between her mommy & daddy... (yes, she knows the word "mommy" & "daddy")

I'm also thankful that God sees me as better then a "screw up" .... even when others see things that are messed up in my life... or anyone's life... God sees so much more.  Still loves me... gives me a pretty good life where I get to enjoy every day...even when I'm not perfect.

Be encouraged today that God sees so much more then your imperfections today....