So... remember when I went to the Emergency Room 2 weeks ago for pain in my side?

& I did have a doctor's appointment, but it wasn't until December 19th.  Last week, I couldn't stand it anymore. I think it was just as mental as it was physical pain.  So I called my doctor's office & asked if there were any cancellations or any way they could get me in earlier.

They told me they just got a new doctor in the practice 2 weeks ago & if I wanted to see her, I could get in that day.  Let's do it. I'm not picky.  (We know that's a lie, but we'll go with it for now)

First, let it be known - as a confessed germaphobe, I dreaded going to a doctor's office during cold & flu season.  I am thankful that my doctor doesn't ever over book patients - which I guess is why it takes 3 weeks to get in to see her.  There was only 1 other person in the room & I scoped her out to make sure she wasn't horribly sick.  She seemed to just be there for a check up - all the nurses knew her.  She was an older lady.  My guard is up in a doctor's office....but know that I still walk in with hand sanitizer in my pocket, & I have my own pen in hand so I don't have to use theirs when filling out paper work.

There's your health tip of the day... always carry your own pen.

I was a nervous wreck waiting for the doctor to come in, which was evident by my blood pressure that was like 144/85... my normal blood pressure is like 105/50 - so I was pretty much at stroke level for me.

She came in & I told her about my side pain & how it was still there.

We ran through all the questions... & once again, it freaked me out because everything she was asking was about liver and / or pancreas.

I told her she was freaking me out... let's not take my blood pressure again or it may pop.

The whole time we're talking, I would have to cough.  She asked me if I had been sick with a cold or cough.

Well, the OCD person I am when it comes to health, I have in my Kate Spade Planner a place that I created for a health journal & looking back, yes, I did have a sinus thing the week before my pain started... & yes, I was coughing like a choking animal.  I think I even mentioned that on here before - my cough was awful... & it just wouldn't go away.  I still to this day have a little bit of a dry cough happening.

Side note - if you're going to be an OCD freak, at least do it in style with a Kate Spade Planner...


The doctor then laid me on my back & felt around.... DANNNNGGGGGGG!!!!

She brought me off the table pushing on my ribs... like the ER doctor did.

She told me it indeed did seem like a muscle skeletal thing like the ER doctor said it was.   This time, I made her explain that to me.... because the ER doc told me, "Its muscle skeletal... bye"... & I was too doped up on morphine to ask what that meant.

She said that at first she thought it was pleurisy the way it hurt... but its right under my lungs ... its those muscles that are attached to my ribs.  That means that every time I breath, my ribs contract & expand (hello 5th grade health class) & those muscles are attached to them, moving every time.  Because of that, she said it will take longer to heal up.  She gave me the same idea of a sprained ankle.  If you walk on it, it takes longer to heal up because you have to use it.  This is what is happening with my side.

Onto a strong anti-inflammatory I go... which is a whole other story.  I just can't tolerate medicine & have been on it for 5 days & I'm not sure how much more I can take... ugh... 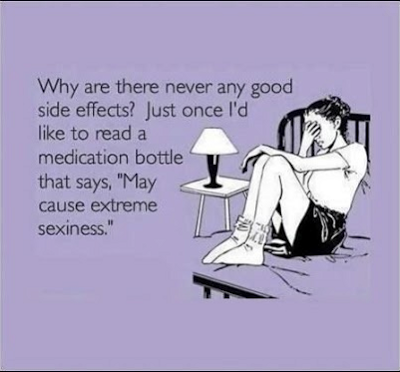 but since I was there, I asked her to go over my lab results from the ER since I learned nothing there.  If I'm going to owe a few thousand dollars for getting tests done there, I want to know what they all meant.

That sweet doctor took the time to get it all & went through everything.  & I was so relieved.  She told me that my pancreas levels looked great, that my blood looked a little anemic (always has - always will) & that my liver enzymes were wonderfully low.  She even said that people that have extra fat around their middle (cough cough) typically have a fatty liver & that she was impressed that my liver didn't even show signs of that...

I told her that with family history of pancreas problems & fear of liver problems, I felt like hearing all of this was a miracle... & I actually started tearing up.  I told the doctor I just wanted to hug her.   Bless her heart - she took off her stethoscope & gave me the biggest hug....

I now want her to be my doctor all the time.  A hugging doctor that takes the time to sit & talk with you?... I just feel like God had me get moved to her for a reason...

On a side note... she did tell me that she couldn't believe the increase in pancreas cancer.  She said she used to see maybe 1 a year, but now its more  like 1 a month.  Her words were, "Someone needs to find out what is causing this to rise.  Something is happening to cause such an extreme increase in this cancer"

.... OH MERCY... I'm now on the hunt for good cleansing foods for the pancreas & will be eating them every day....

My side does still hurt off & on.  She told me to take these anti-inflammatories for 2 weeks & if its not any better, come back & they'll do an ultrasound.... so lift a prayer that by New Years, I'll be pain free...


Do you like your doctor?
Ever pulled a muscle coughing?
Can you tolerate medicine?