The weekend that started off a new year the cutest way possible!!!

Year end is crazy at our work & I was exhausted on Thursday.  I logged on early, & worked late & thought there was no way that I would make it till midnight.

I even put on comfy jammies & settled in bed & thought, good riddance 2020 .... but then stumbled upon the new Netflix show called Death to 2020.

I ended up watching that & laughed so hard... it's awesome.  A great way to look back at a horrible year & at least get some perspective in knowing you're not alone in thinking its awful & laughing through it all. 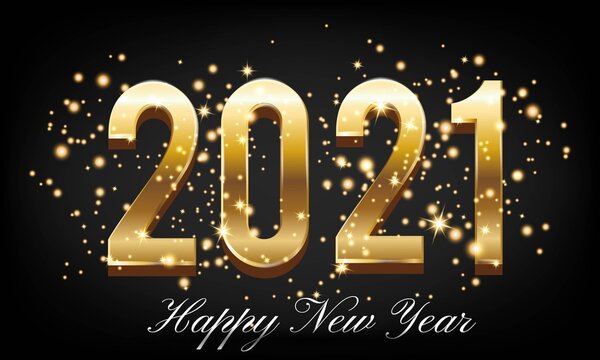 Then... I couldnt go to sleep.  I mean, nothing is ever easy.  But we had no work on Friday so hey, more episodes of Gilmore Girls.

I got up early on Friday & was playing in my planner & took it easy, relaxing - even started off new years health resolutions by pushing them down the drain when me & The Hubs had coffee & banana cream pie for breakfast.  Start this year off right. 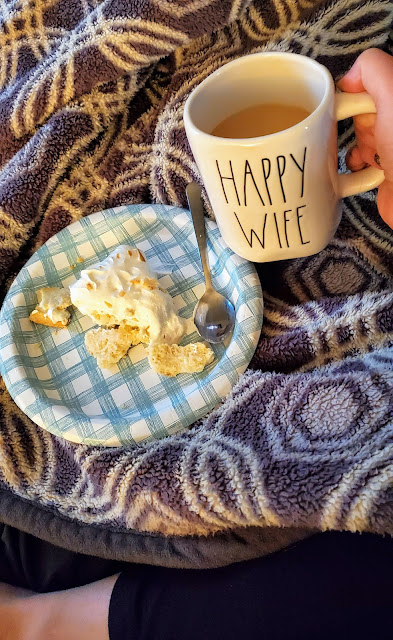 It wasn't too long into the afternoon when I got a message from my sister in law telling me she tagged me in an Facebook post..... there was an Australian Shepherd pup for sale.  Down in the country where The Hub's family is from.

We know from experience that these puppies go so fast... & you all know we've had some puppy fever lately anyways.

So next thing you know, we're jumping in the car & driving over 2 hours to see this puppy.

It was so funny because it was rainy & cloudy & chilly (around 52 degrees) when we left home. About half way down, we both were like, WHEW - its warm. I thought I was having a hot flash - but we looked & the temp was 74 degrees down there & sunny!!! It was such a nice day.  Worked out well for our drive.

We were in some back woods of Kentucky & our GPS took us to a cemetery that was about 300 years old & ran over ... & we couldnt find where we needed to be.  We tried calling the guy, texting him - no answer.  After sitting in this cemetery & waiting to get jumped & killed by 300 year old ghosts, we drove down the road a little & found a house & Ricky got out & went to the door.  The man was so nice but said he had no idea where that address was.... great.

We were ready to just chalk it up to a nice day venture drive sort of day & turned around to come home.  As we were going down the road, I looked up & saw 3 adult Australian Shepherds laying in a drive way.... SCREEAACHHHH - hit the brakes.  There happened to be a man out in his drive & we rolled down the window & asked if he was the guy we were looking for - nope, but he was his neighbor!!!! We found them.

We got out of the car & I saw the 2 puppies they had immediately.  They had this little black & white guy & they also had a little red tri little girl with green eyes. She was beautiful.  But they let them both out for us to check out & MAN OH MAN - that red girl, she was a BULLLLLY - she was jumping all over this little guy & growling & it just seemed a little more than just playing. She even bit Ricky's hand & he was bleeding so bad.  You could tell she was an aggressor - would want to be an alpha.  Ernie is by far the biggest alpha dog we've ever had & I just knew it would be a bad mix.  She was gorgeous & if we went just by looks, we would have gotten this pup.  But my heart just went to the little guy - & he kept running from the red girl to Ricky & hiding in between his legs & he was sold then too.

Here's the pic of him in our car as we're pulling out of the drive way. 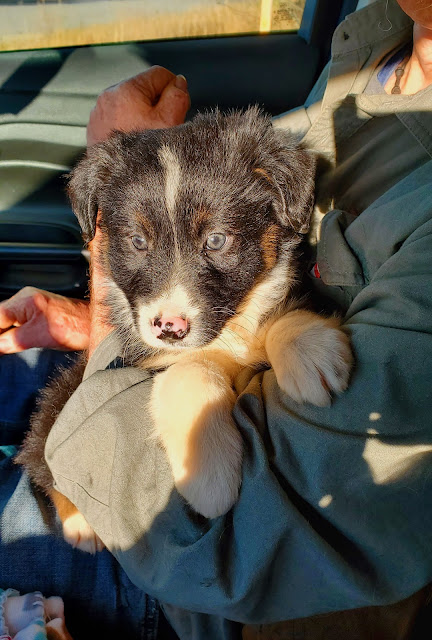 We still had a 2+ hour drive home & we were worried how he would do.  Well, he snuggled up against Ricky & slept so well.  Would wake up every now & then & just kiss him in the face & go back to sleep.

He did wake up one time & got a little whiney & we pulled over & found a spot where he could potty & he did, & then slept the rest of the way home. 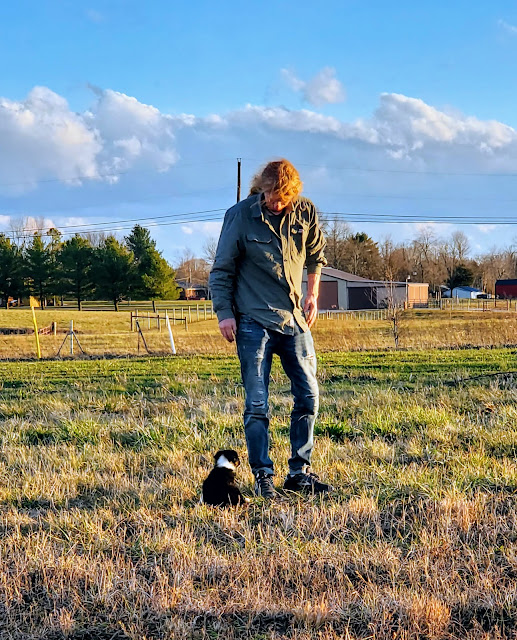 Then the introductions to our dogs.

They are still out on this whole thing.

Zoe, she saw him & as old as she is & how she doesnt care about anything - well, she perked up & ran across the floor (ran as fast as you can as a crippled 15 year old dog) & sniffed him out - & then ran to Ricky & put her paw on him to pick her up... I know she was like, "What are you doing to me? AGAIN! ANOTHER PUPPY?"

Harvey - he's Harvey - he is laid back - doesnt care much.  Watches the pup & lets him do whatever he wants. That's  how he was with Ernie too.

& that's why Ernie is how he is.  The dominating one ... & he wasn't too happy.  He's very leery.  He gets very antsy & snippy when the pup is around toys or even worse, Ricky or I.  We're being very cautious on the meeting & hoping Ernie adapts.  The pup just wants to play with them & hang with them so badly.  Ernie had hurt his feelings snipping at him.  I'm hoping as the pup grows & he starts playing with Ernie, they'll be best friends.

We got the puppy knowing Harvey is going to be 8 this year & Ernie is still energetic at 3 years old - we were wanting to take some of the pressure off of Harvey.  Ernie is like, "NO - I like the things as they are".... we'll see how it goes.  Ricky is very anxious with it & I remind him the puppy has been with us 48 hours.  Its gonna take some time.

So the baby's new name... as of NOW, we've decided on Ozzie!  It's been a battle coming up with the name... & as of Sunday night, Ricky is now saying he's not sure about it.  So its probable it will change.  Sigh.... 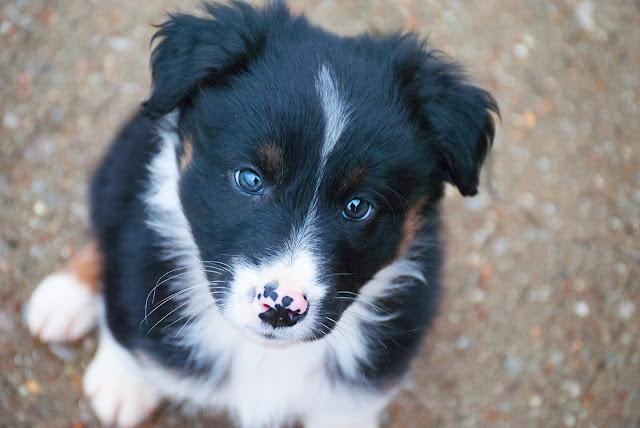 Ricky is set on calling him Otto.  He actually wants that name with Madic as the middle name... so the name will be Otto Madic Vincent... I'll give you a minute to hear that name.

We sort of came to agreement with Ozzie because I was trying to think of names that went with Harvey Dent (which is a Batman character) - so I said, there's Oswald Cobbelpot - he's the penguin - black & white. I think its pretty great.... & then I said Ozzie for short. THEN HOLD UP - Ozzie - Australian Shepherd. It just fits perfectly right - BAM - a name!  I even thought of the middle name as Chesterfield - which is the Penguin's middle name too..  Ozzie Chesterfield Vincent.  But that's a mouthful.  With Madic on the mind, I had Maddox keep coming up - so we settled on Ozzie Maddox Vincent.

But since we named him that - Ricky still keeps calling him Otto. STOPPPPPP.... & then Ricky said, "I just am not feeling Ozzie.  Geez.  .... so stay tuned... this is like a Netflix show waiting for the next episode to load.

The rest of the weekend - just puppy watching.  All the trips out to the bathroom.  All the watching that the big dogs (Ernie) doesnt lose his mind on the little one.  All the earplugs in my ears with all the whining & crying when he's in his kennel (more like a play pen area) during the night. 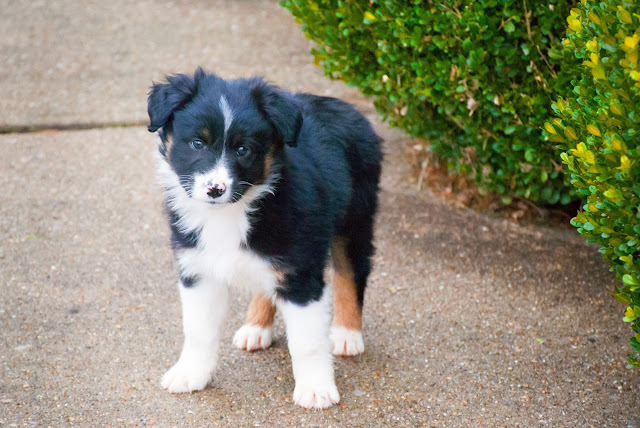 Having a puppy is hard work. It's like childbirth I guess - you forget how hard it is. How  much work goes into it.  There's sleepless nights.  There's a dozen potty trips - an hour... there's a of NO'S & lots of cuts & baby teeth bite marks piercing the skin.    It's exhausting.  But I know once Ozzie (pending) gets to the vet & gets his all clear in his health & get wormed (did I mention he has horrible worms - EWWW) & it can be trusted more with him hanging with the big dogs - I know they'll train him up right.

It's just going to take time.  & at least I'm still working from home so hopefully that will help too - so he doesnt have to sit in a kennel 10-11 hours a day.

I only left my house on Saturday to get my mammogram done & then stopped to pick up more puppy chew toys...

& then Saturday night, we binged Season 3 of Cobra Kai.  Truly, we sat on the couch watching the dogs & watched all 10 episodes.  LOVED IT!!!!! So excited to see season 4 will be coming.  I'm going to re-watch it all over again.

Sunday, I stayed in jammies all day only to change to go over & love on some horses.

Talk about a social distance weekend.  The only other human I saw on Saturday & Sunday was Ricky.  & some cute dogs.

& now, after all the Netflix, I'm almost ready to go ahead & change Ozzie's name to Johny or Larusso...  & thinking I need to change Ernie's name to Kreese. NO MERCY!

Did you do anything for New Years?

Do you watch Cobra Kai?

OK - give me votes on dog names... Ozzie?  Otto?  Larusso? Any other submissions are welcome