Friday... & thankful this Friday is a lot calmer then last Friday.  Cant believe one week ago is when the tornados came through... seems longer...

We have trees in bloom here!!! Spring is coming!!!  I dont think its supposed to be this early, but that's OK - I'm happy about it.

Not to happy about the bugs we're already seeing.  We had our first fly of the year flying around our kitchen.  In our house though, a fly is a perfect toy because the dogs will chase it down until it becomes a tasty treat for one of them.

I may be vegetarian, my dogs, not so much.

That Weight Watchers commercial with Jennifer Hudson singing with herself (the clip from American Idol where she wore that dress that her neighbor made for her) - its just creepy.  Dont know why but everytime it comes on, I make a weird face while watching it...

This is my niece Sophia's paper from school... Look where the teacher said they're having a quiz... she wrote NO! haha! My brother asked her why she wrote that & she said she didnt want a quiz....

Who does? ... she may go into politics when she grows up.  Speaking up for the ones who wont speak up. :) 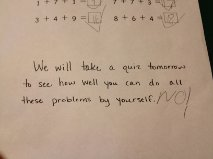 but it feels so funny because its an ACTUAL book.  I'm reviewing it for Amazon.  But it just shows how addicted I am to my Kindle now.

..You know you're lazy when you complain about having to turn an actual page...

SPAT OF THE WEEK:  ... just wait for it... - so Monday, I was busy & then had to run to the grocery.  I called Ricky & asked him if I could just pick up Penn Station instead of cooking when I got home.  He had no problem with that.  So I'm out loading up my car with the groceries & all of a sudden, a car comes up behind me - I mean, LITERALLY behind me - like touching me & HONKS!!!! It was Ricky... I seriously JUMPED, throwing the bag of groceries - it scared me THAT bad!!!

so we go into Penn Station & decide to eat there.  They lost our order so we were in there for quite awhile.  Probably about 30 minutes, at least.  As we're leaving to go home, Ricky cant find his keys.

We search for the keys where we were sitting.  Nope, not there.
Then it hit Ricky... he runs out to his car.
IT'S RUNNING!!!!!!!!!!!!!!!!!!!
He left his car running the whole time we were inside.  With the DOOR UNLOCKED!!!!
Someone could have easily just got in the car & drove off.
And the car wasnt in our view while we ate.
I couldnt believe he did that.
While not much of a "spat" happened - we actually laughed about it - this is just a great place for me to "tattle" on Ricky - so there you go.

Here's the latest picture of my grandbabies... dont they look SO BIG?????
And so darn cute!!!! 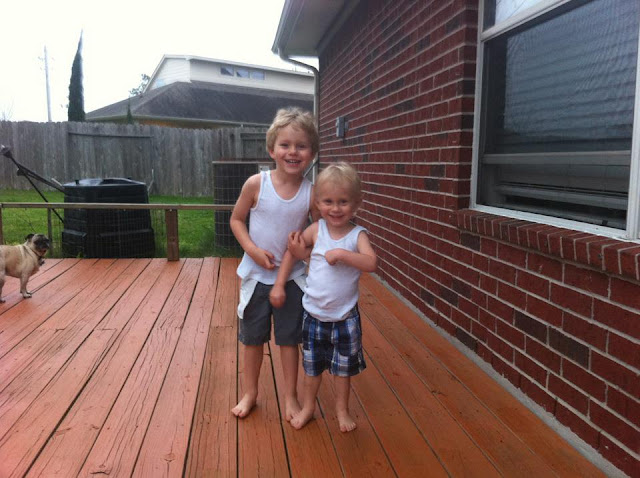 I left my cell phone at home yesterday & I felt like I was missing a body part all day long.  That's kinda messed up really...

Anyone watching GCB?  I love Kristin Chenoweth. Everything about her! Hope the series makes it just because of her. (& Annie Potts)

So they said that Coke & Pepsi had to change their carmel coloring or put a "Cancer Warning" on their bottles/cans... WHOOOO... that's scary!