Another year of Believe...

I can't BELIEVE how many times I've got to go on this trip.
Its always so much fun getting to hang out with Jr. High kids as they get to experience God in a fun, exciting way.

This year, we headed up to Anderson, Indiana - which is now officially the highest North I've ever been
... & which says how sad my travel life is...

Its funny because we usually go in February to Cincinnati & its ALWAYS cold so we thought, great, we're going in April - its going to be warm.  We wont have to worry about coats & jackets & warm stuff.
WRONG!
It was so dang cold!
Wouldn't ya know.

But cold doesnt take away our excitement & joy.
We loaded up the vans & headed out

Here's my van load I got to truck along with.  The all-girl van.
The other van had 7 boys & 3 girls & when we stopped, one of the girls told me, 'The boys are already funking up the van"
Thank you Lord I had all girls 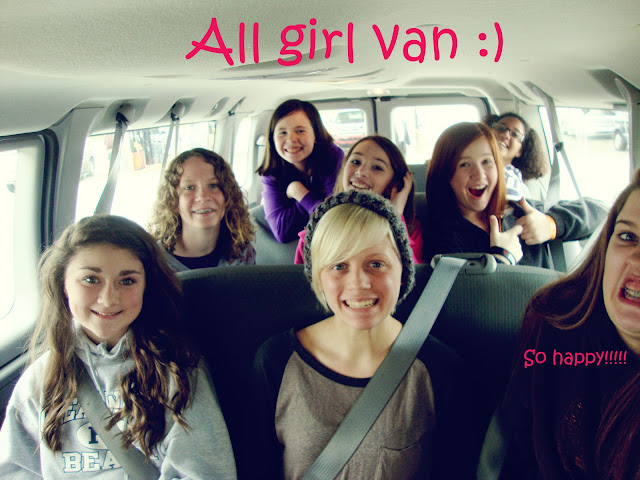 The trip was 3 hours but it really didnt seem that long.
I guess when you're singing & eating snacks, that always makes a trip more enjoyable.

We got to our hotel - which was the BOMB-DIGGITY!!!
(& I didnt get pictures of before we bombarded it)
And then headed off to dinner at Taco Bell 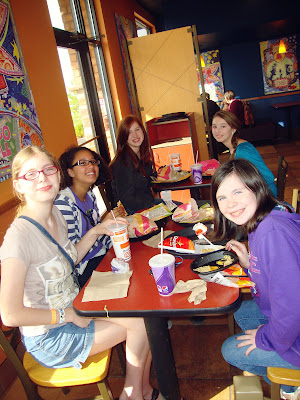 We head to the conference.
Now, we're used to HUGE conferences at Believe - ARENA SIZE
We pull up to this small building on a campus & me & some other leaders just looked at each other & was like, "uh oh"

I mean, that's kind of the point of enjoying it....
being in a huge atmosphere
the energy of it
so we were a tad worried going in
but we all agreed that our jobs as leaders was to make sure the kids had a great time & enjoyed themselves
(you'll hear more about this topic later on)

The lobby was very small - just imagine a lobby of a auditorium at a college
- that's what this was
But this picture is under the lights there.
Isnt it cool?
My artistic moment of the weekend 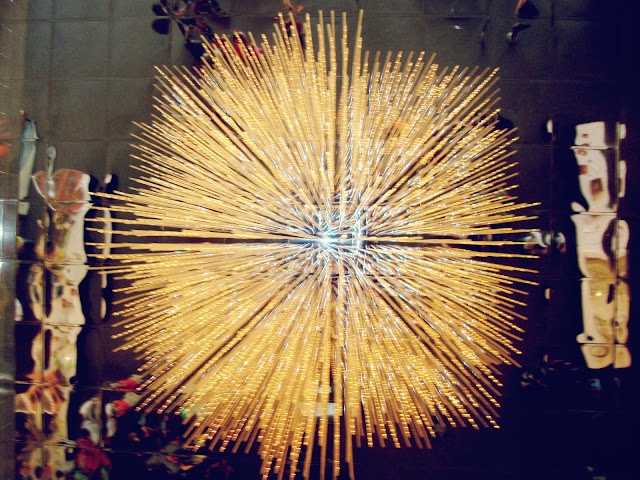 We get in the auditorium & see it probably holds a few hundred seats
& we were there early
so what are we do?

I got a group of people together & asked if they watched "Ellen" & the dance dare that she has people do...
its where you sneak up behind people & dance without them knowing it

I started us off
I am a leader after all :)
It was the funniest thing
But then everyone wanted to be involved
Before you know it - we were Dance Daring everywhere

And people who were watching us from other churches were cracking up -
LOVING IT
The youth group leaders in front of us said, "I can watch this all night long - its the funniest thing I've ever seen"
& then without her knowing it, we dance dared her :)

But then time for the conference to start.

It was so interesting because it showed the history of where the Bible came from - how God's word started out with the Ten Commandments, grew through time, how it spread through the Holy Lands, to Rome, to England, to print, & to America...

I usually blank out when it comes to anything historical, but this was pretty cool

I loved the speaker said,
"We keep the Word in our Heart so it can KEEP US when we need it"

And throughout the time, these 2 guys came out to entertain us.
Hurt & Manley
I laughed so hard, I had tears & stomach aches
(could've been the Taco Bell - but I'll say it was the humor) 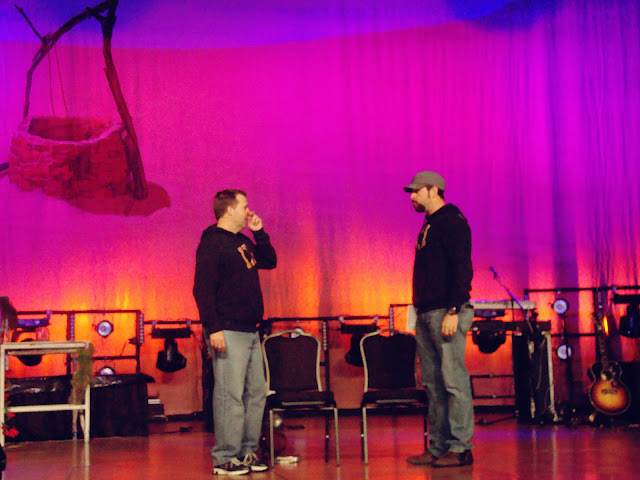 EVERY YEAR
one of the BEST parts of Believe
WORSHIP!!!! 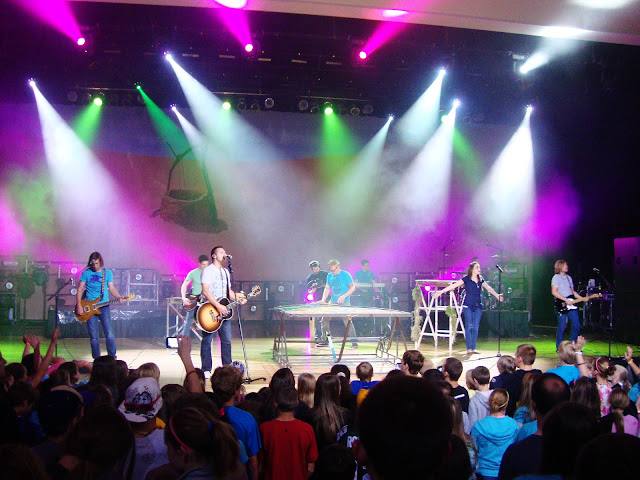 Day 2
Its always a tiring time - lack of sleep
But it was so worth it
The girls had a small group discussion together in one of the rooms
I think we could have talked ALL NIGHT LONG
But we had some great discussion, deep thoughts, great advice, prayers flying
it was amazing
THOSE moments right there make it worth the trade of 'no sleep'

Here's Jordan, resting before we got started on Day 2 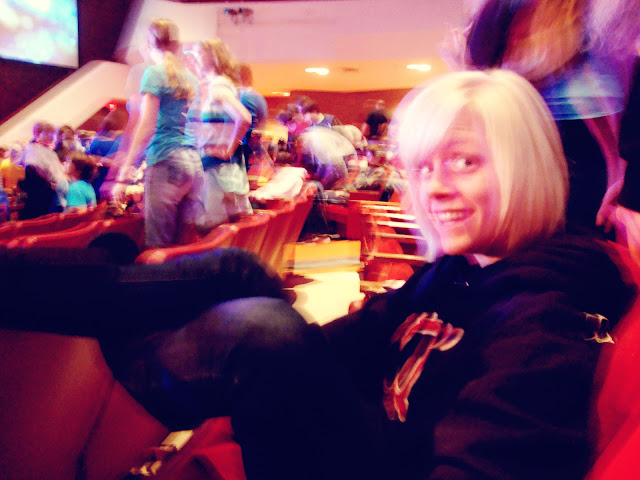 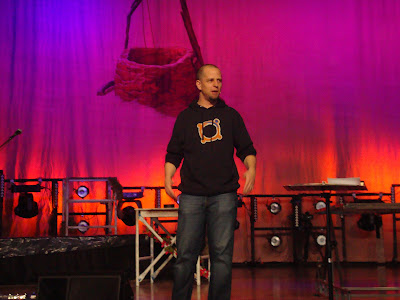 During the 2nd session, the artist Eric Samuel Timm created this 'stained glass' while the worship was going on.
Isnt it beautiful?
This is like his 4th year with Believe & he just brings the 'cool' factor
& the most amazing art you can witness being created in front of your face 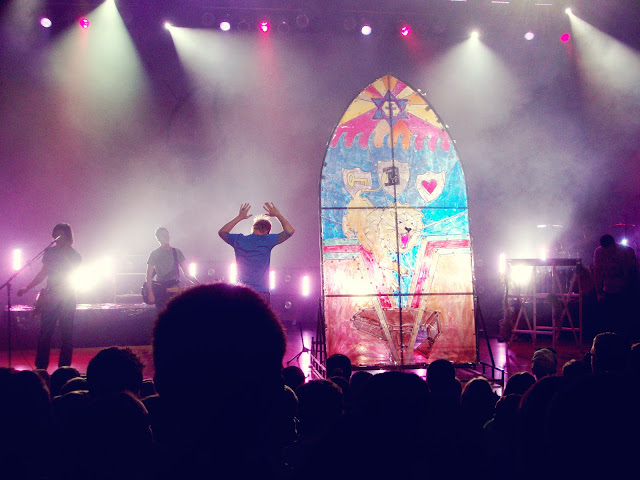 Then at lunch time - they gave us a mission
Be CRAFTY :)
We were to take something out of God's WORD that we will memorize
or that we love & write it on something we found at our lunch location 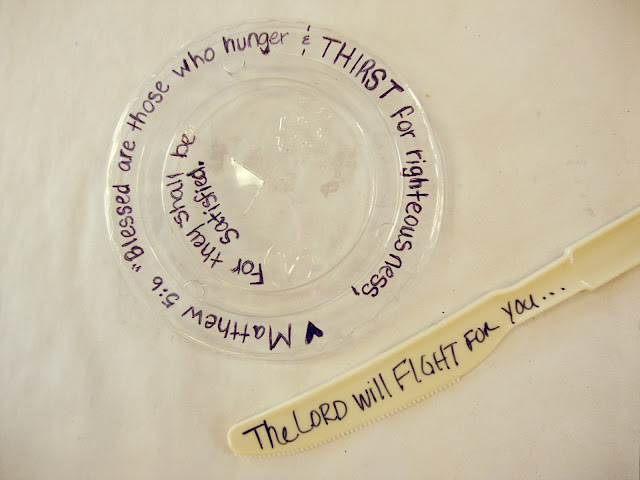 When the final session started, we had to give our things to the Believe volunteers & during worship, they put it on a pulley system & sent everything up front on stage.

As you can see - I was directly under the pulley line.
I seriously got hit in the head by so many dang pizza boxes
Finally, my group scooted down because they were afraid I didnt need anymore brain damage 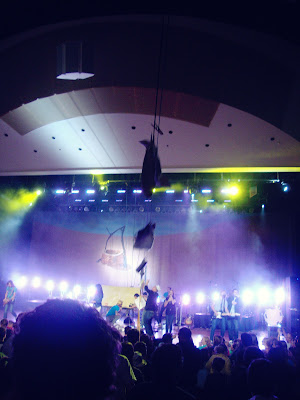 At the end of the session, Eric once again made an amazing piece of art out of our things we used... all of these creations with Gods Words on them pouring into a heart

It was funny too because he was saying some of the stuff that was sent up... there were many napkins, boxes, a few 'hats' from Burger King & Steak & Shake... & even a sock someone sent up ??? haha! 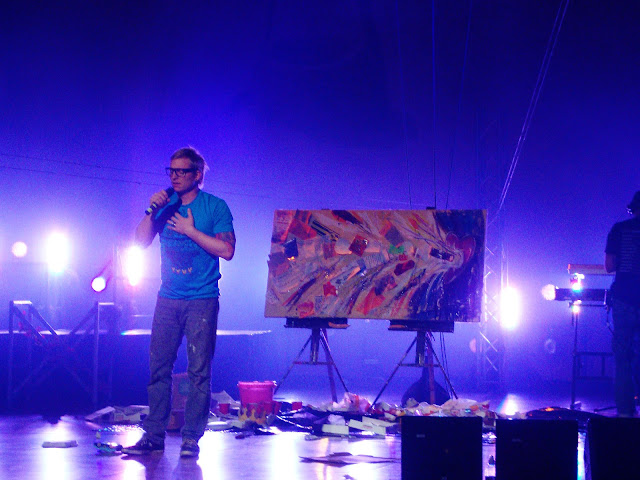 And we asked the kids if they enjoyed this event...
it was different then what we were used to
They LOVED IT!!!!
Even MORE then the other place
They said they loved the closer environment
they got to talk to other kids
Didnt feel so overwhelmed by the big arena & getting lost
There were no lines to the booths to get shirts
The drinks were $1.00 instead of $3.50
Candy was $1.00 instead of $5.00
They were able to get right up on stage during worship
They were able to talk to the speakers easily as they walked around the auditorium

Expectations?
Never have them because God knocks them all down
We were so thrilled the kids enjoyed it
That's all that mattered

Here we are before we head home
The coolest gang of kids around!!!! 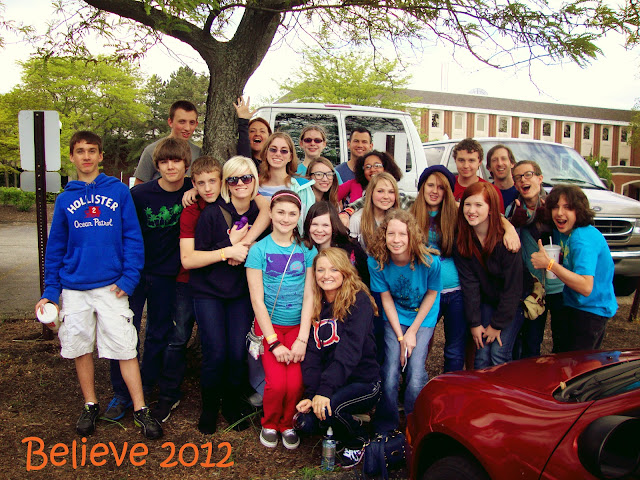 I have hidden your word in my heart
that I might not sin against you
-Psalm 119:11