Its what made my weekend anyways

First, let me say, I so appreciated all your thoughts & comments & I really took them to heart. But just like that sign said that I posted, It hurt worse to stop ...

maybe all your prayers are what pushed me through... I'll explain more as we go along.

Pre-Race:  Woke up & it wasnt raining.  They kept saying that there was a chance of rain & to expect to get wet.  It was still a little cool too & I was worried about the rain on my legs, but stuck with my original outfit I planned on wearing.  And I did end up just wearing my old shoes (that was a debate on my Daily Mile page)... they werent horrible & I didnt want to waste $139 on the shoes I just bought.  If they get too wet, they can warp. I'd be ok if they were a few months old - but not a few weeks.

I also got to try out my running skirt.... & now?  I'll never run in anything BUT a running skirt.  I was in heaven.  Comfortable & easy to run in.  I got this at Target & am seriously going to go there & buy as many as my bank account will let me...


(Before we left the house) 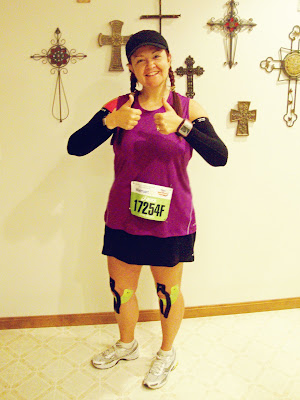 Start Line - Mile 1:  It took me about 10 minutes to get to the actual start line.  That's what happens when there was 18,000 fellow runners.  Congestions.  But I thought it was funny because the song that came on was a song that had the lines, "This is my moment.. my perfect moment" & I just felt like this race was going to be OK.... I felt fantastic through the start through Mile 1.  Even had a pace at 9:30 at one point... WHAT?  ME?  ... yep!

Mile 2-3:  I was nervous this mile because this was the mile, that last year, I got knocked down.  I actually got up on the side walk & walked this part.  I wasnt taking changes.  Got past it & started running again & felt like I already accomplished something! :)

Mile 3-4:  I hit my 5k at the exact pace I ran my 5k in March... I like this part of the race because you get out of the small downtown Louisville streets.  Once you hit Broadway, its like a fresh new race.  Water Stop #2

Mile 4-5:  Got to see my buddy, Corey
who was running the full marathon.  We always seems to find each other, no matter what race it is... His energy just inspires me.  We call him "Superman" for a reason :)

It also was time for a huge DOWN POUR.  There was literally one grey cloud in the sky & it opened up.  Thank God I had on that hat because I was able to put my head down & block it from my face.  Others?  Not so lucky.  It made me nervous too because the old shoes?  They were slippery on the pavement & it slowed me down a bit.

But right when you get to mile the end of mile 4, you take a turn down 4th street & that's where the crowds are cheering.  They make the biggest difference.  There was a girl with a Hunger Games sign that said, "May the odds be ever in your favor" - I gave her the "Hunger Games" 3-finger sign & she laughed.

Mile 5-6:  That cloud went out of the way & the sun was back out.  It stayed out the rest of the race.  So much for a race of rain that they predicted.  But no complaints.

The sweat & the rain had my KT Tape coming off of my knees.  I was a little nervous because I knew it wasnt going to last.  Finally, at the end of mile 5, it was flapping & I knew I had to take it off.  I walked to take it off but then I was afraid of running.  Thought my knee pain would kick in.  But it didnt!!!!  I was so happy... but my inner thigh muscle REALLY got tight.  Maybe I was running different to compensate for my knee?  But I was still feeling pretty great.

Mile 6-7:  Great crowds down the road... lots of pets with their owners... lots of great signs... this is a weird mile though because they take you off the road & around a block.  It's just an odd move.. & the roads there are HORRID.  Lots of cracks & opportunities to break your ankle.  But it was nice because on the turn back onto 4th street, they had Walgreens sponsoring orange slices... that was a nice little energy boost of Vitamin C.

My 10K time?  Exactly like my race I did in March... I was sticking to my usual.

Mile 7-8:  Got to see a woman on the side of the road being arrested... that's always fun.

This is a great part of the race because you make your turn into Churchhill Downs.  My ipod was on a J-Lo song & let me tell you, I was KICKING it on this part of the race.  Probably my fastest mile.  J-Lo will do that to you.

Mile 8-9:  I couldnt take it any longer... my inner thigh was BURNING.  I knew I had to stretch & I dreaded it.  I didnt want to waste one second of time.  So I made a deal with myself - SIXTY SECONDS.  So I got off the path & stretched each thigh for 30 seconds.  I was watching my time the whole time so I didnt go over.  It made all the difference in the world.

This is where you come out of the Downs (which was cool because they were running horses around the track) & you make the turn to go back Downtown... where the finish line is.

Mile 9-10:  I think there were 2 water stops here.  This race is great with keeping everyone hydrated & taken care of. 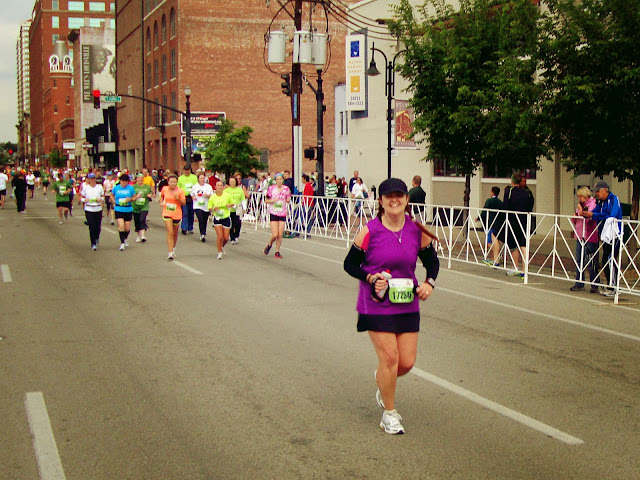 The funny thing, then he was ON the course & the gates were up to block people so he couldnt get out! HAHA!!!!  So I told him he was just going to finish with me.

We ended up rounding the turn - saw the finish line.  I thanked God that it was downhill & I turned it on.

You run across a timer that lets them know your name so they can yell it when you run by... they said, "And there's Rebecca Vincent holding hands with someone" :)

Poor Ricky - it was probably a nightmare to him.  He hates crowds & here we are running down the road with hundreds of people watching us...

Think I cut it close?

But I just kept thinking if I didnt take that minute to stretch, I would have been at 2:58!!!  Exactly like I was envisioning!!!!

& took 7 minutes off my time last year... (I probably would had made it last year too, but with the knocked down thing?  Messed me up) 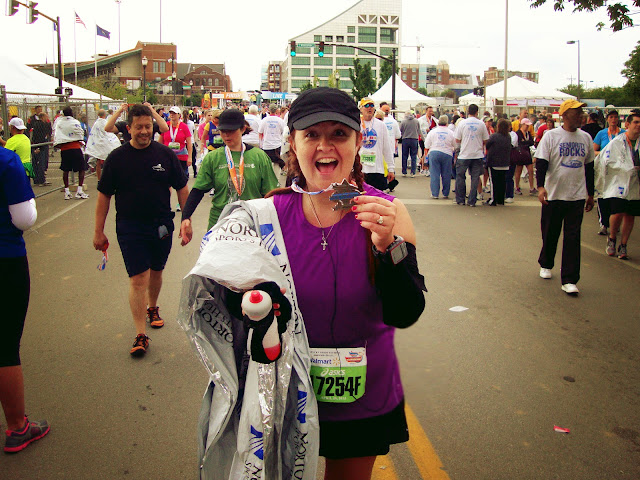 But Ricky even said, 'you looked so strong' - I felt strong.  Even being slow, I felt strong.. & I finished... & it was wonderful.

We sat down so I could stretch for a bit.... I just sat with a smile on my face the whole time.  I felt PRIDE in myself... 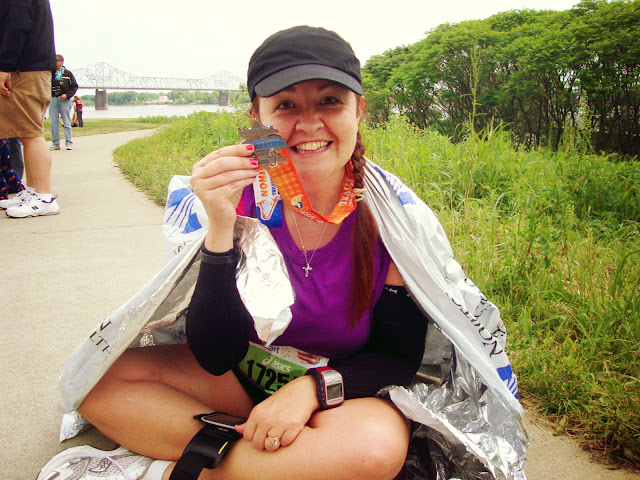 So then Ricky took me to Jimmy Johns for a big ole veggie sandwich (I was craving the bread... give me CARBS) & then I came home & headed to the showers...

I didnt want to take my medal off though...

But I introduced it to my other medals... & more specifically, my other Kentucky Derby MiniMarathon Medals... & told them they'd be seeing another one next year 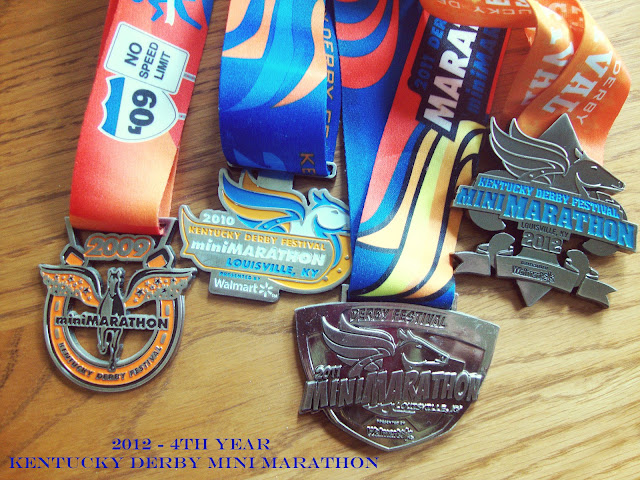 "Have I not commanded you?
Be STRONG & COURAGEOUS.
Do not be afraid. Do not be discouraged.
For the Lord your God is with you wherever you go"
-Joshua 1:9

(This was my verse that got me through... I kept repeating it all the way & truly found strength & courage within my self because of it)