Weekend Round up... with a race recap

*  I thought FOR SURE I was gonna win the Mega Million.  That's a let down... back to life of working for a living & owing bills...

* I've got news that a dear friend of Ricky's passed away earlier in the week.  He was devestated.  Especially because no one got ahold of him... even though these people KNEW how to get in touch with him.  How cruel is that?  ... The world lost a sweet, precious soul.

*  Stormy night... I love falling asleep to thunder & lightning... no, really!  As long as no threat of bad storms or damage, the thunder sound & bright room lighting up just makes me want to cozy up & sleep.

*  I left early, thinking I had plenty of time to get to the start line. NOPE!  Traffic was backed up on the expressway, making me get off & taking back roads.  THEN, get to where I normally park & its blocked off.  What do I do now?  I just followed some cars & parked where they were.  Bad thing?  It was like 4 miles away from the start line. GREAT!!!! ... I literally was walking up to the corrals when the horn went off.  So much for leaving early

*  It was HUMID as all get out... the sun never came out - THANK GOODNESS!

*  Ricky had me wear a blue shirt for the race (UK/UL game a few hours later) - the only one I had was a tshirt, v-neck... by the end of the race, the sweat from the humidity had the shirt so stretched out.  I looked like something off of "Flashdance" - it hung off my shoulder for 85% of the race.

* In the HILLS of the park, it always makes me want to cry when I see people in wheelchairs taking on this challenge.  Not the "racing" kind of wheelchairs, but normal, every day wheelchairs.  And these hills are STEEP... & you see that with each spin of the wheels, their arms are tight.  Talk about INSPIRING???? ... & I complain about burning feet? ....Hello perspective....

*  I did the "dedication miles" - keeing prayers lifted for certain people during each mile... it really made the mile go by fast.  Mile 5 especially - that was dedicated to the youth group.  I looked up & mile 6 marker was ahead & I was like, What the heck happened there? ... not complaining about it though

*  I ate a part of a Lara Bar at mile 6 & WOW... it was like TURBO BOOST... make me feel so energized.  So much better then a gel & jellybeans... I know what I'll be using for the half marathon now.  (I did have PowerAde in my water bottle as well for sodium)

I kept seeing this young girl running with her brother & dad.  She would run ahead & then slow down waiting for them... well, at one point, after the Lara Bar, I was feeling great... got a good pace going... she kinda stuck with me.

So I dont know how we got to talking... but we did.  And mercy... what a blessing.    I asked her if she was running the mini - she said she couldnt afford it because she was saving for a mission trip.  HELLO GOD!  I knew right there that we were meant to talk.

The rest of the run, we stuck together.  I told her she didnt have to stick with an 'old lady' - she said she enjoyed talking with me.

She was telling me about herself - she's 15 - homeschooled - loves books, especially Agatha Christie mysteries - runs with her family (her mom & younger sister are SERIOUS runners) - & she was telling me of the call on her life to be a missionary.  She said, "I knew at 2 yrs old that's what I wanted to do... its always been on my heart" ... She's so excited about this mission trip... giving up all her birthday money (she just turned 15 two weeks ago... so young).  She was telling me how she's so nervous because she feels so overwhelmed about where she wants to go after she graduates - she knows she's going somewhere to share the word of God, but she knows so many places need the word - so how do you pick?  I told her that I guaranteed that God would lay on her heart exactly where she needed to go when the time was right... she just beamed & said that's what she's praying will happen.  I assured her that with that special heart she had, no way God was going to let her go to the wrong place :)

She also shared with me her story... see, I noticed them earlier because her feet turned in while running.  I was so nervous she was going to trip over herself.  She was born this way & she was telling me that at 18, she'll be having surgery to repair it - have her hips broke & set correctly, but they have to wait until she's 'fully grown'... she had to take ballet as a young girl to learn to turn her feet out more so she WOULDNT trip over herself.  But she was probably 5'6 & she said, 'I'm not ballerina' so she didnt stick with it... but that she could RUN?  I told her she had a testimony on top of everything else on beating the odds & defeating struggles.  I think she liked that...

She totally pushed me too... we ran the last 4 miles together & we kept a steady pace.  I would have probably slowed WAY down if it wasnt for her... so I thanked her for keeping me going.  On the final turn, I told her to go kill it, take off & get a better time... she kept saying, "are you sure?" - I assured her I wanted her to do great... & she left me just at the last .10th mile... & immediately turned at the finish line & cheered me on & gave me a big high five when I crossed.

*  and I didnt take any race day pictures... but here's my "daily picture"... AFTER my shower.  I was a dripping mess... a shower never feels so good then after a race! 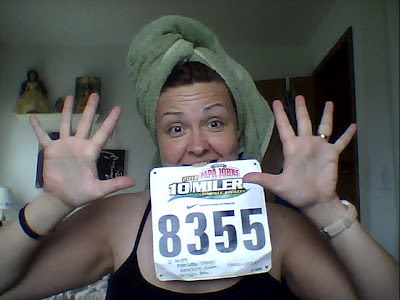 * Ricky & I went out shopping & I was quite happy I could walk around after a big race... no pain or soreness... I've come a long way from my first days of running

* I've become addicted to having cashews in my salads

* UK/UL game... Ricky made sure my phone was off so I couldnt see any updates - made sure I wasnt watching the game - kept coming up & seeing if I was peeking... & he'd keep running up every commercial to give me the details of what was happening... I thought for sure he was going to have a heart attack...

*  UK WON!!!!! .... I think it wasnt so much that my "jinx curse" didnt take place, but more that the win happened because of these 2 cuties cheering on the Wildcats.  Julie is raising these boys right!!! 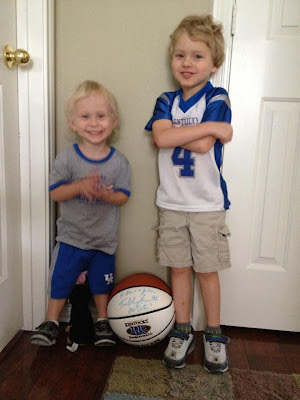 * while reading, sitting outside, I got sun burned... I took a picture but didnt have time to upload it... I have a cross on my chest from my necklace... my necklace must have moved a bit because if you look good enough, I actually have 2 white crosses on my red chest... I said I need to lay out with my necklace one more spot over so I can say its my Easter body decoration.

* made it through the day with NO April Fool's Day pranks pulled on me... YES!  I loathe April Fool's pranks...

Hope everyone has a fantastic week!!!