I never knew running could be so fun!

I had to recap this race.

It started off COLD.  Its been warm for pretty much all the other races - but this morning? BRRR!!!!  And I didnt know where I was going... AND I had to drop Ricky off before to pick up his car so he could go to work.  The morning wasnt starting off good.

It was at Cherokee Park... I've only been there once - & that was running THROUGH is during the half marathon I did in November.  I had no clue where I was going.

Luckily, I found the park & just followed cars.  This park is HUGE & has different roads & turnoffs.... I'm just glad I found the right cars to follow.

The idea of this run was you had on a belt with 3 flags which represented your "brains" & the zombies would grab at them.  You wanted to finish with at least ONE...

& the bad thing?  One of my 'brains' was messed up - it didnt have a loop to put on my belt.  This wasnt starting off as a good omen.  They did replace my 'brain' & give me one that worked... I needed all the help I could get...

The "zombie master" had already told me that these zombies werent playing around... they would do whatever it took to get everyone's flags... I'd soon find out how true that statement was.

So my buddy & the youth pastor at my church, Scott, joined me... it was his first 5k.  I told him not to think that every 5k has people chasing you! :)

Here we are getting ready to take off... & me trying to figure out where its best to put my 'brains'.... all together?  Seperated?  Behind you?  In front?  I settled for a wide variety... 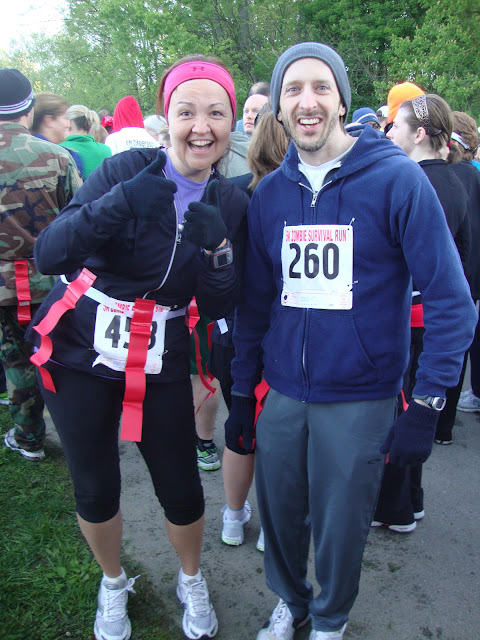 It was right from the begining & the zombies were coming out...

These zombies were EVERYWHERE!!!!

The tricky part - some of them were dressed as runners & would be running in front of you & you wouldnt think anything of it & then they turned around & get everyone around them.  Zombies are SNEAKY!!!!!!

Here's another video.... there were smaller childer & they were FREAKED OUT!  This little girl was crying... so I tried to give her a pep talk, until the zombies came after me AGAIN!!!!

Note to self - if a real zombie attack happens, dont worry about filming it

They had bridges that were COVERED with zombies & that was a challenge to get through... but hilarious... & FUN!

It would wind you so much to have to sprint past these people...

The more you got to the end & they saw you still had flags?  They'd REALLY come after you.  Scott did so well... he was making to the end & had 2 flags left.

And then the funniest moment... Scott said, "So are runners like this in every race?" - he was talking about the community of runners - how they supported each other - helped each other out with the zombies - cheering each other on.  I told him that runners are like that EVERY TIME... its the most supportive group of people with the same goal.  Scott said he's totally going to use that for an example in a youth lesson...

Scott looked at me & said, "So much for support among runners"... I told him when your life is on the line, it breaks all support rules...

we laughed for the rest of the race over that.

It was like my friend Corey said - Sensory overload!!!!

They were everywhere!!!!  And determined to get everyone!  Scott lost his last 2 flags there...

& my flag that was knotted?  This zombie chic totally grabbed me & held me down till she got it!!!!! 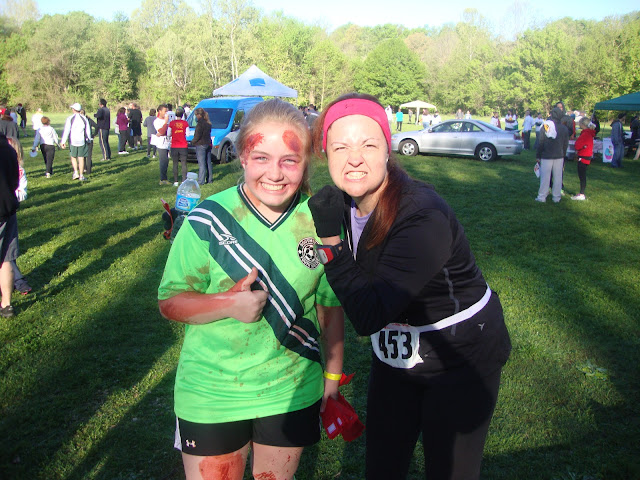 This video will make you SICK :) But yes - it was this crazy at the end... & yes, there is a zombie bunny rabbit... & yes, I screamed right when I got attacked right at the end by that young lady. 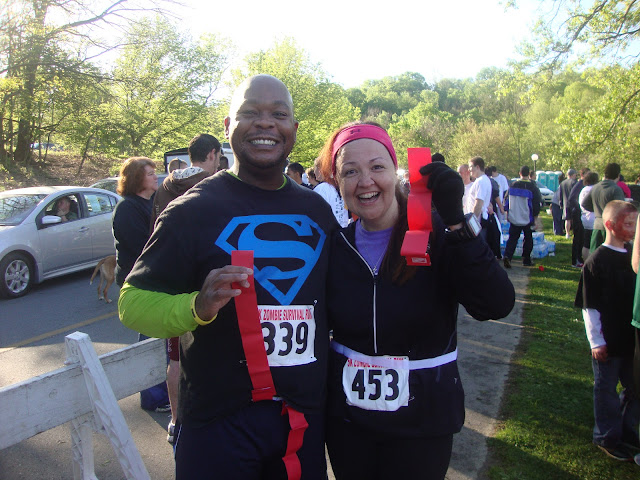 I dont even know my time - in all the confusion & commotion, my watch got turned off... & I didnt even care about time.  It was just about fun... & it truly was the most fun I've ever had running...

The awards that they gave out too for the top winners?  BRAINS!!!  Statues of brains!  How awesome is that?

Next year?  Oh yeah... its going to be EPIC - I can tell!!!!  This race SOLD OUT on its first year & people are already talking about next year being BIGGER & BETTER...

I just need to practice my football moves now.

... & then I'll probably get dizzy, fall & zombies will get my brains in the end anyways...

Here's one final video... the longest stretch of video I took - so you can see how many zombies there were... CONSTANT...

Laughing while trying to running is HARD!!!!


And LOOK!!! Our local newspaper did an article on the run... & the picture on the front page of the article?  My buddy Scott!!!  Running from the zombie at the finish line!!! How awesome is that?
http://www.courier-journal.com/article/20120407/NEWS01/304070043/5k-Zombie-run-scares-up-hundreds-Cherokee-Park