A story about The Last Supper 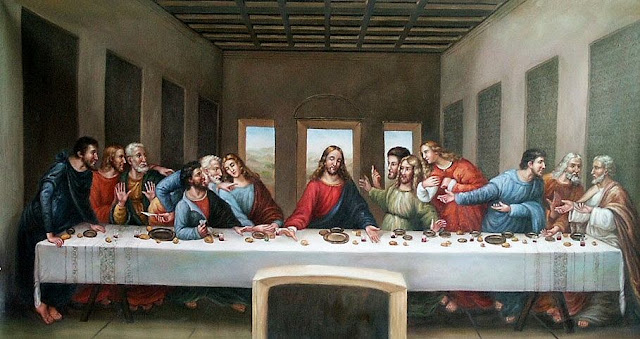 There's a little ancedote of Leonardo da Vinci, the great painter, sculptor & inventor, about his painting, The Last Supper - one of the most copies & sold works of art in all of history.

It took da Vinci 20 years to finish, since it was so difficult at that time to find people who could pose as models.  In fact, he had problems in starting the painting because he couldnt find a model who could represent Jesus, someone who could reflect in his face purity, nobility, & the lovliest feelings.  Also, the model needed to possess extraordinary manly beauty.  Finally, he found a young man with these characteristics, & it was the first figure of the picture he painted.

Later, he went looking for the twelve apostles, whoome he painted together, leaving Judas Iscariot's spot open, since he couldn't find a suitable model.  It had to be a person of mature age who had a face with the traces of betrayal & greed.  That is why the painting remained unfinished for a long time, until they told him of a terrible criminal who had been taken prisoner.

Da Vinci went to see him, & he was exactly the Judas he wanted to finish his work.  So he asked the mayor to allow the prisoner to pose for him.  The mayor, knowing the master's fame, gladly accepted & ordered that the prisoner be taken to the painter's studio, chained & accompanied by two guards.

During all that time, the prisoner showed no signs of emotion for having been chosen as a model, but remained completely quiet & distant.  Finally, when da Vinci was satisfied with the rsult, he called the prisoner over & showed him the painting.

When the prisoner saw it, he was greatly impressed & fell to his knees, crying.  Surprised, da Vinci asked why he was crying, to which the prisoner responded: "Master da Vinci, don't you remember me?"

After looking at him carefully, da Vinci answered him, "No, I have never seen you."

Crying & asking for forgiveness from God, the prisoner said to him, "Master, I am the young man you chose ninteen years ago to represent Jesus in this same painting"