Whew... ready for my weekend? * Ricky took pictures throughout the night... I like this one... its where I was channeling my inner-Elvis... now if only I had a white cape drapped around me.


* We head home because we have a phone call that two little boys & their mommy are in our driveway... GRANDBABY TIME!!!

* I couldnt get over how much Isaac looked like he's grown... since we saw him in just 2 weeks!  What the heck?  So we started a new thing - every time they come, we're measuring them.  I still couldnt believe how tall Isaac was! 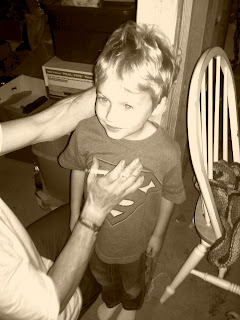 *Julie headed out to run a race so I was on breakfast duty... pancakes!!!!  So glad to see Isaac ate them all up too.  Luke was too busy just being into everything.

* I got to head out to photograph an event... LOVE event photography.... but it was a first birthday party.  I couldnt go empty handed & had the perfect gift for the baby 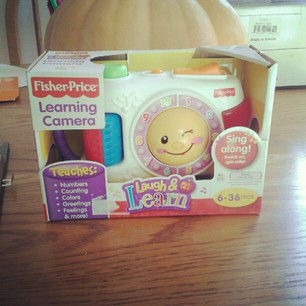 * Got home & we had a birthday celebration... Isaac got to open his gifts & we had cookie & Spiderman cupcakes... good times.


*I was on a camera mission... I kept my good camera out & took all kinds of pictures of the boys...got some great shots... those faces just are the cutest faces around.  I'm not even joking.


* Ricky took Isaac & headed out to look at cars... Julie & Luke went with me to deliver a wedding album.  I get so giddy excited to let a Bride & Groom relive their wedding day in photos... this couple is so dang sweet too, I'm going to miss having a reason to talk with them.  EXCEPT, they're moving to my town & I'll actually pass their new home on my way to work, & on my way home.  I told them I may just pop in for dinner one night :)

* Had a photo session scheduled, but it was like monsoon weather.  Winds up to 30 mph - so that was nixed...

* Gave us time to go to the movies!  YIPEE!! We saw Hotel Transylvania... I thought it may scare Isaac a little bit, but he really liked it - laughed & watched every minute of it.  Luke watched most of it, until he slid on the floor & BOOM!  Banged his head right on the concrete.... he was fine... that kid busts his head everytime we're around him.  Julie said, "its because his head is so big"

* Luke was just having a grumpy gus kinda day - so we went to the ice cream place to see if it would cheer him up...here's the kids ice cream.... I thought it was the cutest thing I've ever seen... 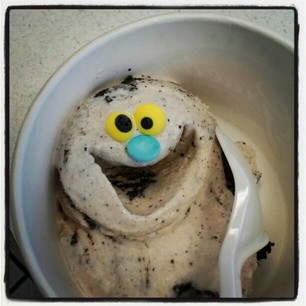 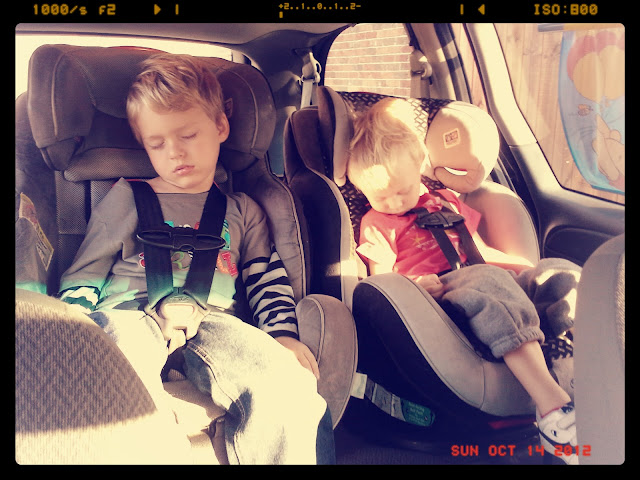 * Julie just decided to leave while they were snoozing... so no teary goodbyes.. that was nice.  But she said she made it to the end of the road & Isaac woke up having to go to the bathroom... didnt make it far :) ... & got further down the road & realized he left his Captain America Shield at the house.  DANG IT!!!!

* I spent the rest of the night working on pictures... & watching the Real Housewives of New Jersey...Goodness gracious... Poor Teresa...all I can say.  Poor Teresa..

I had it three times this weekend... would have had it 4 if it wasnt for the ice cream stop instead