Friday... & the world is still going crazy....
I'm sitting here watching the results of last night's chaos...
one Boston Bomber dead... the other on the run
just sad...
All I can see is a 19 yr old BABY that got taught wrong things in the world

Jesus come today
******
I'm headed to see my nephew off for prom tonight
I'm excited... but can't believe it
He was just a baby yesterday
& tonight, he's venturing to his Jr. Prom Ring Dance
How did I get so old without noticing?
*******
Storms rolled through last night
How do I know?
Not because the weather is colder now -
not because the grass is greener
But because Ricky & I have scratch marks all over our heads & faces from Bruno
who freaks out at the sound of thunder or the sight of lightning
For the record, on top of someone's head is the safest place to go for a storm
*******
Anyone ever try one of those Thunder Blankets for dogs?
Ricky says he refuses to pay that much for a gimmick
I keep hearing they actually work though
Anyone?  anyone?  Bueller?
*******
I was out on my run yesterday...
WHAT IS THAT?
A SNAKE!!!
I screamed & ran out in the street & fled like my life depended on it
... I didn't care the snake was dead & not moving...
& then, running home, a boxer & a fellow dog were playing
(I see them all the time - they're friendly dogs)
This boxer must have thought I was up for a good romp
because he jumped up behind me ON MY BACK
... it made my legs almost buckle...
He thought it was fun, so he did it again
HOLY FLYING BOXER BATMAN!
Whew... I got away with dog scratches on my leg
...only to have to run by the dead snake again...
Its a tough run some days
********
FUNNY OF THE DAY: 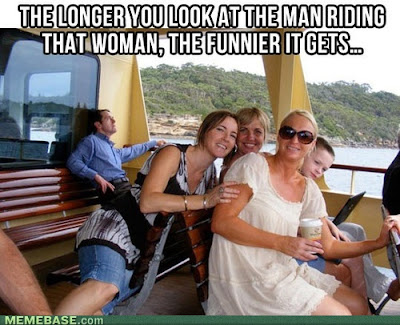 ******
TV Time:
Survivor:  If you're not watching Survivor anymore - & I get it, its on like season 135 - you missed it.  The BEST TRIBAL COUNCIL EVER happened this past week.  One of those that I was gasping, & cheering & pumping my fist like I lived in the Jersey Shore!!  Good stuff!  GO MALCOLM!!
Arrow:  We love this show... superheroes always rock!!!  ... & when he started jumping over building on his own, in daylight, I said, "This may be edging on the line of corny"... Ricky said, "nope - this is what makes superheroes awesome"
Dancing with the Stars:  Thank you America for not voting for DL & sending him home
Real Housewives of Atlanta Reunion:  Good to see Kim come visit.  I think she held her own, even though she was nutso in this season - before she walked out.  I know she had to do good PR though since she has her own show coming out.  Best part of her appearance - Andy saying, "Kroy is like a bailiff"
*******
Hope everyone has a great weekend & A FABULOUS FRIDAY!