The weekend my husband ended up in a parade?

We made it - we survived the one year anniversary of dad's passing.

I will say, I'm so glad I took the 2 days off of work on Thursday & Friday. It was good to relax, spend time with family, get lost in some Netflix, read a little, love on the dogs a lot, just take some me time.

Honestly, I have not taken a day off for a 'just because' day off in over a year... so to say it was needed is beyond an understatement.  & I even steered clear of blog land those 2 days, so if I missed something going on big in your life I need to know about - tell me - give me a nudge in my comments like "Go check out Friday's post"... I hate when I miss big announcement from my blog buddies.

So how did we get through... with a lot of laughter & memory sharing & of course, ice cream cake. 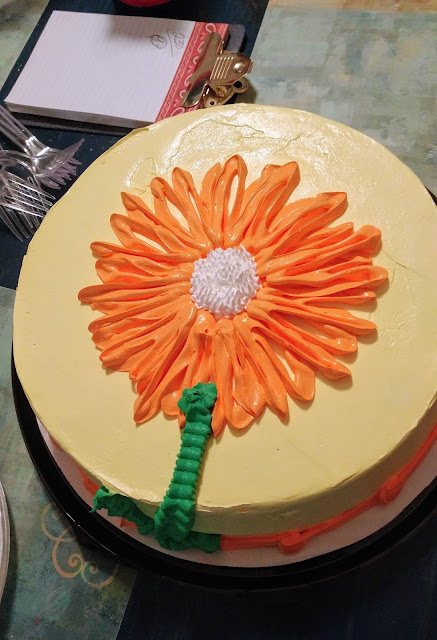 Mom picked this one because it looked like a sunflower - & those were my dad's all time favorite flowers.  & he loved ice cream cake.  It always drove me nuts because that was his birthday cake choice every year & I am not an ice cream fan.  But I like sorbet... I know - I'm weird. This is not the only issue I'm weird about.  ... but I ate a big ole piece of ice cream cake for my daddy.

The whole time I was eating it, I was like, This is horrible - this is making me sick - why am I eating this.  & me & my sister in law started laughing because she felt the same way.  The things you do for the ones you love.

But we did go out & enjoyed dinner together....even though it doesnt look like it here. 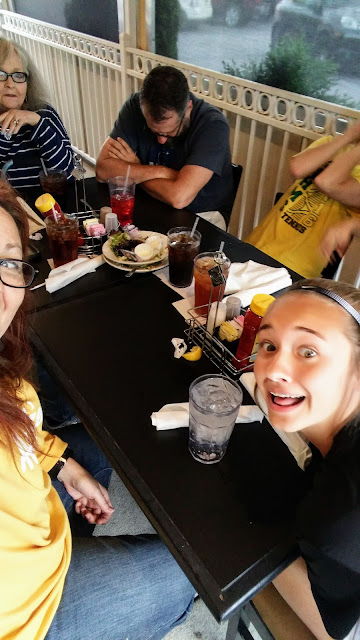 How are all these camera hiding people my people???? HOW????  At least one of the twins feels me here....

& I guess the other one just wanted a picture all to herself when she got my phone.

I have to say, I felt such a RELIEF getting to the anniversary date.  Like we have SURVIVED.

& I think I expected it to be so awful of a day in my head, I was glad that instead, it was just a normal day.  Yes, it was full of memories of last year... but I think we all did ok.

A HUGE thank you to so many of you that text me, send a message, send cards.... again, I totally know its the love & support of the people in our lives that carry us through these hard times.

We also had the Steven Curtis Chapman concert on the anniversary date of dad's passing.... & that was such a joy to my heart to go see my favorite singer. 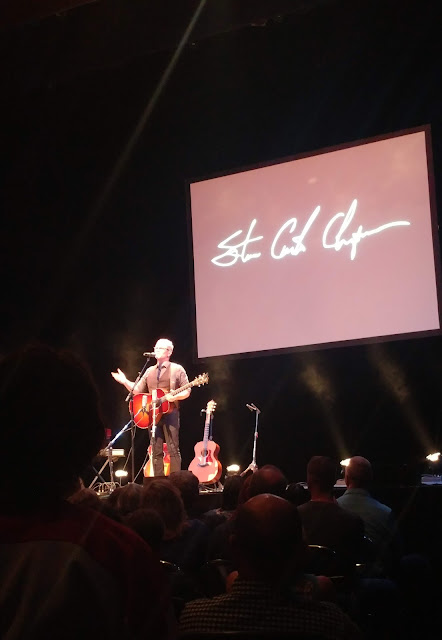 I will say, he sings the song Cinderella about enjoying the dance with his daughters before they grow up & are gone too soon..... & he plays the video in the background as he sings it where he's dancing with the his little girl, then the teenager version of his little girl (who in the video, that young lady is now his daughter in law) & then the last grown up version is really his oldest daughter who got married.....watching that video, & having my emotions totally on high for my dad, it took on a whole new meaning for me - the daughter on the other side of this song.... & I was just so thankful that I had my dad in all the stages of my life. The little girl, the teenager, & the biggest day of my life, my wedding. (Here's the video if you've never seen it)


Saturday was super fun in our little town when Greenville had a parade to celebrate its bicentennial.
Of course, once again, we all though of my dad. He was ALL ABOUT a little town parade.  Our whole life, every September, we had to drive up to his home town of Dale, Indiana & watch their little town parade. It was tradition. 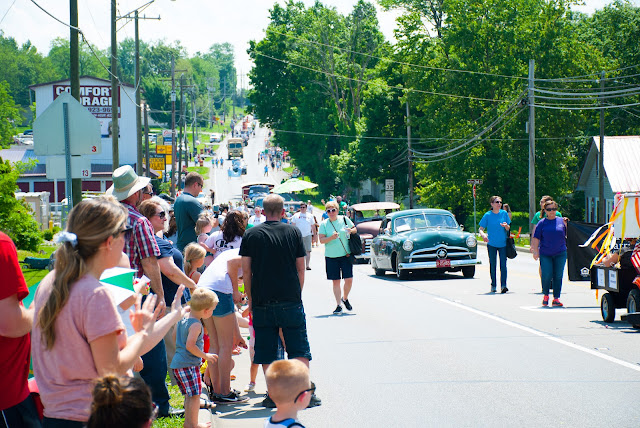 So when our own little town had a parade - we all said the same thing.... dad would have loved it so much. Heck, I know my daddy & he would have asked if he could ride his horse in it - GUARANTEE IT!!!!


But it was super fun because being in a little town, there were so many familiar faces in the parade that we knew.... one of them was my youth kiddo walking with cheerleaders, saw the awesome ladies in our hair salon.... 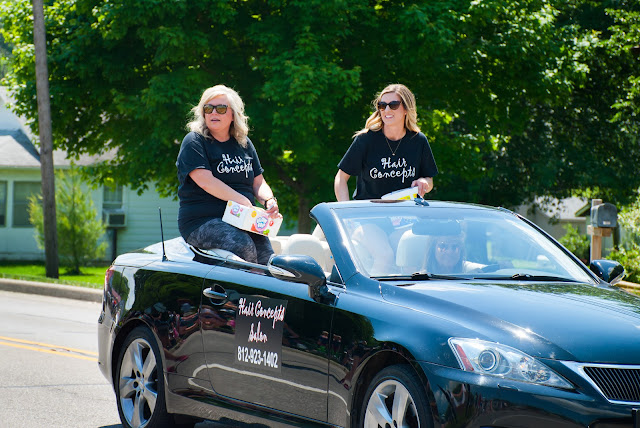 ....saw one of my past bride's parents, saw another bride's grand father driving an old truck (which by the way, we took a picture of him dancing at the reception at her wedding that is STILL one of our all time favorite dancing pictures)

... & of course, we were there to root on our 'heart church' that was in the parade with the float "Jesus is our Super Hero"... LOVE THAT... & yes, I've learned to call GCC my "Heart Church"... because spending 15 years there & having so many people there that I still consider my church family - & the way they opened up the church for my family when my dad passed - & having the pastors of this church as my own FRAMILY - yes, it may not be the place I go to every Sunday to worship, or where I serve at - but I do still consider it my church.  Always holds a special place in my heart - so yep, my "heart church"... anyways - so happy to wave at all my church family on that float. 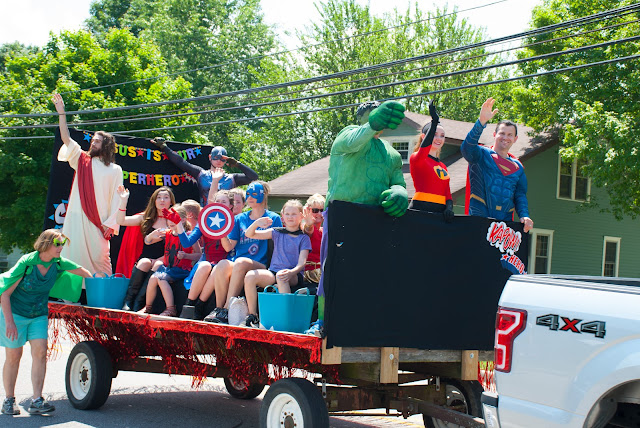 The best part of the parade for me is to see my husband showing me how awesome he is - as usual.

Our neighbors were driving their tractors in the parade.  I was looking down the road in my long range lens & saw them coming... & then, next thing I see, they're stopped in the road.  & then I look through my camera lens again & see one of our neighbors jumping off his tractor & pushing the tractor his wife was on to the side.  I saw what was happening & looked over at Ricky & said, "No one is helping them".... & then my awesome hubby does this..... 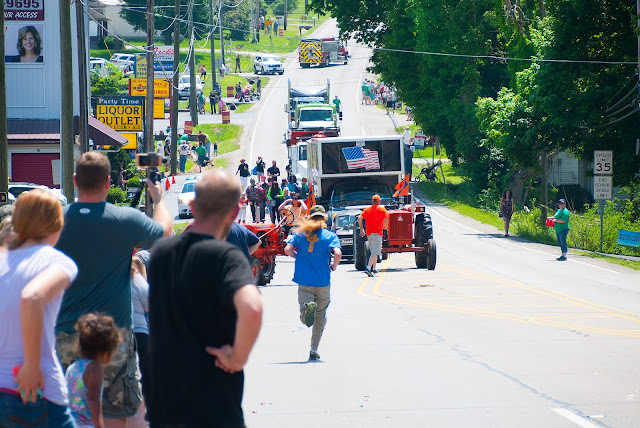 Look at him go!!! haha ... Now you need to know - Ricky HATES attention - HATES it more than taxes - that's saying something.  So for him to run down the middle of an empty road on a parade route?  That would be some people's version of public speaking - a small idea of a total nightmare.

But what's so funny to me is he said he could hear people yelling "HEY RICKY" as he was running. I told him he should have at least given a parade wave.  ... I think he just wanted to crawl under a rock... or at least a tractor.

In the end, all was good. Neighbors back on the tractor & finished the parade in true Greenville fashion. 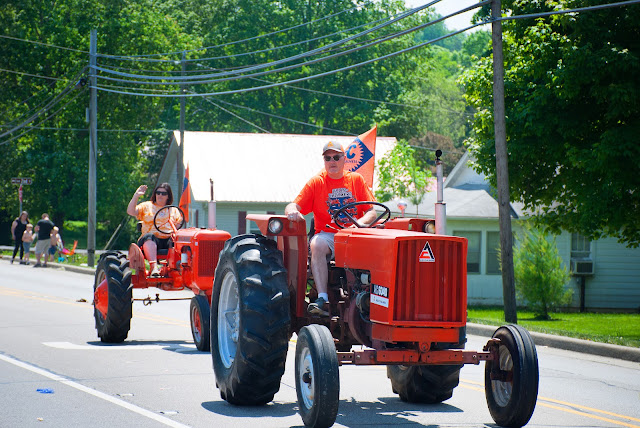 I hope our town does this more often.  & that it grows each year.  I can't believe there wasn't a marching band in there somewhere!  Next year, I'll walk down the road with my Spotify if they need me too... playing Steven Curtis Chapman #obvs

Sunday, we had HSM & I was super excited to see our former HSM worship leader in there - he's gone on to be the Lead Worship Pastor for our campus - he's AMAZING!!! So I soaked in his energy with all our High School students... because their energy goes up with him there.

We had the cutest conversation in our group too when one of our girls told us about her first date the night before.  It was so beyond precious, I could hardly stand it.  I told her she was making me feel those butterflies in my stomach from young love.  These stories just make leading in HSM so much fun.  Makes you feel like a kid again in your own way.

Time to gear up.  Being off 2 days at work, I know I'll only have a few HUNDRED emails to go through... & we're back to MOVING DAY again this Friday, where we move back down to our new location #supersmall #cramusallin #cantbreath #makethebestofitanyways ....I needed the relaxing day before this week.

Does your town have a little parade?

Have you ever listened to Steven Curtis Chapman or saw him in concert?

Does your family hate picture taking too?