The weekend my rear end just cant catch a break....

So this is a rare post... I dont think I took many pictures this weekend.

Which, reading the title of this post, most people are lifting up a prayer of gratitude!
Can I get an Amen?

It was basically a laid back weekend. One I didnt even put on make up for.  That's a good weekend!

Friday, I left from work to go over to my mother in law's house where she made dinner for her daughter - Ricky's oldest sister. I'm sure she doesnt like that title... but she is the head of the kid gang.  A good place to be.  ... wait, Instead of calling her the "oldest sister" - I'll change that to the "First Daughter of the family".. or even "First Child"... sounds so much better.

Anyways, we went over to have dinner to celebrate.  I haven't seen my Vincent family in forever it seems, so it was great to stop by & see everyone & do a little catch up... & eat some warm apple cobbler too. That never hurts anything.

I left from my MIL's house & went by my old house - the house I lived in my whole life until I got married.  Man.  The memories. I just look at that corner window & think, that's where I grew up at - in that little room.  It's such a weird feeling to go back & look at an hold place that holds so many memories.  I think that's the first time I've seen the house too since my daddy has gone to heaven so it took on an even more of a heart tug.  Whew. Memories man. They are an incredible gift from God. 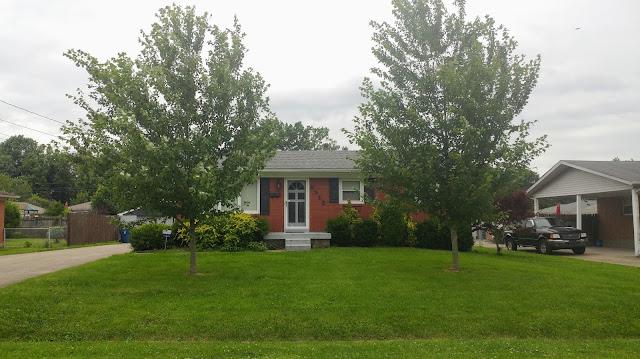 Saturday, Ricky had to work.  But man, my morning started off AWFUL....

My heart was racing from zero to 65 in a few seconds. No way I was going back to bed.
It took me a good 15 minutes to calm down & double check my watch & the calendar & Alexa to see what day it really was.

Ricky went to work & I got caught up on some Jane the Virgin & 2 episodes of The Handmaid's Tale (June, you drive me nuts)... & then I did what I do best when Ricky is at work & I have the house to myself - CLEAN.

& then read some more.

Then Ricky came home & I dared him to dirty up the house. DARED HIM!

We went over to take care of the horses & here we go... the title of this post.

So Ricky headed down to the barn to start on the horses & I opened up my mom's door to go in.
All of a sudden - THE WORST PAIN SHOT THROUGH MY BUM! I knew I was getting bit by something. I thought it was a spider. & it just wouldnt stop. It was like I was being attacked.

I ran in the door & just started screaming - SCREAMMMINNNNGGGGG!!!!!
I threw my pants off & was running down mom's hall & went to the bathroom to pull my underpants down - convinced a whole slew of spiders were going to come running out.

My mom was in the basement screaming up at me, "WHAT IS HAPPENING?" & I'm like, "IM GETTING ATTACKED BY SPIDERS"... & then next thing I know - my nieces & my SIL was coming in the door.

Thank goodness they were a few minutes behind me or they would have seen me running down the hall with my pants yanked around my ankles... not that I have any shame at all when it comes to my bum after the past year.

My mom was yelling for me to come downstairs because it was easier for me to get down to her than for her to get up the stairs fast.... & we all went down there while I was still screaming & my mom looked & yep - my butt was swelling up.

That's when my niece was like, "Yeah, there's a wasp nest right there on her front door"

That would have been nice to know.

So apparently a WASP stung me in my butt -  in a few places!
Oh the whelps!
OH THE PAIN.
It took about a half hour for the initial pain to stop...with an ice pack on my butt.

but we all went out to eat to celebrate my niece's big win of a tennis tournament ... & throughout, I kept feeling like I was getting stung again.
I surely wouldnt let a swollen butt keep me from going out to dinner.  I have priorities!

I've not been stung by a wasp before.  Baby Jesus!  Give me strength!  That was so painful! It wasn't until nearly midnight that it finally started easing up.  That was one angry wasp!!!

Sunday, with the HSM girls all at Bible & Beach, I decided to sleep in. Especially since Saturday's "sleeping in" was such a bust.

Ricky & I decided to go grab some breakfast, but ended up not getting out until around 10:30 - which apparently is the prime time for everyone in our area to go get breakfast. The place was PACKED.   We ended up waiting 15 minutes for a table & then had to wait 35 minutes for our food.

We really didn't mind though. It was just a laid back morning & it was just nice to sit & chat for awhile.

We had drove separate so Ricky could go to Home Depot while I had to go to Sam's Club & pick up some groceries.

The rest of Sunday, just a bunch of grown up stuff, like making out bills, trimming up Zoe, changing sheets on bed.  All that fun stuff.

& then of course, had to end the day with the Tony's... that's the only award show I'll watch all the way through. Give me ALLLLL the musicals please!!!!

I've got a pretty packed week ahead so I'll take a weekend where make up of optional & my house ends up clean at the end of it all.

Have you ever been stung by a wasp before?