The weekend that I got out of the house for the first time in over 2 weeks....

How was everyone's weekend?  Are you finding that weekends aren't much different than Monday - Friday?  For me, I'm still looking forward to them because I dont have to go to my back bedroom - which has turned into Office Central. Or basically, Chaos Central is more like it.  I'm so glad to walk out of that room on Friday & not have to go back in till Monday.

So Friday, when I shut the computer down, I was wanting to go outside & get some fresh air- but forget that. It had turned so chilly & grey & rainy out.  I basically just wrapped up in my sweatshirt & sat in front of a space heater for awhile to just relax. 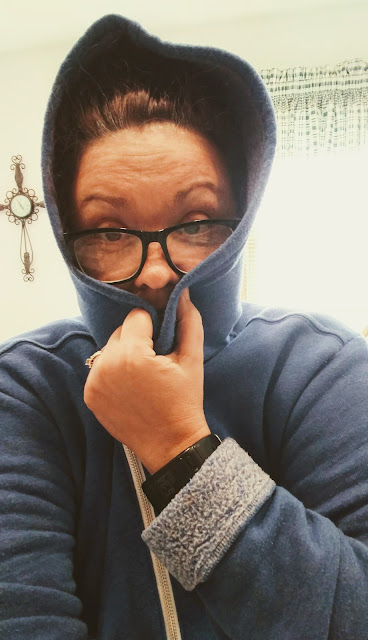 Then it was time for our nightly Zoom Bible Study with my HSM girls.

Another great talk about the power of the tongue & how watching what you say & how sometimes its better to just be quiet than speak foolishness. 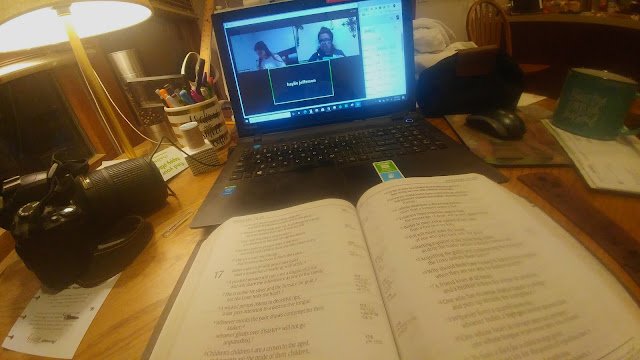 Which fit perfectly watching the news with more news of protesters out.  Want to see what foolishness looks like... yeah, turn on the news & you'll see it.

I ended up spending  my Friday night watching a lot of news - which why do I want to torture myself?  Every time I do, I never get a good night's sleep. Never

Saturday, I got up with a fire in my belly to clean the house...& I did fairly well, for a few hours. Got some deep cleaning done on a few rooms.  But then I remembered that I needed to call our vets office.  I get our dog's food from Chewy's on Auto-ship (Love it) but with the COVID stuff happening, we were delayed on the big dogs food. It did come in like with 1 day to spare (whew) so I went ahead & gave an early shippment on their next order and Bruno's food - which is a specialized prescription food.  We got notice that they were out of it & it wouldnt be shipped. Oh great.  SO I called the vets office & they did have a bag. Thank goodness!  I went ahead & paid for it over the phone & they are currently not letting people come in unless its an emergency.  They'll even come out & get your pet if its just for shots or a check up & you can stay in your car.  They told me to pull up, let them know I'm there & they'll bring it out. 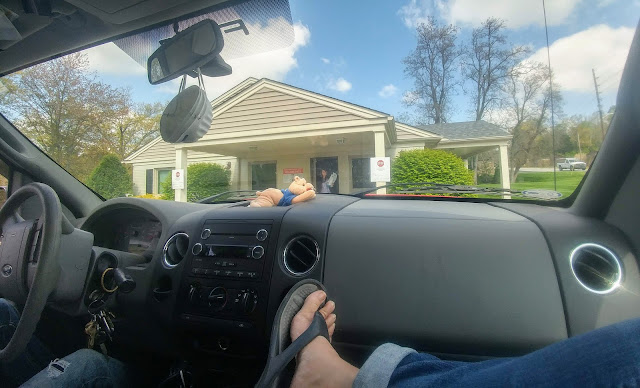 Worked perfectly.  Didnt even have to get out of the truck.

It felt so weird to be out. I hadn't been outside of my drive way in over 2 weeks.  Hadnt been down out of the the Knobs in over 3 weeks.  It actually gave me a little bit of anxiety. I feel like my home is a safe bubble & I felt so vulnerable being outside of it. Is that normal? Anyone else feeling that way?

While we were out, we ended up driving down to Home Depot so Ricky could get some more wood to finish up the tree house.  Me? I said I wasn't going in there - the line coming OUT of Home Depot was like Black Friday going to a buy 1 get 3 free sale. It was RIDICULOUS LONG.  I stayed in the car with my book & just read.  It took Ricky quite awhile to come out because he said they were making people wait in line to get in.  But he said he wasn't sure why because inside, it was packed. 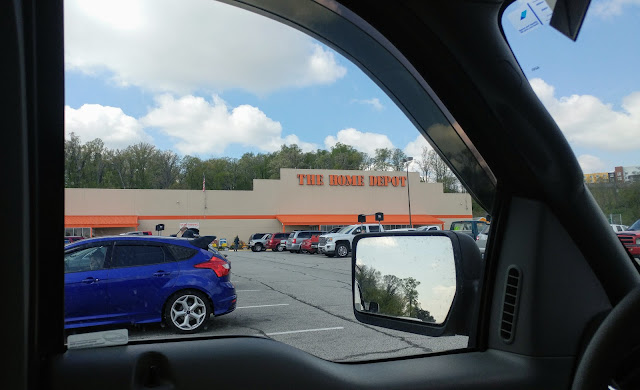 Now, with Ricky's lung issues with the fire, he has been so good & adamant about wearing a mask. He said he probably saw maybe a handful of people wearing masks in there.  & people were so close to one another.

I just dont get it.
I DONT GET IT.
Are people not taking this stuff seriously?
Do they NOT CARE?
Do they just think selfishly & about themselves?

I mean, my husband's lungs arent like a normal person's lungs. If he got this, it could be something horribly serious.... & people are walking around like it's January 2020.  Like nothing has ever been said about social distancing.  Or what does it cost you to wear a mask or something around your face?

I honestly dont know of something that makes me so infuriated than this act of non-existent compassion for others.

I can talk about this for hours....I may do another post about it this week just because I'll get distracted - get on my soap box & let all my feelings out & we just dont have time to talk about it in a weekend recap....

SOOO... we picked up some lunch & came home & I was just so stressed out. STRESSED OUT. I'm like, I dont want to go back out ever again. I'm good staying at home.

Even more so because I found online that they were playing the full production of The Phantom of the Opera on YouTube.  I was ALL about it. Got out some yarn & laid back in the recliner & loved every note of it. 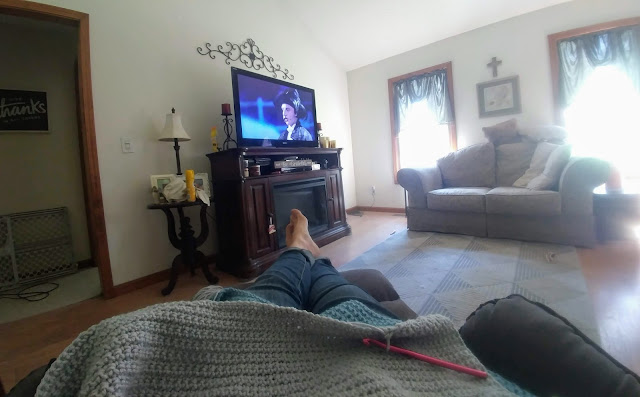 Ricky? Not so much... he could hear it playing & was like, "Please turn it down".  I'll say, he tolerates my love of musicals further than I ever thought he would.  So I did turn it down a notch or two... but warned him I may play it again at least 2 more times in the 48 hour period they were going to give access to it.  Ricky decided to take this time to go work on the tree house.

It was still a little chilly in the shade but felt cozy in the sunshine so I ended up getting Bruno up & went out to watch Ricky work on the tree house  & put him in his stroller & took him out to enjoy the sunshine too. He was so comfy in it - I love when he would raise his face & turn it towards the light.  We think he can see shades of light & dark - but I know he can feel the warmth too.

I usually walk him up & down the drive way in his walker but so glad I've taken it to the back yard so I can just sit on the porch & "rock" him by moving it back & forth - & able to walk him around the yard where he can hear the aussies running.  I'm looking forward to some warmer days so I can have him outside more often. 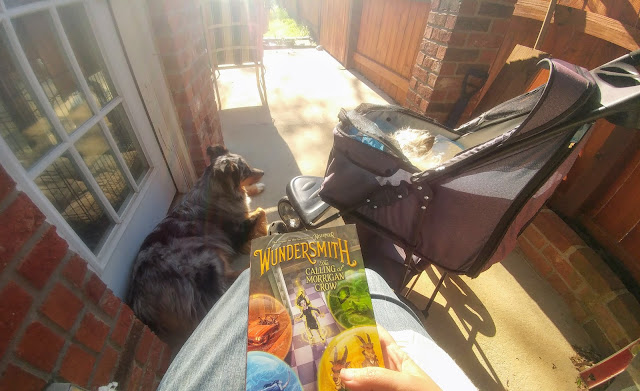 My Saturday night, I did my best to stay away from the news... found some new shows on Hulu to watch....but still slept horribly.

Sunday, I got up to clean up my bedroom some & then it was church time.  Ricky was laughing at me because I was all up in the middle of my living room, singing my lungs out, with arms lifted high & getting my worship on.

It was another gloomy, grey, chilly day so I didnt feel like doing much except snuggle back in my bed under some blankets. I did get my planner ready for next week, because ya know - SO MANY PLANS ;) LOL...

But then it was time to go pick up my Click List Order... which turned into a total nightmare.  To make a VERY long story short - we ended up waiting about 55 minutes before we got our food - & then half of it wasn't there, & then most of it was replaced, even though they didnt check with me if I wanted most of these foods. So I spent a hunk of money for stuff I wont even use.... AND then they gave me (for the 2nd time in the past month) veggie burgers that were expired. & these babies aren't cheap.  I'm basically about $25.00 into expired food we cant eat. I'm not someone who ever calls or raises a rukus about such things, but I was at the end of my rope after all the waiting & mess ... so they told me to come back down & they'd exchange them or give me a refund. OK... the point of Click List is I dont WANT TO COME IN & BE AROUND PEOPLE.... BIG SIGH.  I'll have to think if its worth $25 to drive all the way back down & deal with the hassle. If I do back down, I'm going to take some of the replacement food they gave me I'll never use.  I may come out with $50.00 back in my pocket in the end.

The one good thing about being out - we picked up some pizza for lunch/dinner.  We placed the order from our phone outside & 15 minutes later, Ricky went in to get it. The guy said we had been the 3rd pizza they made all day long.  That's tough man. 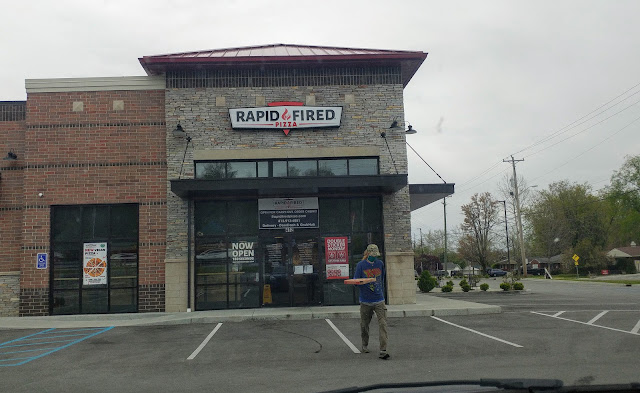 The new highlight of my Sunday is we're doing HSM with ALL the HSM gangs now.  So we all long on together - I think there was like 75 people on last night... & then after a little bit of talk & fun, we all get divided into different chat rooms, which I didnt even know ZOOM could do! It was so nice to see so many familiar faces again.  Miss ALL these kids & these amazing leaders. But we're going to do this every Sunday now - which is something to really look forward to.

Then man... time to get my breath.  Settle in.  Try & get prepared for what the week has in store.  Which I think we can all attest to now, we have no idea what lies ahead.  Can I get an Amen?

& finally - can we get a big HAPPY BIRTHDAY to our girl Julie!  She's been volunteering so much of her time in the labs down at Vanderbilt  putting together tests that involve infected COVID patients.  To me, this is scary stuff. It's been interesting hearing her side of it - someone who knows the real science & understanding of all this. Hearing it from legit sources - not the news.  Believe me people, this is some scary stuff that is happening. I wish more people would really listen to the facts & science of this stuff instead of just thinking they know it all... OK... I said I wouldnt start...I'll stop. I mean, this is for a birthday shout out.  Thankful for the talent Julie has in working in the field of science & infectious diseases.  Hopefully she gets to celebrate her birthday somehow, some way.  Even if its not today, but soon!  We love you Julie & so proud of all you do!!!

So tell me about your weekend.....

How are you doing your groceries right now?

Are you getting this chilly streak in your area?