The weekend we celebrated our Risen Savior.... in sweatpants

Kicking off my 4th week of working at home (HOW DID THAT HAPPEN SO FAST? - BUT THE WEEKS FEEL SO LONG????)  I'm actually starting to get the hang of this gig.  Still has its challenges, but now I know what to expect & can tackle them better.  Just grateful I'm still working.

Did it feel like the most bizarre weekend to everyone else with Easter being totally different than usual?  I'm actually going to admit it here though... I honestly didn't mind it.  I really didnt....

But let's not jump to Sunday just yet.... let's back up to Friday.

I was ready to shut my computer off on Friday & yell "WEEKEND" because that is now the way to mark it the official weekend when you dont walk out of an office door on Friday.  The dogs are starting to know what that means because they grabbed the ball & ran outside ready to play.

I  ended up making a big ole dinner for us (look at me becoming Ms. Domestic) & we enjoyed it & then got settled in for Good Friday service online.  It was so good.  I have always just loved Good Friday service before Easter. It really sets the tone & gets me in the mindset of what we are celebrating. I heard Steven Furtick say one time, "you cant have the resurrection without death first" - which is really powerful if you think about it.  But the message was really somber & made you really reflect on the heartache & sadness that Good Friday held all those years ago. 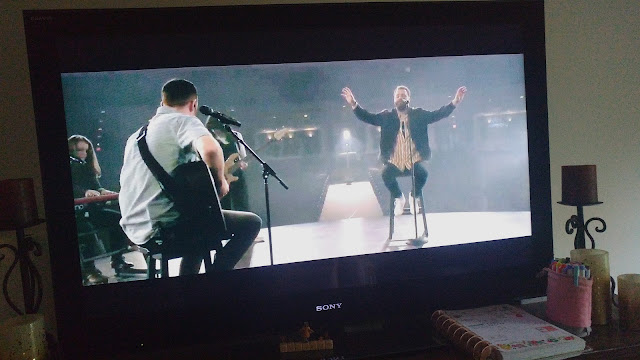 I spent the rest of the evening catching up on some shows while keeping Bruno up & moving & letting him stretch those old old bones of his.

Saturday, I woke up super early ... like 5:15am early - I just couldnt sleep. So I turned on the TV & got caught up on Survivor & then started watching The Politician on Netflix.  I love Ben Platt. His voice is like butta....


I worked on some yarn projects, did some laundry, played a few games of Yahtzee with the Hubs...read some... did some Bible Study.... you know, just ordinary quarantine stuff.

I keep seeing where people say to take this time & do something you dont usually do - learn a new skill.  Well, I've been wanting to learn how to sew for years. YEARS.  I think I tried it one time & it took me so long to thread my machine that I said, FORGET IT - & put the machine back up.

Well, now, all we have is time, so I pulled it out- got my computer with YouTube tutorials out & I was like, I've gonna do this. .... 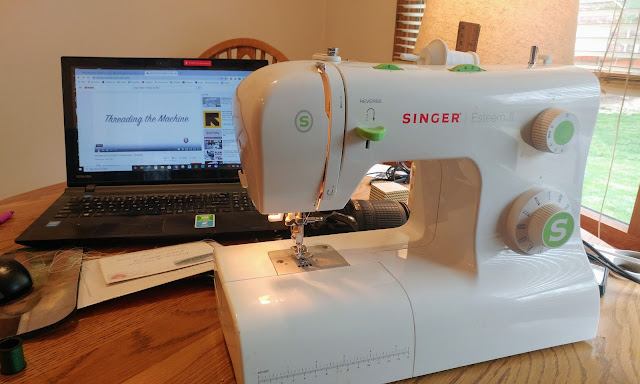 .... & over an hour later, I FINALLY got my machine threaded. GEEZ MAN... I felt like a complete idiot just doing that.

But then it got worse because the video was like, "OK, let's sew something & see how your machine works"... & this is what I got. 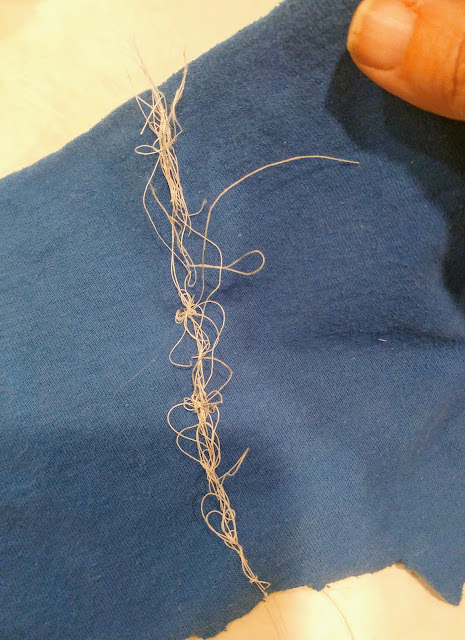 I was so aggravated.  Texting people I knew that could sew & sending pics & asking for their help....& 30 minutes later, I was able to do this!!! 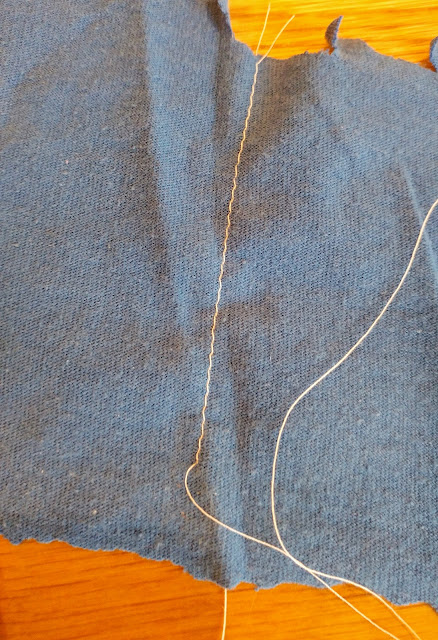 I also found out that material matters. I was using knit material - like t-shirts, which you need different needles for & different stitches for. WHO KNEW? Obviously not me.  But now, I'm wanting some real fabric & I am wanting to learn how to really use this baby.

While I was working on this.... Ricky took on a project of his own.

He was originally going to tear down a tree house we've had in our  back yard since we moved here.  We've seen so many kids run up that ladder & play in there. There's actually STILL coloring book pages taped on the wall that my friend Stephanie's grandkids did when they were little.  For perspective - they have ALL graduated now. That's how long they've been hanging.

So Ricky went out to start destroying it... & found that it's really still in pretty decent shape - just needed some repairs.... so this became his quarantine project..  We figure with lots of littles & grands still around, it can still get a lot of love poured into it - so why not fix it up. 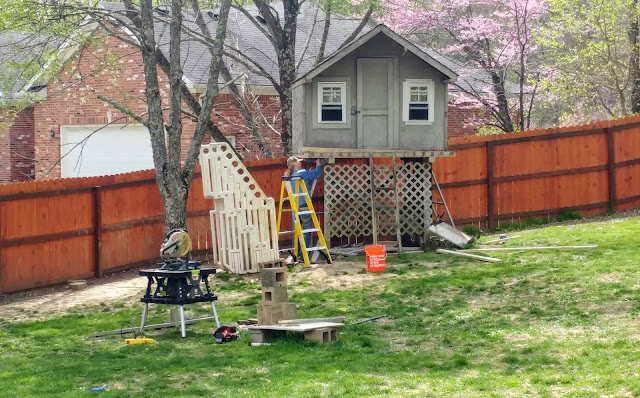 I told him that if there are no kiddos over here, I may go up there & fix it up myself... it'd make a great reading nook - right?  Hang some battery powered lights in there... get a fan.. put a nice little bean bag chair in there - I may never come down.

Saturday, I ended with another ZOOM bible study with one of my HSM kiddos...still trudging through Proverbs... & then it was bedtime.  Ricky & I were both pretty exhausted from all the skill / labor working.

I was kinda bummed that there was no sun rise in our area. Gray skies all day long. I LOVE the sunrise on Christmas morning & Easter morning - both days representing the LIFE OF JESUS COMING INTO THE WORLD!!!!

No sunrise, but that's OK... I made us a big ole breakfast to enjoy... & then it was time to settle in for Easter service online.

It was just the BEST message. So relevant for what the world is going through today. If you get a chance, seriously - check it out.    LINK HERE 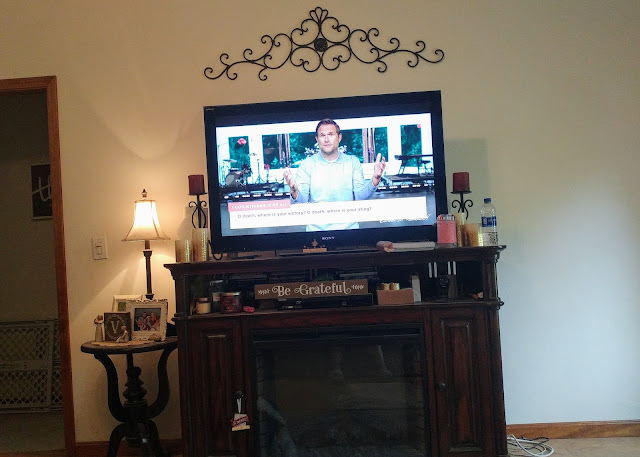 I know a lot of people have been really upset about the idea of being at home, tucked away, not going out & doing all the usual Easter things.  Well for us, it really wasn't much different than other Easter's. I mean, yes, we usually go to church, but we dont have little kids around here anymore so we usually just come home after grabbing something to eat.  It didnt feel too different - & I kinda enjoyed eating a big breakfast & then getting a cup of coffee & snuggling on my couch in my comfy clothes, hair not brushed, relaxing & having my notebooks & bibles & highlighters all around me.  To take the "show" out of Easter - the need for new Easter clothes, the wait at restaurants that are long on a holiday, the hunt for candy to put in containers around the house.... it just felt nice to relax - listen - take in the message in the stillest way possible.  Yep - I didnt mind it one bit. 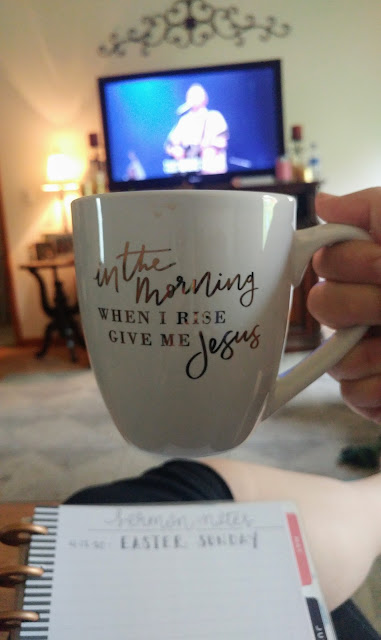 After it went off, Ricky went back out to work on the tree house some more & I ended up working out... & then did what everyone should do after working out - I made brownies.

Fun fact- I didnt have vegetable oil & wasn't sure how I was going to make them - because I'm not THAT good to make them from scratch. Box mix all the way baby.  But I googled & found out you can use the same amount in melted butter. UMMM - YES PLEASE. I'll do that from now on because these babies were DELISH. 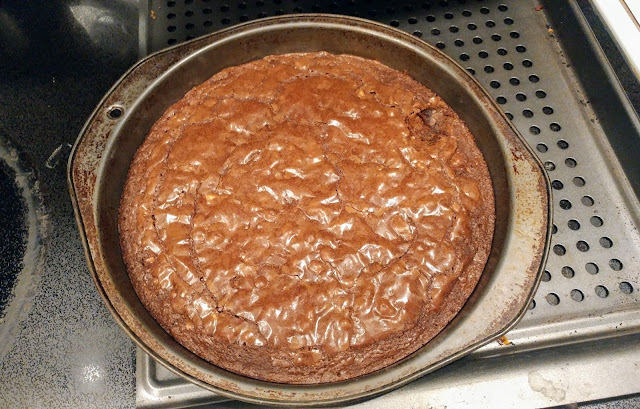 The smell of chocolate was so yummy in my house.  The Hubs had just came in from finishing up outside & smelled them & I'm not even joking when I say, this is what the brownie pan looked like in less than 2 minutes after I pulled it out of the oven..... 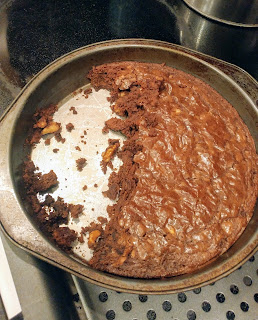 I had to take a few bites myself.

The rest of Easter Sunday was just laid back.  More crafting... more reading... trying to find beginner sewing projects online.... tucked inside since it has turned chilly & rainy.... played another few rounds of Yahtzee & FINALLY got Ricky to play me in a new game I've been wanting him to try, Qwixx (that's why I made the brownies - bribery) ... got my planner together for the next week, which basically has no plans. 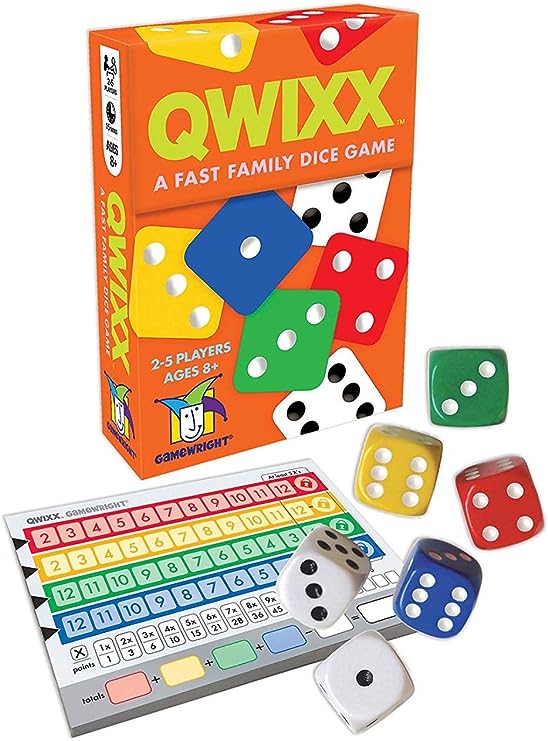 So all in all, I had a really nice weekend. Crammed lots of stuff in... things I wouldnt normally do if life was 'usual'.  I know a lot of people were bummed out about Easter being so different, but I hope everyone found a little silver lining about it & felt the presence of the Lord wherever you were & however you celebrated it.

& a big shout out if you actually got dressed for Easter. I applaud you. With a brownie in my one hand.


So tell me something good about your weekend....

Did you celebrate Easter?

Was it as good/bad as you thought it was going to be?

Are you learning a new skill while tucked away at home?