Did anyone else pay any attention to the Japanese Rocket that was going to land.... oh... anywhere? Who knew where?  When they announced that last week, I was like, great - does that come with a Johnson & Johnson shot that can cause a month of problems - because that's my luck.

But seriously... I am not someone who understands the need for all the space travel, the money that goes into space discovery when we have so many needs on the earth - & how much JUNK is up there just floating around? That's gotta cause some issues in the future somehow.... anyways - I was waiting to see where this rando-rocket was going to land.  Indian Ocean for the win. At least that wasnt INDIANA!

Anyways - glad it was the weekend - & what a pleasant weekend it was.

Last week at work was so hectic, busy, stressful &chaotic, so I was so excited for 4:30pm on Friday... which was actually more like 4:50pm... because last week...& I was just ready to relax the whole weekend.

Hubby had to meet someone Friday evening so I had the house to myself for a few hours, which I started to read outside, but then sprinkling happened so I just snuggled in on my couch & I had one snuggly puppy with me.... 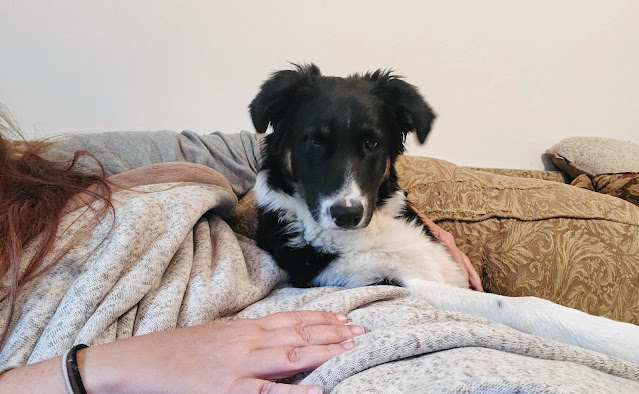 Saturday, I was up early & got caught up on all my Bravo Housewives.. NYC started - whooo hooo! & how is New Jersey only going to be like 13 episodes.  Disappointing.  But I'm excited for them to bring on Beverly Hills.  I love me some Housewives drama... as stupid as it is. Mindless watching - lets me escape the world from all the other stupid stuff going on.  My guilty pleasure.

Saturday afternoon was exciting for me because I was going to meet a friend I havent meet out for lunch in over a year. We usually like to do lunch or brunch every few months so this was just great to meet her & do a catch up.  We had a beautiful day to sit outside at Panera & enjoy the sunshine while eating some yummies... & I actually got to run into a friend from church I havent seen since last March.  A really good day. 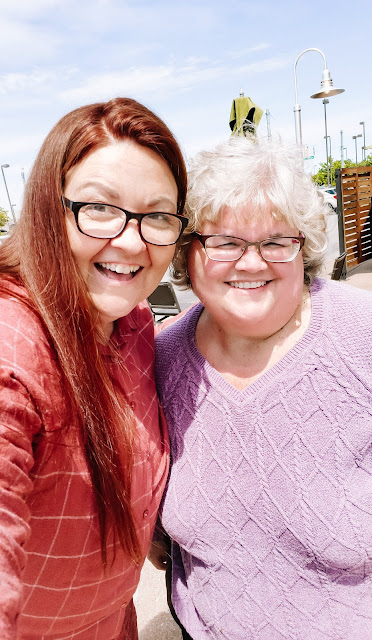 After we finished eating at Panera, we headed over to Hobby Lobby because I wanted to get some flowers for a blue Mason jar that Hubby found in our back property clearing it out. Its such a pretty jar... & I like how I have it at work now... 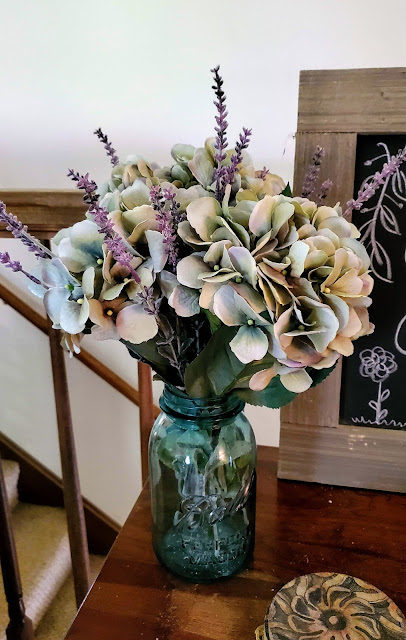 I also found the cutest sticker book... one that has a ton of 2021 phrases in it & masks & all the STAY AT HOME quarantining has to hold. 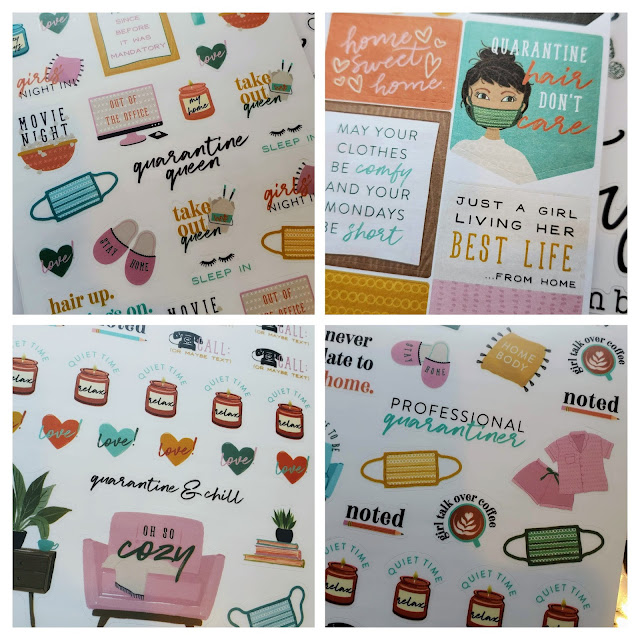 I got home & ended up hanging out with Hubby back in the clearing out & just enjoying the fire he had going where he's burning down the stumps left over from trees he's cut down.  Something about fires that are just magical to watch... & I love the smell of a fire.  I was begging him to throw in some leaves too because burning leaves is my all time favorite smell. I ended up coming in when it was getting dark & finished up Part 2 of Selena on Netflix. I appreciated they played a lot of her music in this part... (The corny wigs & awful backdrops is another story - but & it left me again, teary eyed. Such a tragic story of a talent. You wonder what would have become of her life. 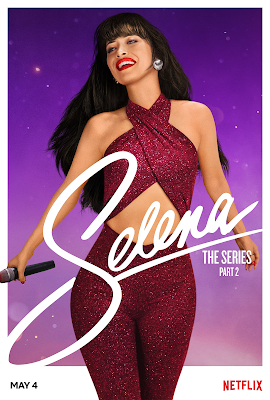 Sunday, I woke up to some Krispy Kreme donuts in bed with some coffee - with my babies - LOL - perfect for Mother's Day. 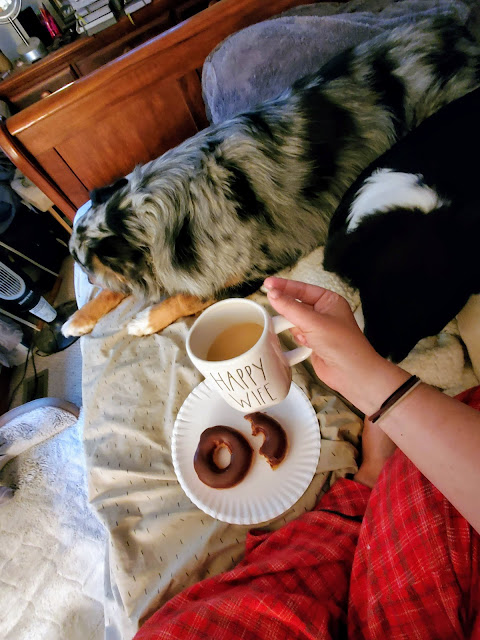 I dont know if it was the rainy, windy, gloomy day, but I was just tired all day. I had my first nap in the afternoon....

& then headed over to see my momma & take care of the horses.

I had gotten some things for mom & got these beautiful BLUE flowers, got a beautiful blue vase to go with it too.... but it was so weird because every time I took pictures of them, they looked PURPLE or lilac in the camera. What in the world. 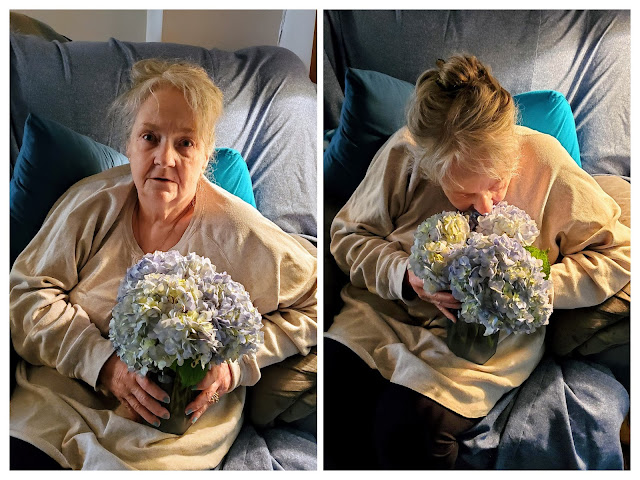 Hubby went to go see his momma (Missed seeing her - I love my MIL) so I got home & took a shower & ended up taking nap #2 - I hate naps too so this was really a messed up day.

Woke up to my babies wanting attention & giving me some love.... I'm sure they were just wondering where their daddy was at. 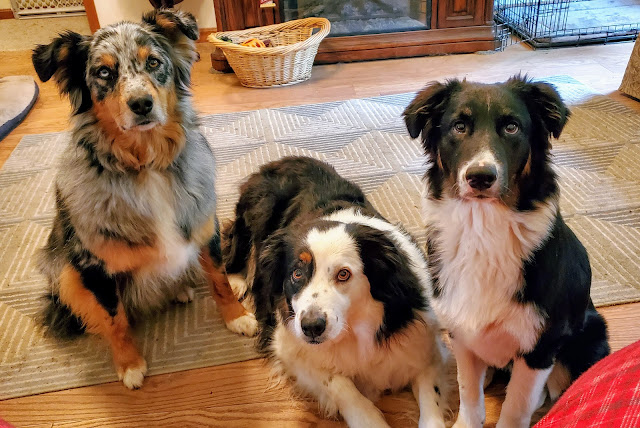 Hubby brought some dinner home & honestly, it  was just a good end to a lazy day....

What are you watching on Netflix right now?

Did you pay attention to where the rocket was going to land?

How was your Mother's Day?