I'm a nervous dog-mom this morning.

Today is Ozzie's "snip-snip" day... Neuter day. & of course, I'm a nervous wreck. Mainly because I know he's confused on where he's at & whats happening.  I'm nervous about the surgery - which I know is simple & fast & we love our vet. Even more, I'm anxious for the week - 2 weeks ahead & trying to keep an energetic puppy down & not jumping & running with his brothers.  That's going to be the true test.

Send our Ozzie Grayson some good wishes today.  I'll be watching my phone like a hawk waiting on updates.

Our Friday started off with Ozzie giving us a scare - not like today is bad enough - but he started our anxiety going early.

Friday night, our food loving puppy started acting weird.  Didnt want to eat (HUH?) & then got REALLY weird.  He took off from us, like he was afraid of us. Didnt want us touching him - it was the craziest thing ever.

Then, we noticed, his stomach was bloated out.  Which freaked me OUT because we had a neighbor that had not one, but TWO dogs die from stomach bloat - where the stomach flips around & pretty much requres surgery or they die pretty quickly.  We looked that up & they said that dogs are restless & struggle to lay down - & they are not able to throw up even if they try.... so Ozzie was laying down - though far away from us & in the corner of the kitchen (SO BIZARRE) & he did end up throwing up.  He just kept wanting us to leave him alone though.

That meant there was hardly any sleep happening in our home Friday to Saturday.  Hubby & I both were up all night long watching him & making sure he was resting - which he was.

When we woke up Saturday, he did act more like himself... was wanting to play & was active & giving us snuggles... not acting afraid any longer. BUT, his stomach was still really bloated & hard.  We ended up taking him to the park at 7:00am to see if he could go to the bathroom - because nothing like park smells to get the bowels moving for a dog. 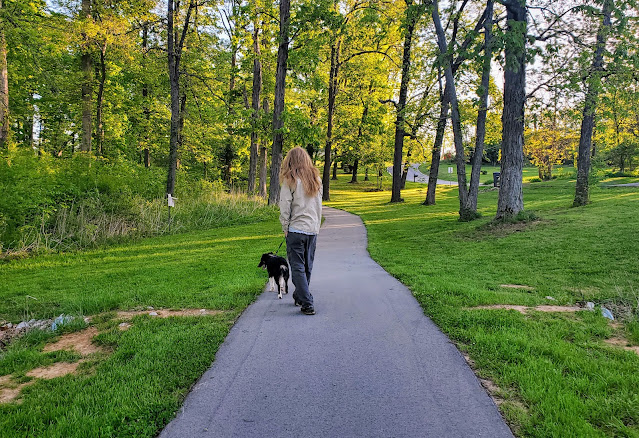 It was good to see him wanting to run & enjoying himself - especially because at 7am, there was no one around. Primo time to enjoy the park.  But no bathroom break for him. Dang it. 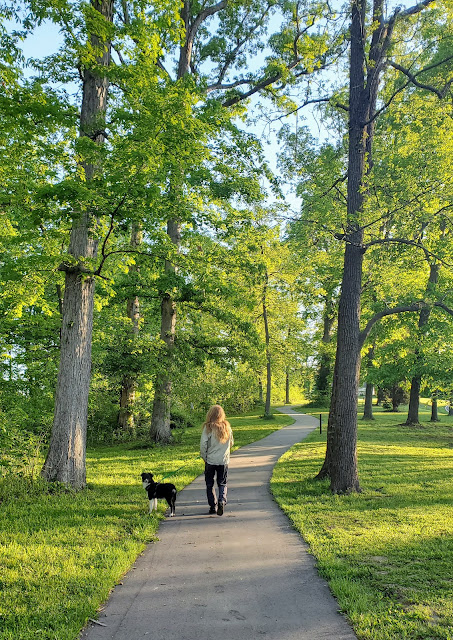 We did get home & he did finally go to the bathroom - though not much -& it was diarrhea.  About an hour later, his stomach started going down.  By the afternoon & into the evening, he was back down to his slim self - no bloat at all. He ate really well, didnt act like anything was wrong.... we still have no idea what happened.  I thought it may be gas? I was afraid he ate something that got clogged in there ... but I think he's OK now.

This puppy is going to cause me to have a nervous breakdown.

Most of Saturday, I ended up staying outside because it was so beautiful.  I ended up finishing my book - so enjoyed  it. Hubby said he heard me laughing at it when he was outside in his barn.

I ended up ordering a Click List & ran down to the store to pick it up - only to have the road blocked for the way home because a water pipe was busted... had to take the long way home. Good  thing it was a beautiful day for a nice drive with the windows down.

Tried to run into our local pet store to find a soft collar for Ozzie for today & they had 3 of them... all size XS. Dang it.  I hate those plastic ones they send the dogs home in.

I got home & immediately started into my next book... all the reading this weekend. 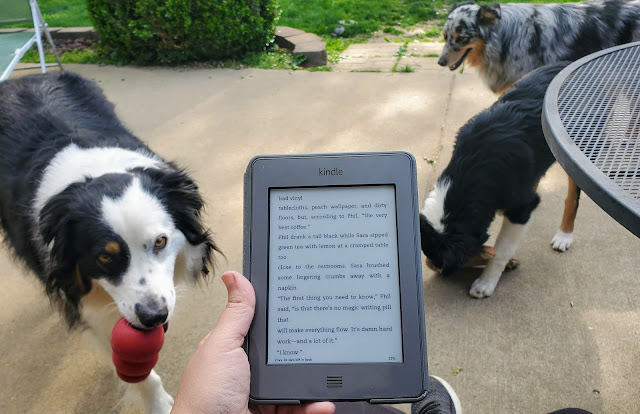 My momma needed to go to the grocery so we ran up & some more shopping done for her & then I came home & binged out Younger on Paramount+ ... I'm going to miss that show- so cute & funny. 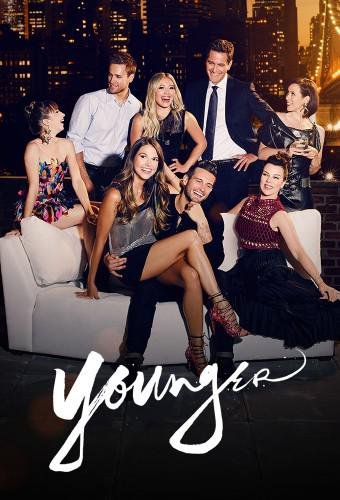 Sundays tarted off drizzly & gloomy so I stayed in bed for a really long time catching up on all my housewives. Got some Jersey & Dallas in & even went back & watched more Atlanta. I started it Friday night worrying about Ozzie staying up through the night.

The sun broke through & ended up being a beautiful Sunday.  I went over & stayed with the horses for awhile just because it was so beautiful out..& then me & mom just say out & talked about the day & just amazed that this was the day 3 years ago my daddy passed away.  Honestly, it all still feels like some sort of horrible prank.  Cant believe we've had 3 years of holidays, of life experiences, a dang GLOBAL PANDEMIC - all while he's been gone. We joke about how we think dad would have reacted to all the craziness in the world the past few years.  But that's the thing, isn't it - life just keeps moving on - even with more crazy than you can imagine.

I miss my daddy so much every single day... even still. I know this ache is never going to really go away. 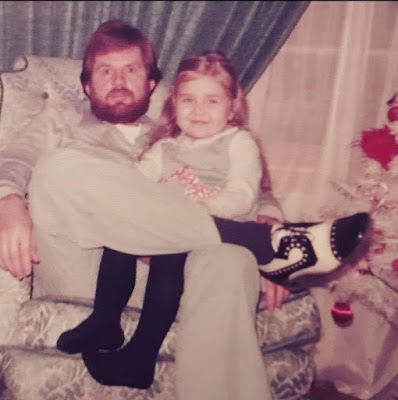 Do you get anxious when your animals get neutered?
Got any tips on taking care of your dog when they get home?
Do you watch Younger?
Team Charles or Team Nick?

Did you do any reading this weekend?